This was a really a meet-up that we owed each other for very long.

It was supposed to happen during the March holidays. And then, everyone was busy (Yes, when I say everyone, it means that there were supposed to be more than two people. Ah well.) Then, we were supposed to meet up last weekend, for a lunch and a photo shoot because we want to take ootds with the sudden growth of flowers in the country. Plus, someone wants to take photo with a kimono that she just imported in.

And then, it was cancelled.

But then, someone misses me too much to keep postponing our ‘date’… 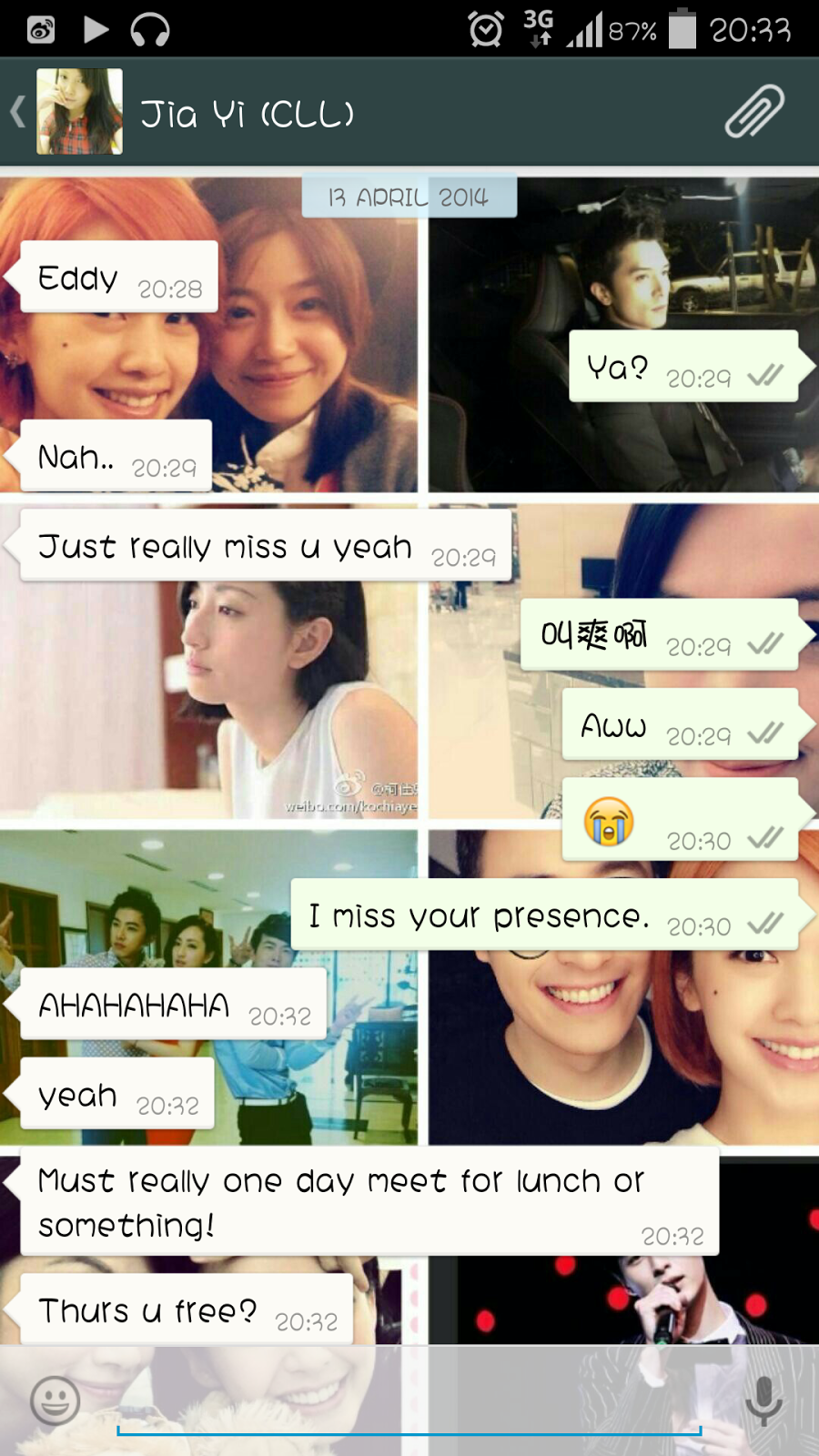 And so eventually, yesterday, on the last schooling day of the week, Edelyn is finally going to meet Ashlyn after so long.
Before I continue with recording down whatever happened yesterday, I must really explain who is this ‘Edelyn‘. And so the story goes like this…
On a random afternoon, the class committee of 13-1SR06 was trying to order pizza for some special occasion (in which I can’t really remember what exactly but yeah). Then since I’d never ordered pizza before and not sure about what I should really say to the operator (alright, I admit I suck in life but probably that makes me one of the best ‘taiji’ master in the history of mankind) and so I got my dear treasurer, Alicia to help me make the order. When the person on the other end asked for the name, she just conveniently used my name. Yes, I am using the word ‘conveniently’ because she said it’s just because I was the class representative. Oh well. An hour later, the pizza came and we went to pick it up outside the school gate. Eh? That’s not the main point actually. Just to make this paragraph looks kind of very long. I know I can get really naggy sometimes. STAPH. I took a look at the receipt. To my horror, YES INDEED TO MY FREAKING HORROR, the name was written as
‘EDELYN‘.
Nope, not the name of the operator who took our order over the phone. Because, it was written on that slip of receipt that the name of the customer is Edelyn.
Who on earth is Edelyn?!
The only valid reason Alicia and I can think of was that since it was Alicia who made the call, and the person was actually asking what’s Alicia name, which means, he was expecting a girl’s name. And Alicia, trying to be funny (or trying to be a better ‘taiji’ master than me) used the name ‘Eddy’. Since it’s over the phone, one doesn’t simply hear that clearly over the phone, and therefore, the person might have thought that Alicia said ‘Edelyn’.
This incident was eventually spreaded amongst everyone. And soon, Jia Yi (aka Ashlyn) kept on calling me ‘Edelyn’. But she loves to use the spelling of ‘EDDELYN’.
What to do? Because I seem to be more of a feminine guy, Edelyn seems to be my alter ego. A legit alter ego (Apart from Eddster and Edward, as given by Ratna). Ohgod, how can one person has so many legit nicknames? :’D
Getting back on the topic, I arrived at nex an hour before our meeting timing in order to shop for present for Ashley’s (read carefully, AshLEY, not AshLYN) birthday the next day (in which will be elaborated on in my next blog post). I went around to find a shop that sells laksa in that mall because someone told me she got that sudden craving for laksa. I found one, but because it’s a rather small shop and it’s during the evening peak hour when every Singaporean just decided to eat outside after work because they are lazy to cook something for themselves back at home. Or simply, they can’t cook. No wonder my previous colleague told me that it is really stressful to work in the local F&B scene. Because we Singaporeans really knows how to eat and these F&B outlets will always have customers round the clock and it is extremely tiring to handle the lunch, dinner and probably supper crowd.
The queue outside every eateries and restaurants I could find there was simply long. Probably as long as the queue outside any Singapore Pools outlet before the Chinese New Year lottery. I really think that Singaporeans will probably queue for two things without much complaints: Food and 4D/TOTO.
Went round and round the mall before I got that phone call from Jia Yi that she had reached the mall from school. It took me quite sometime to locate where she was.
And it took me quite sometime to take here to that one and only shop that sells laksa. (Whoever who chose that location for that shop deserves a smack right into his/her face. Because that location was so far away from the core of the mall. Who would have notice that shop if they doesn’t cross that place. And I swear, not many people walk pass there, at least from what I’ve observed.) At the same time, Jia Yi thought that I deserve a slap on my face for bringing her around in circles.
But because of the crowd, we decided to walk around more circles before we decided to settle down at Ajisens. We could have go around in more circles if not for my assurance that I can treat her for anything below S$20. (I can’t be afford to be very generous. :P)
Ajisens was damn high tech, I swear. This is how we order our food: 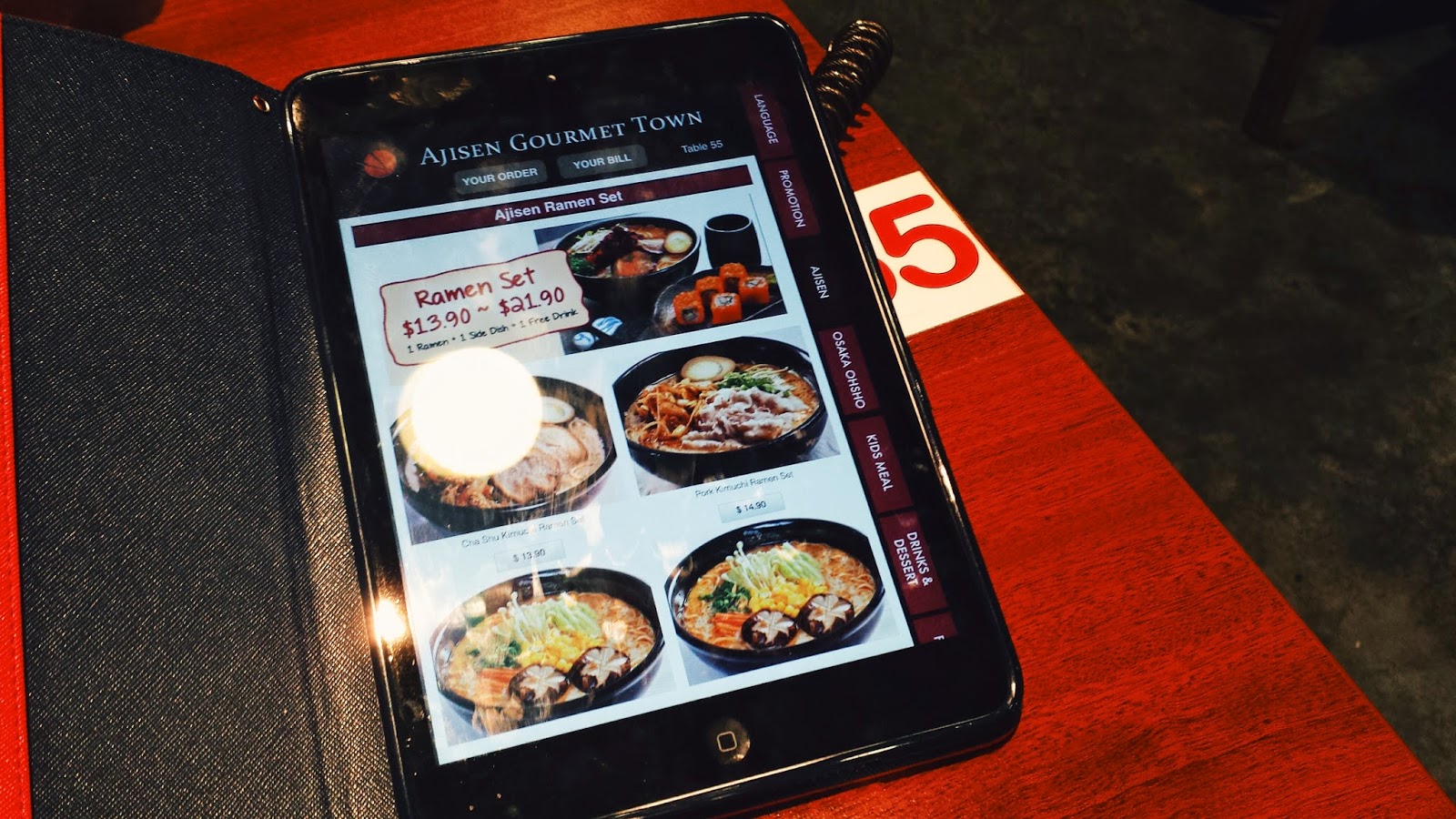 Now, how cool is that. Using a iPad provided by the outlet to order food. It makes thing so efficient that there may not need too many waiters and waitress to take your orders and they can all concentrate in delivering food out to the tables. And there can never be a mistake in any orders and if there is any, it’s the fault of the customers themselves. THIS is an idea worth adopting for F&B enterprises of the 21st century. (But do remember to lock your devices more than securely because you’ll never know which joker decided to bring this back home and tries to mess up your order next time by ordering everything on the menu and yet you didn’t know the existance of such customer.)
We took quite long to decide on what we want. Because everything seems rather delicious.
And everything was decided rather quickly when someone said, “Lao Niang（老娘）is very hungry already.”
We chatted so much while waiting for the food. From whatever happened to the school, to how she’s being late for school, to how interesting the new DM is, to things about her family.
I felt kind of guilty because I didn’t speak much about my family to her when she asked about it. Probably either I really have nothing to talk about my parents or I am oblivious to everything around me.
The food arrived and we continue to talk while eating. AND HERE’S PICTURES OF THE FOOD!!!! (I know I’ve been typing too much here and I am really looking forward in posting these pictures here in this post.) 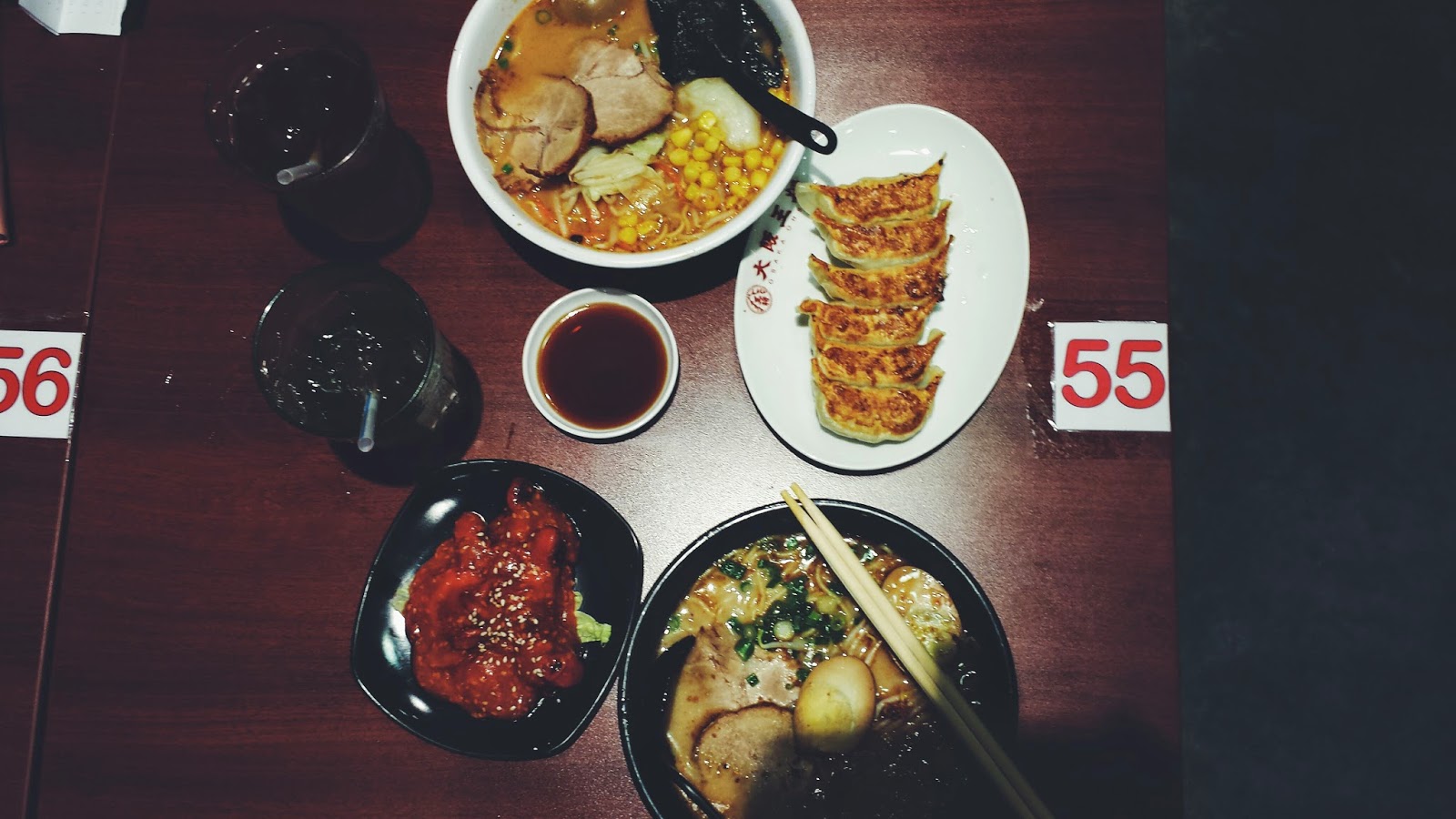 An overview of our food! 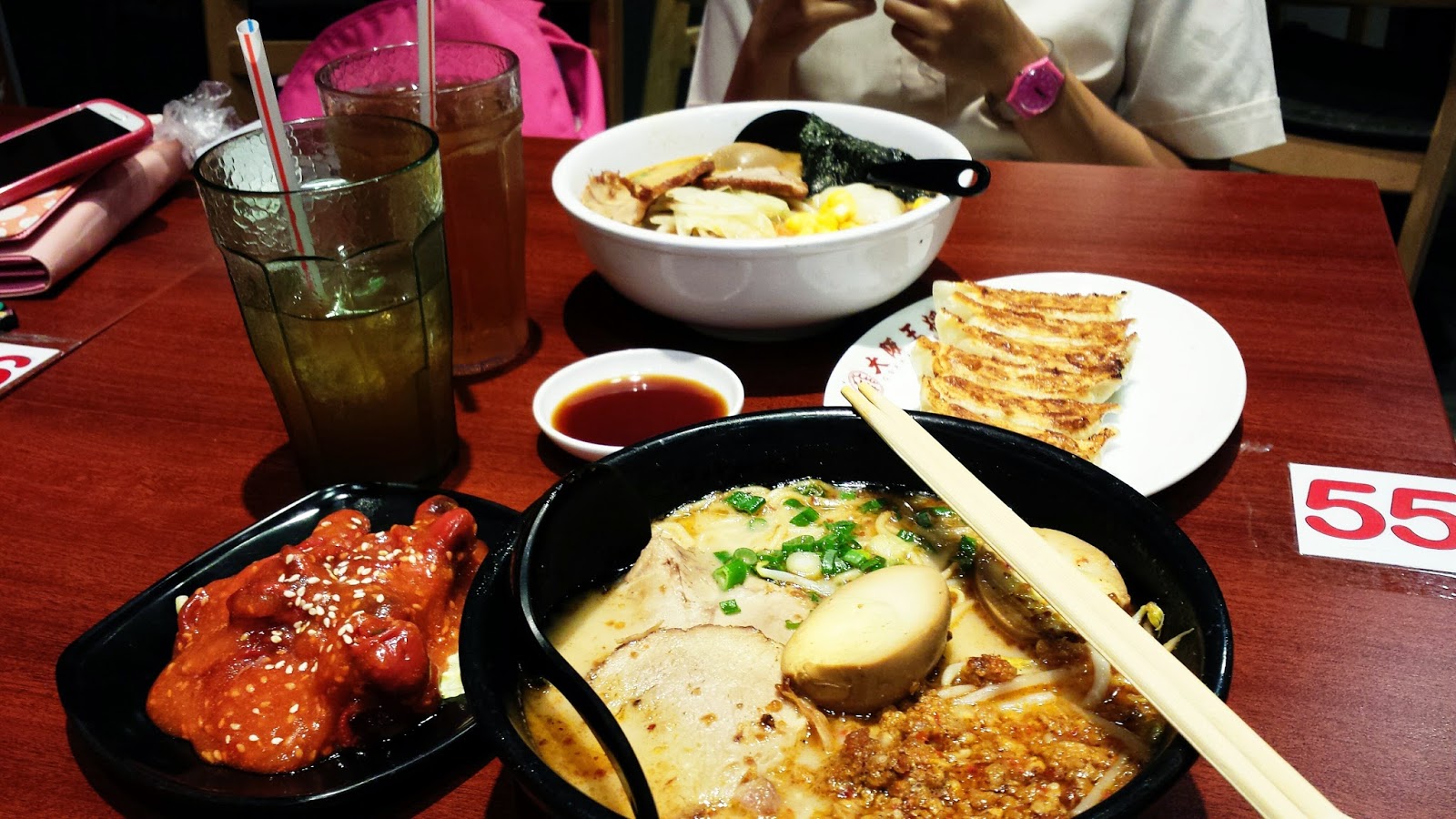 A shot from my point of view. 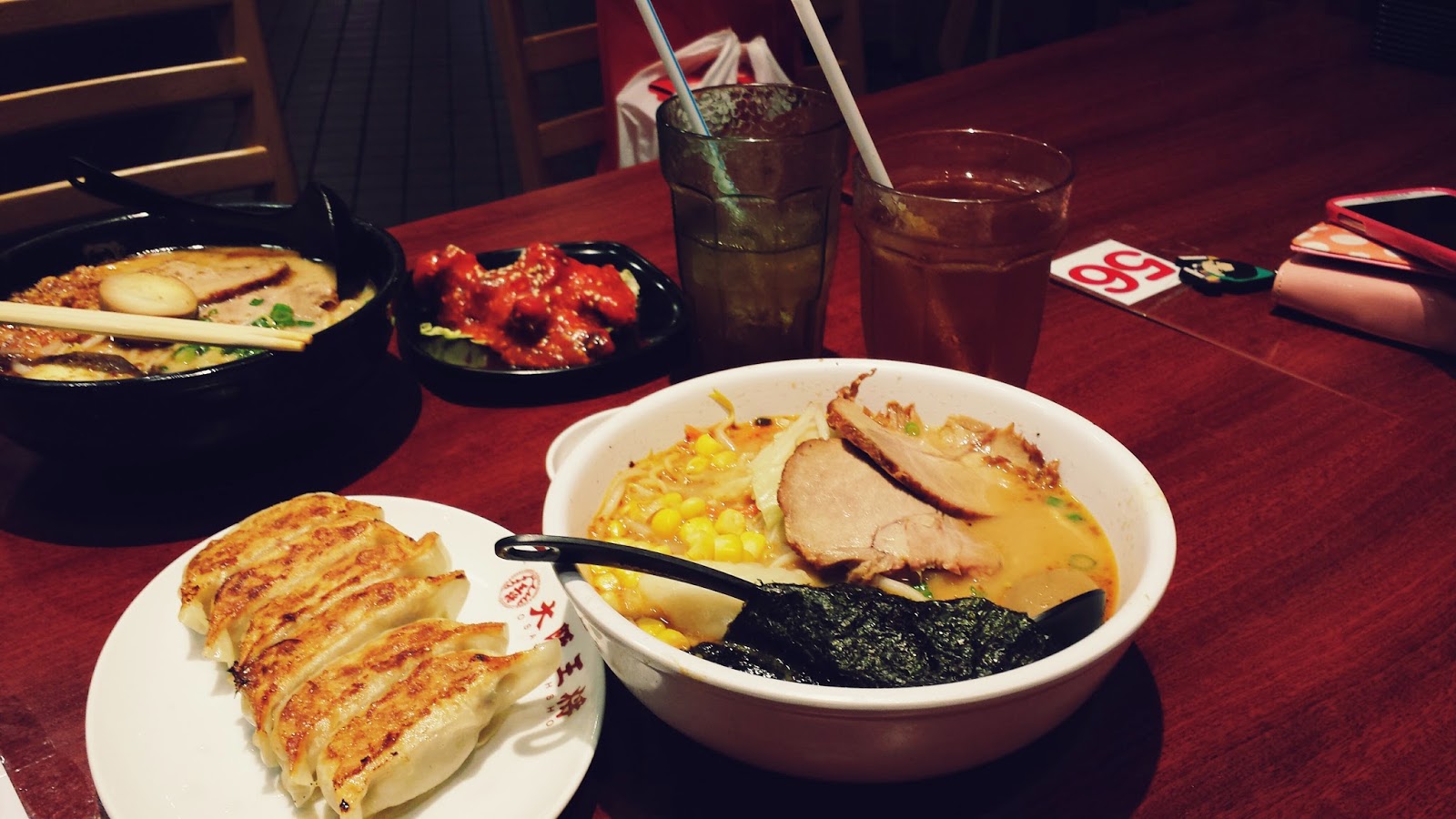 A shot from Jiayi’s point of view. 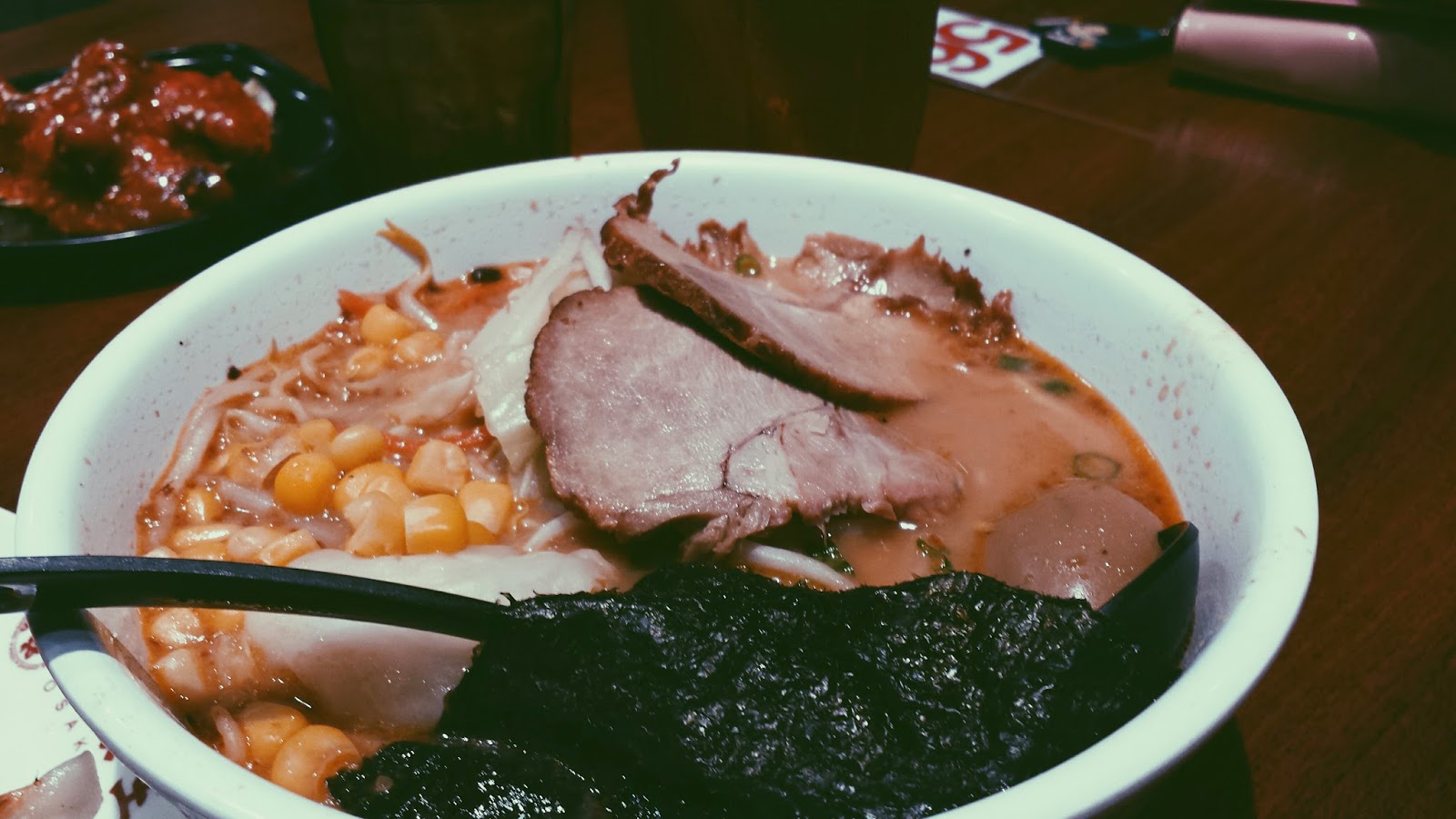 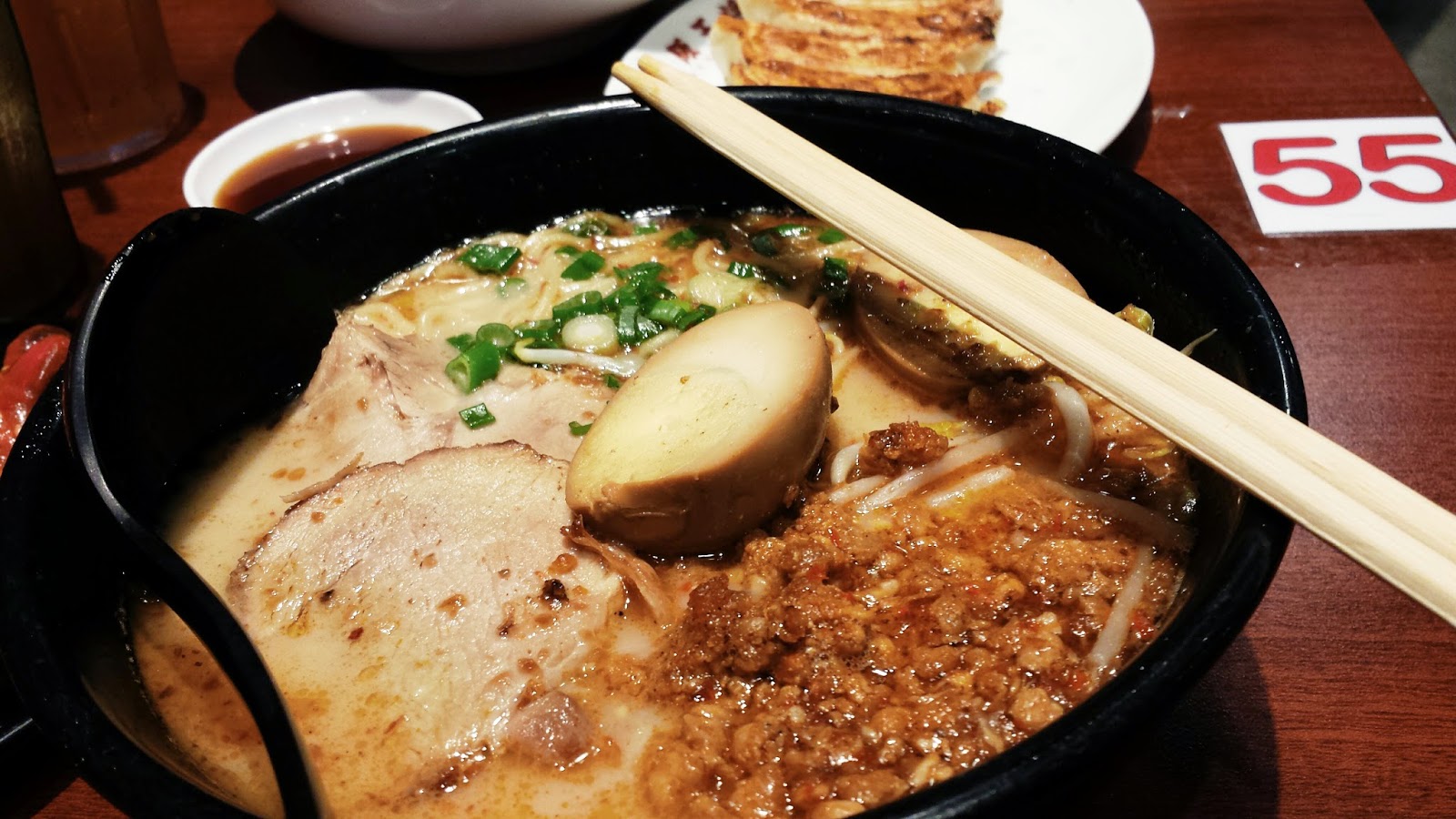 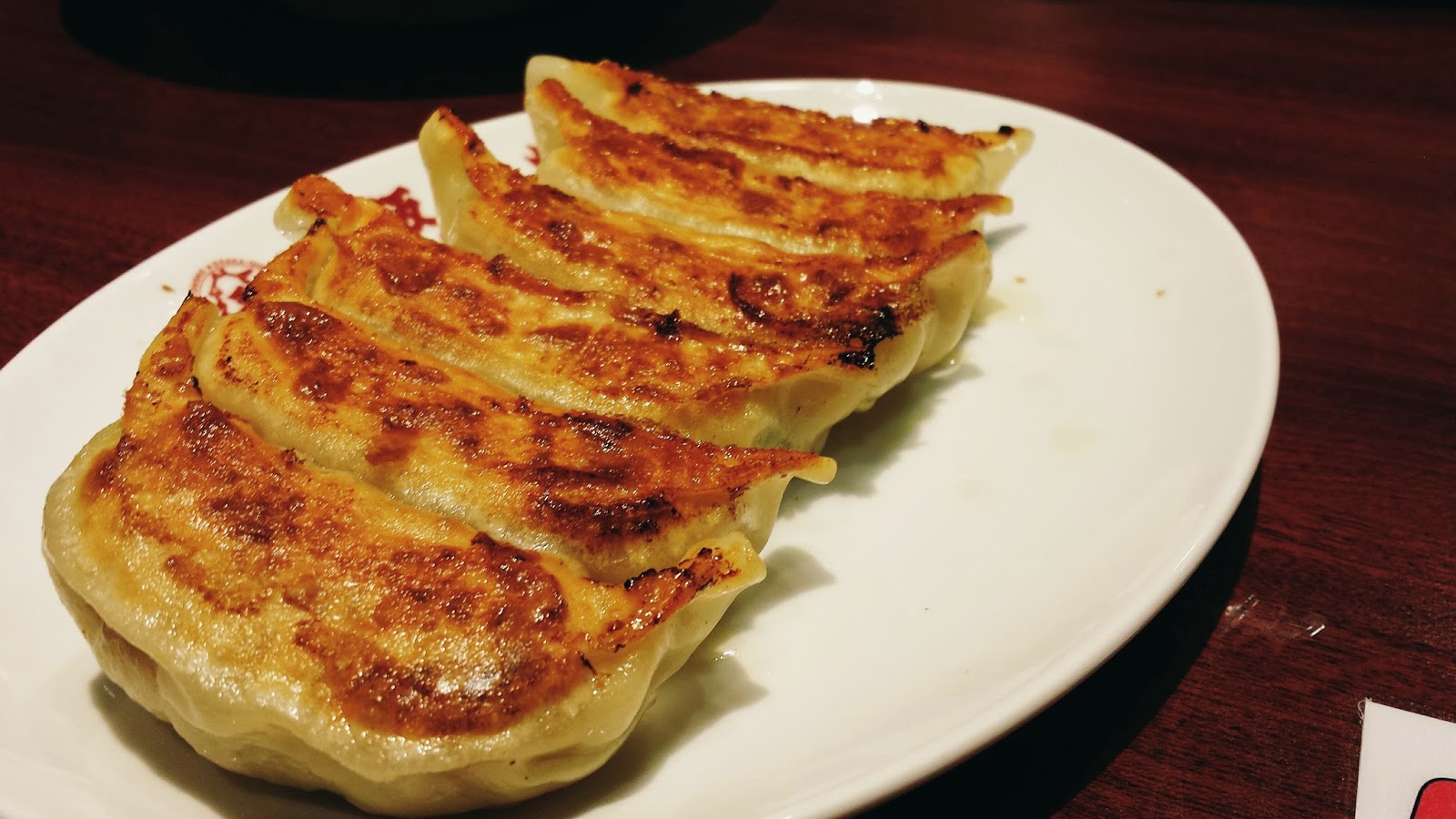 One of the best looking ‘foodporn’ I’ve ever taken. 😛 / 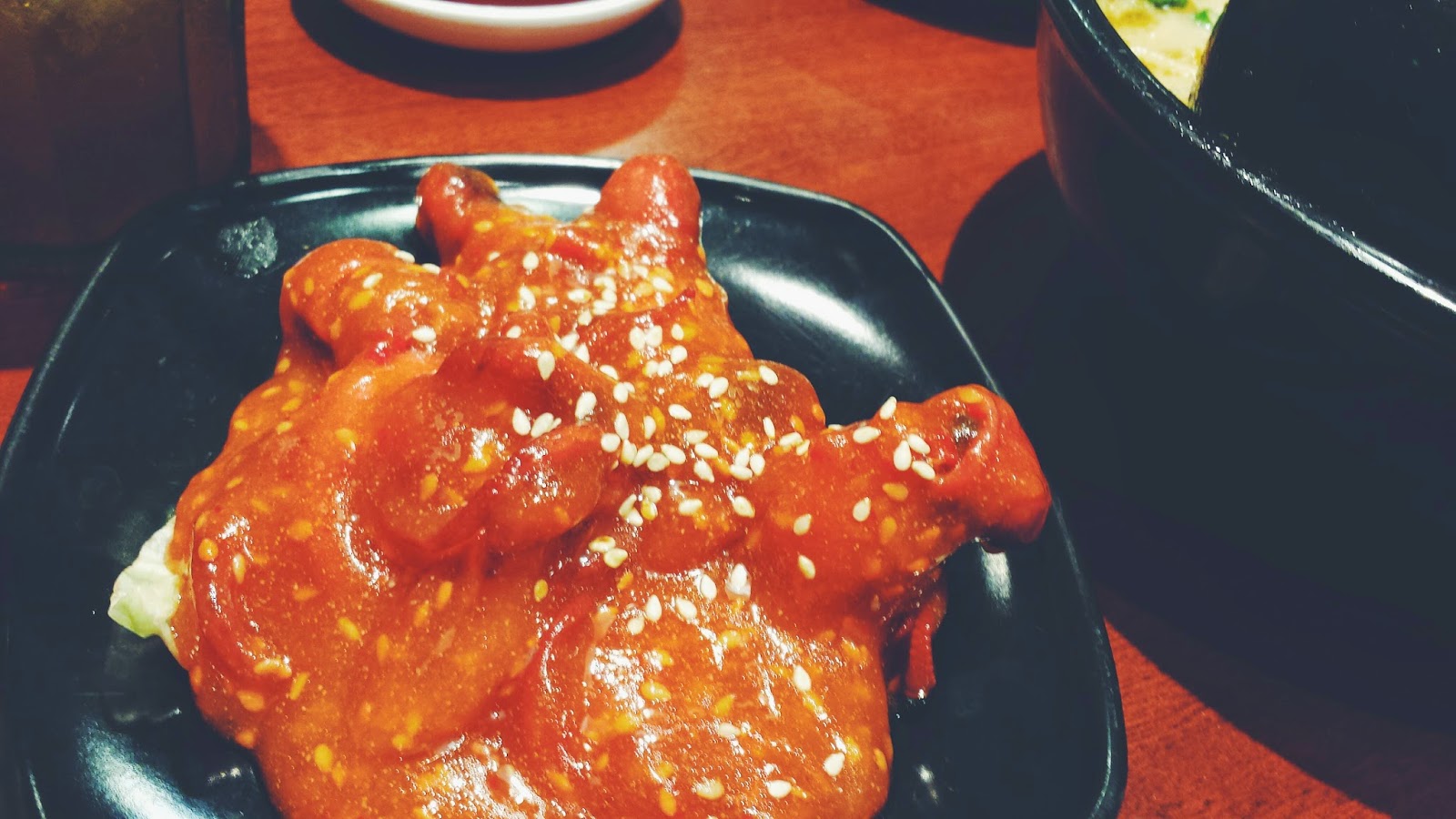 OCTOPUS! I really love the sauce!
While eating, Jiayi also told be about her experience of her trip to Hokkaido. She LOVES Japan a lot. If her future boyfriend/husband is reading this, please remember to take her to Japan, because she really likes that place a lot. You could see her uncontrolled excitement when she’s talking about Japan and its street food and how different the Japanese cuisines are between Japan and Singapore (I mean, obviously the difference must be really large). Sometimes, I can really imagine her marrying a Japanese boy. And her wedding gown will be some sort of traditional Japanese kimono. Well, I am not as delusional as someone is when talking about her future with er… some guy.
ARE GIRLS REALLY THAT DELUSIONAL NOWADAYS???
Really had a great dinner, one of the best dinner I had since the start of this year. The food. The company.
And here’s a selfie before we parted for home (I mean, how will Dr. Chua forget about taking selfie during or after a meet-up with anyone? Especially those whom I won’t get to meet often!). 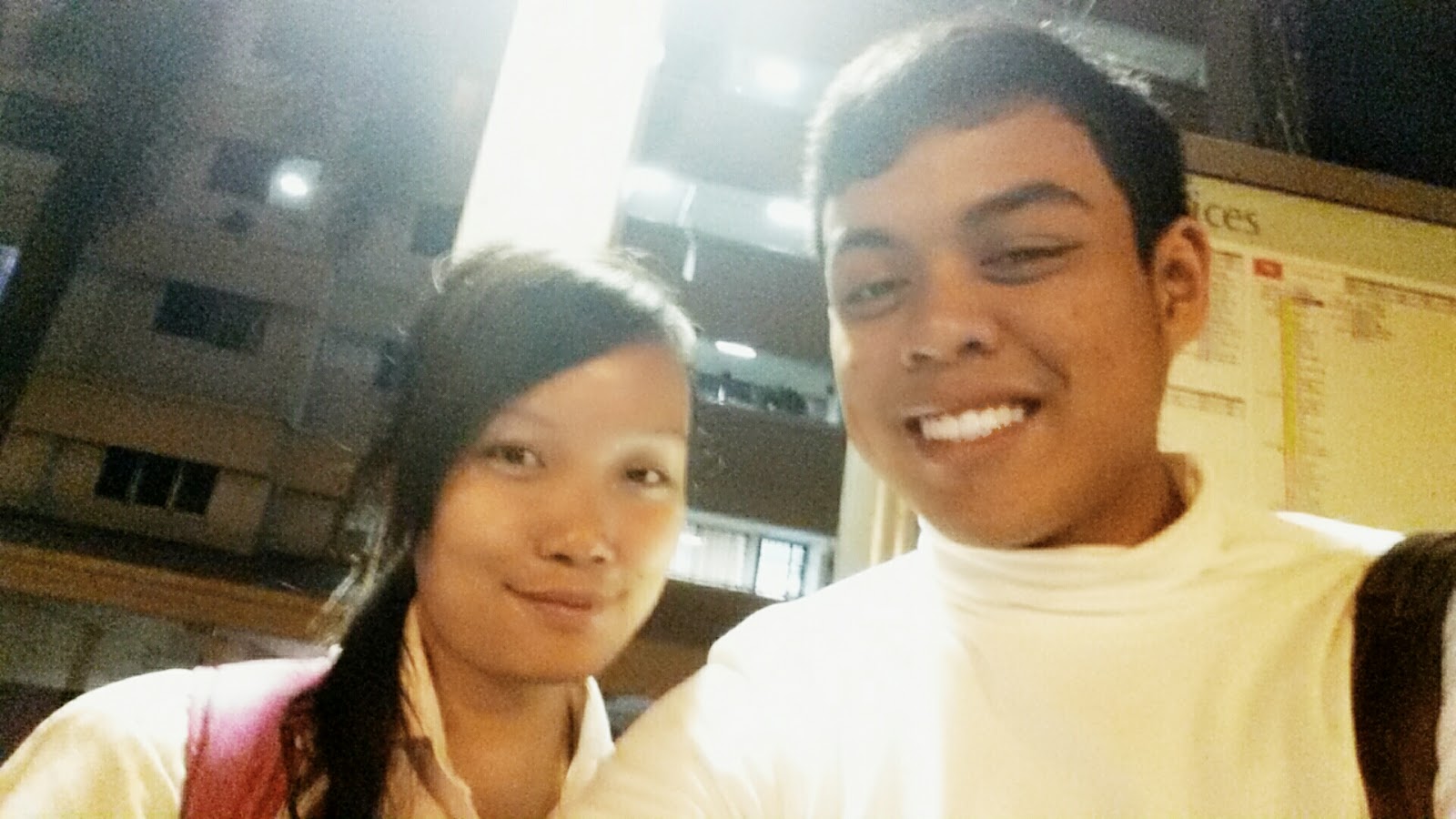 In Jia Yi’s words, we two look damn sian after a long day.
Edelyn will be looking forward to the next meeting with Ashlyn. Which we don’t know when that will be.