It seems like I’ve been involved in a lot of film production for the past one month. From one Year 2’s project to another and then to the other. Alright, maybe not a lot but it’s really a lot for me. Ever since leaving SR Drama and SR, I turned freelance. And yes, that’s one of the reasons why I decided not to join any CCAs (Ya, not even the English Drama and Chinese Drama Clubs in NP). Being a freelancer seems pretty nice, and ya, pretty free too. I can go around doing anything I want, going for different auditions, and yep, knowing different people. 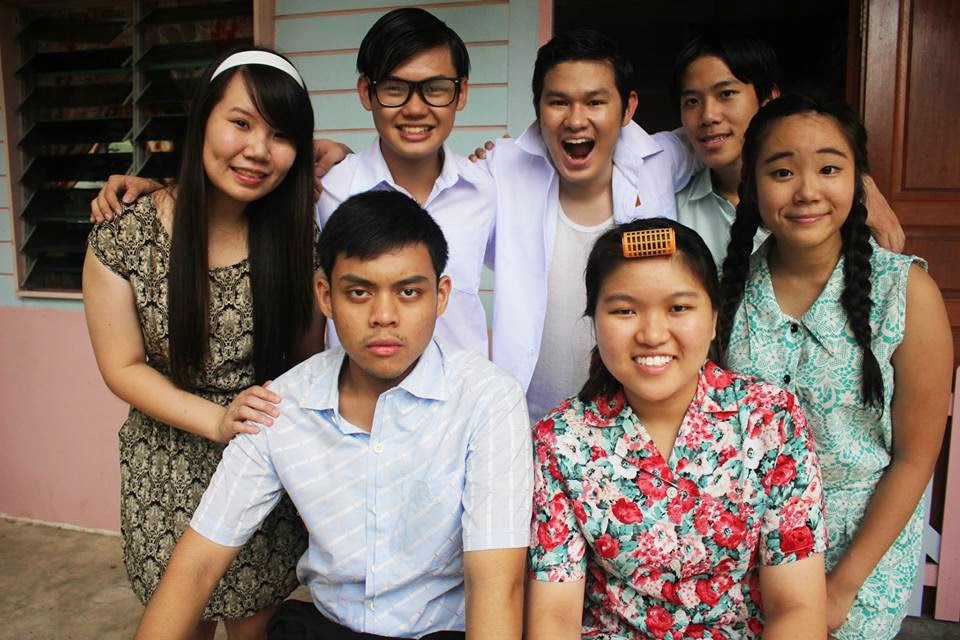 My first ever on-screen production with Wanderlustories. 🙂
Ok, I realised I don’t have any photos for the second production I am involved in. Haha. That’s because I am only one of the small small calefares. 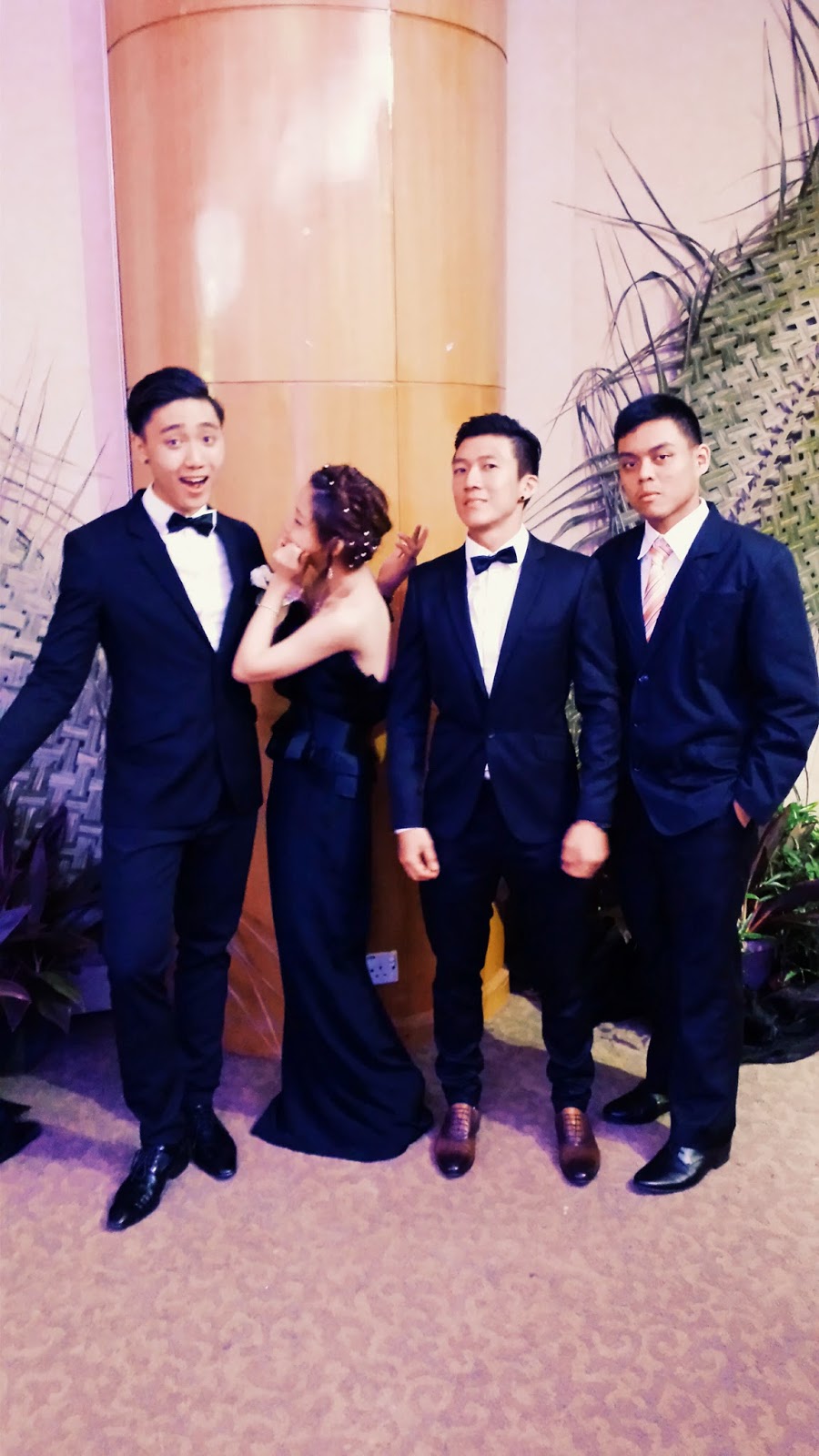 Although for this 3rd production I am involved in this year, I was also a calefare, but I managed to take photo with the 3 lead casts! (From left: Ian, Siqi and Kevin)

And now, after my involvement in various productions, I realised I enjoy my time in front of the camera as much as being on the stage in a relatively large theater.

Talking about being on the stage, it has been one year since I’ve performed in front of many people in the theater.

Yes. One year since performing in ‘Thespian 2013‘ with my beloved SR Dramateers.

It was the best show I’ve ever involved in. The passion of everybody, every single one of us, makes the the entire show a successful and memorable one. 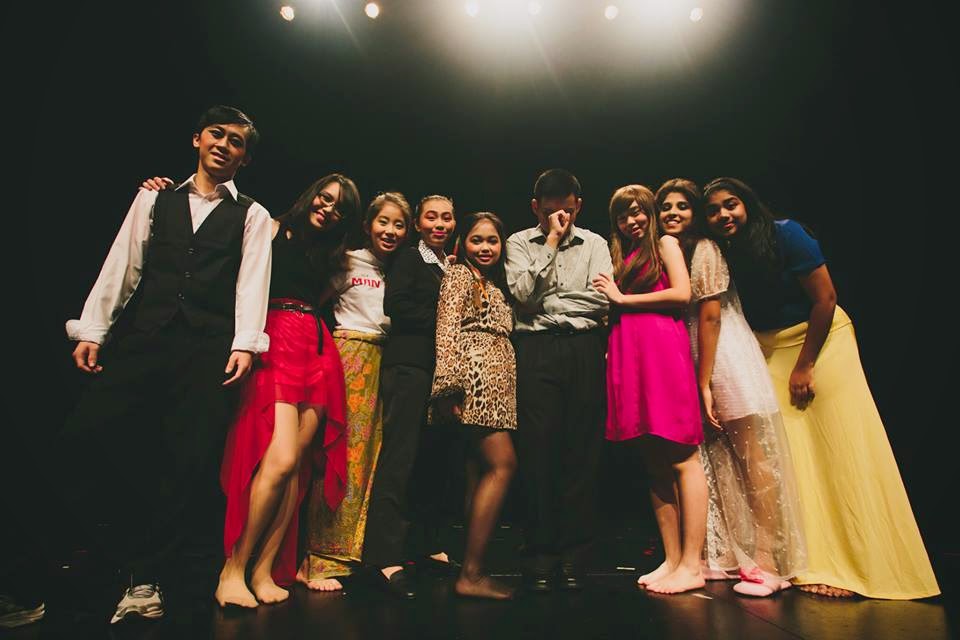 With my ‘7 Deadly Princesses’ (one of the acts in the show) cast members (From left: Zhirong, Donna, Denise, Yap Qi, Zainur, me, Kheng Yin, Jishna, Shafa) 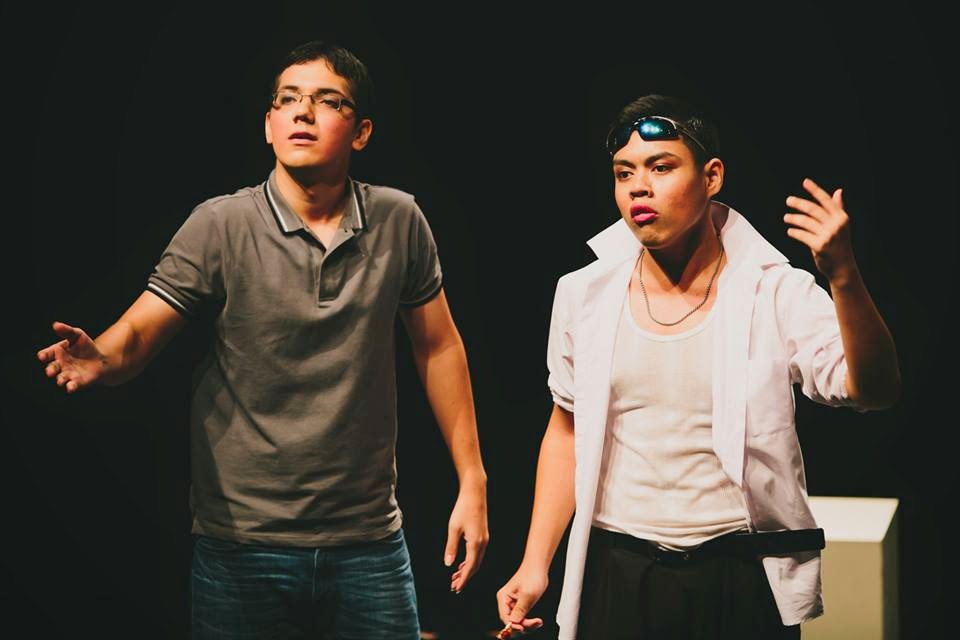 One of the scene in another act with Annas (I know I looked very ‘beng’ here).

Acting has always been a part of my life. Okay, it’s more like MY FORM OF LIFE. Actually, I think acting is a form of life for everyone. Like what I’ve shared in a presentation to my class last Thursday, everybody is capable of acting because we’ve been acting throughout our entire life.

Ok. That sounds really insulting to some people.

What I mean is that, we have had portrayed different kinds of emotions in various events in our life. Everyone definitely had portrayed such emotions before: 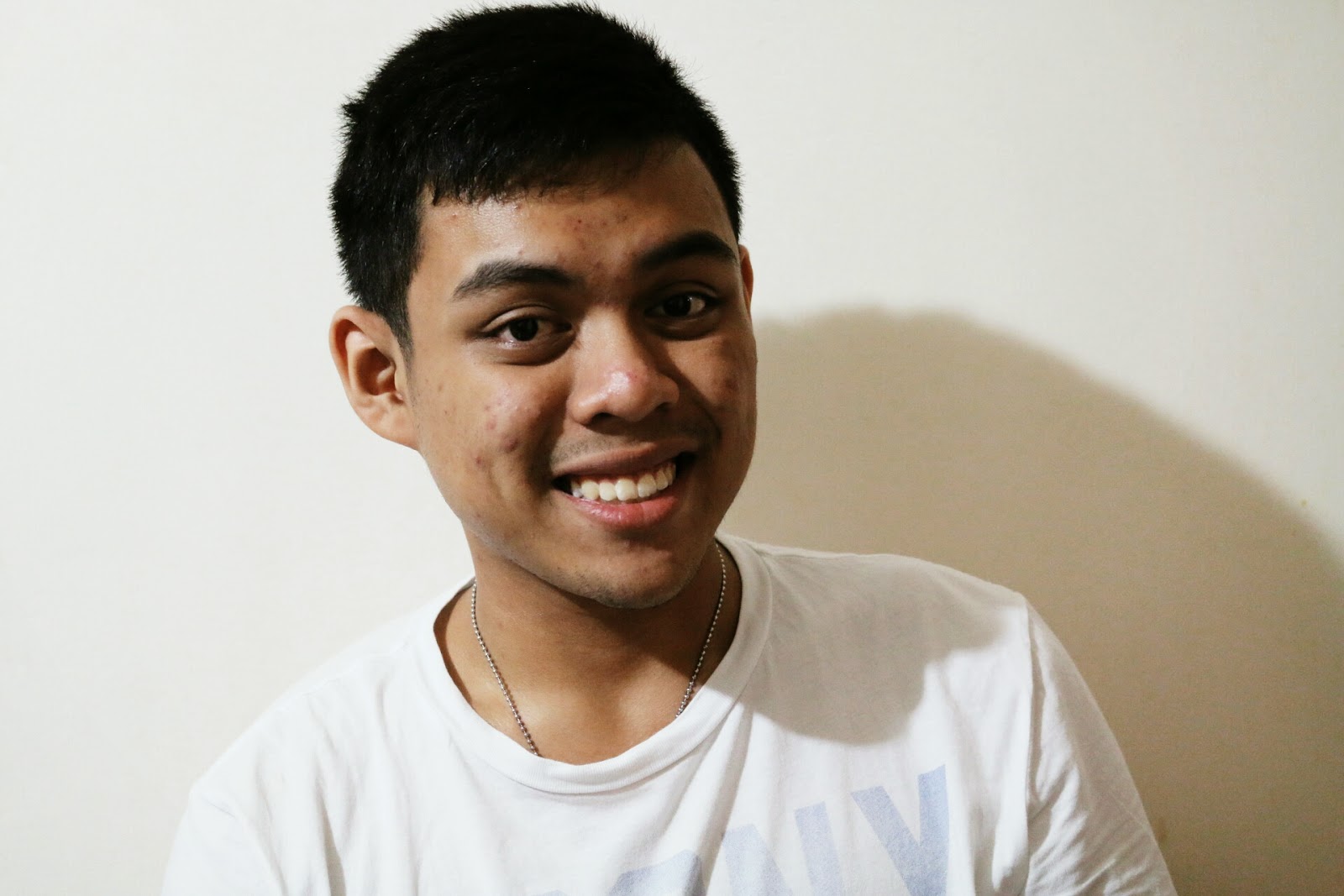 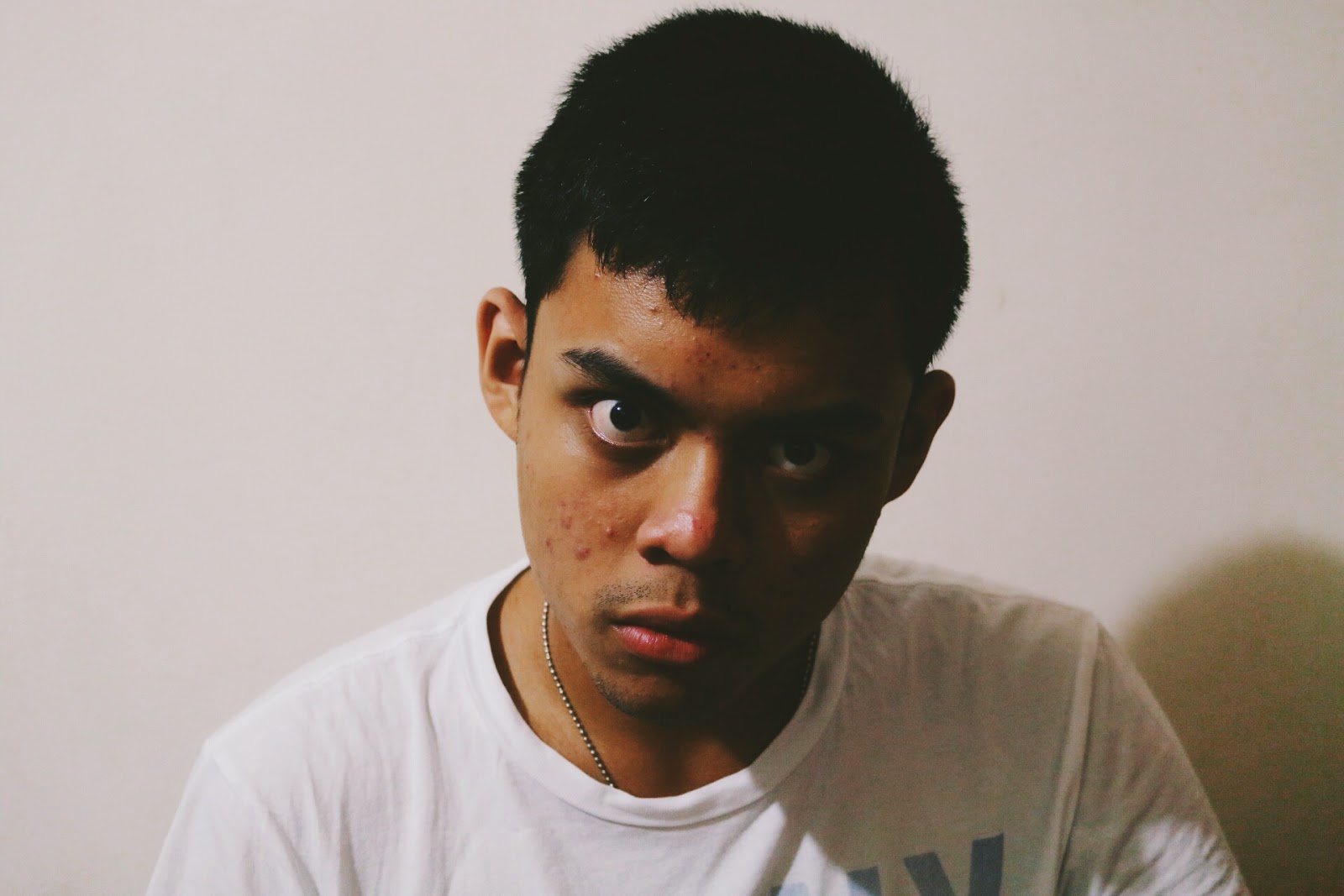 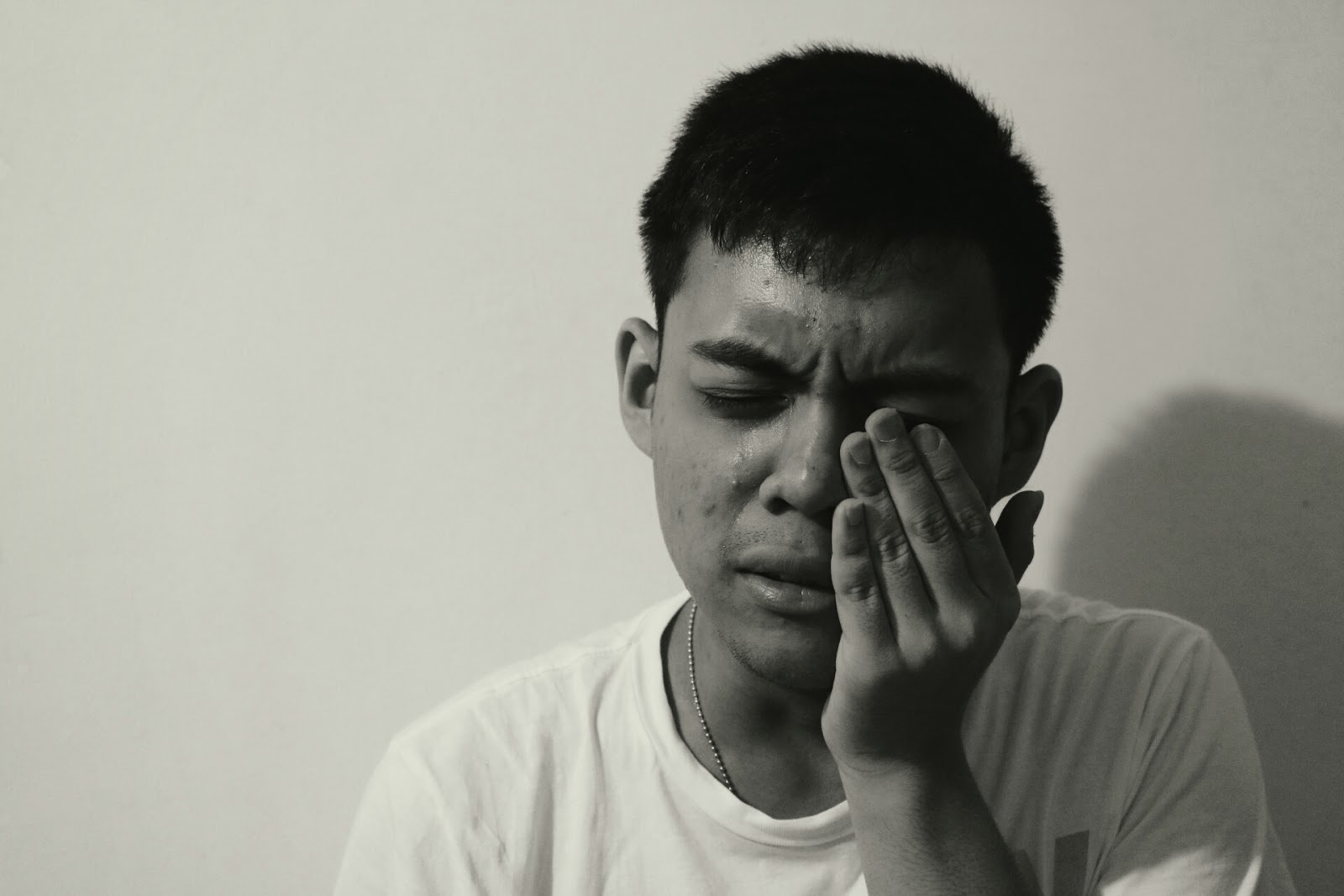 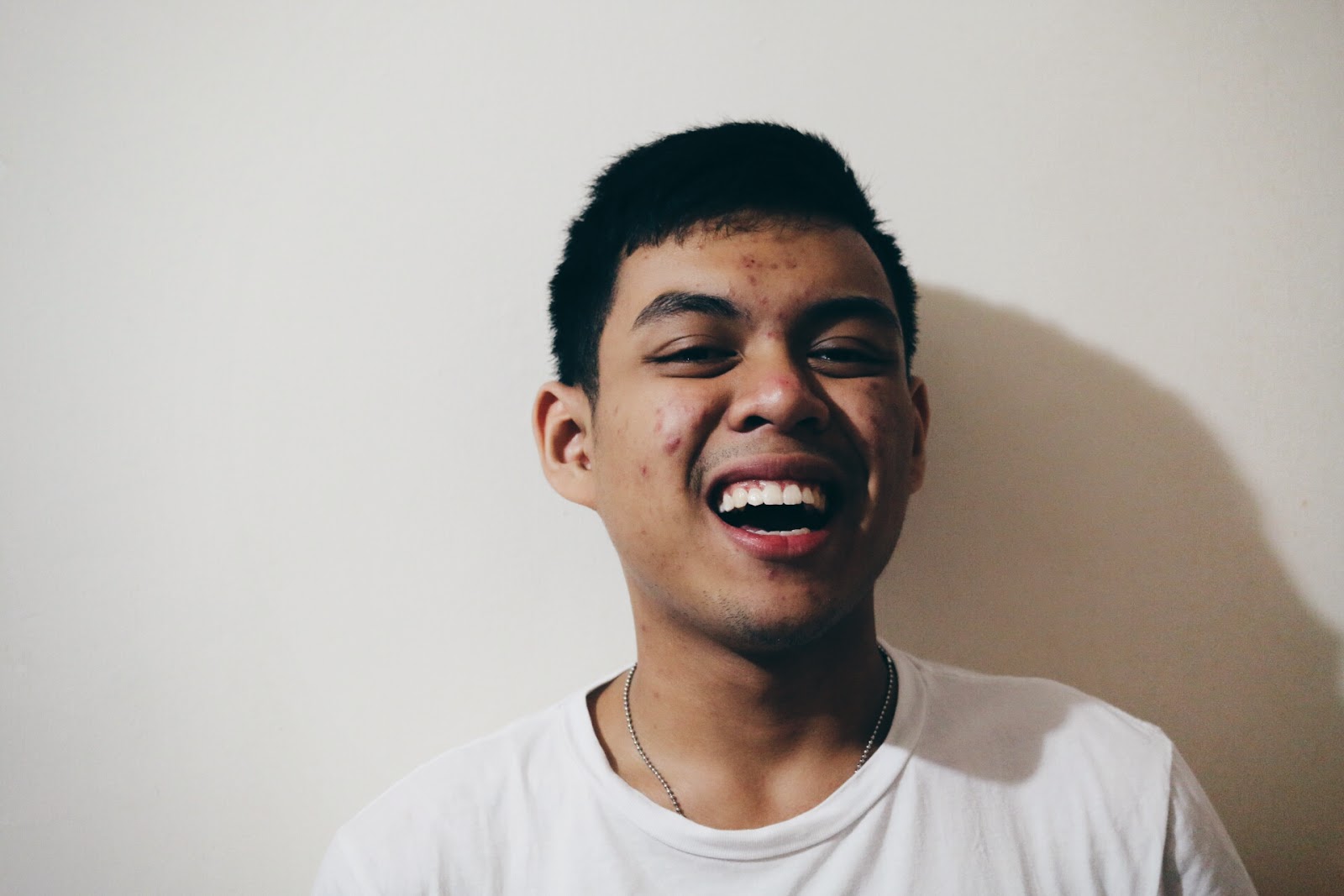 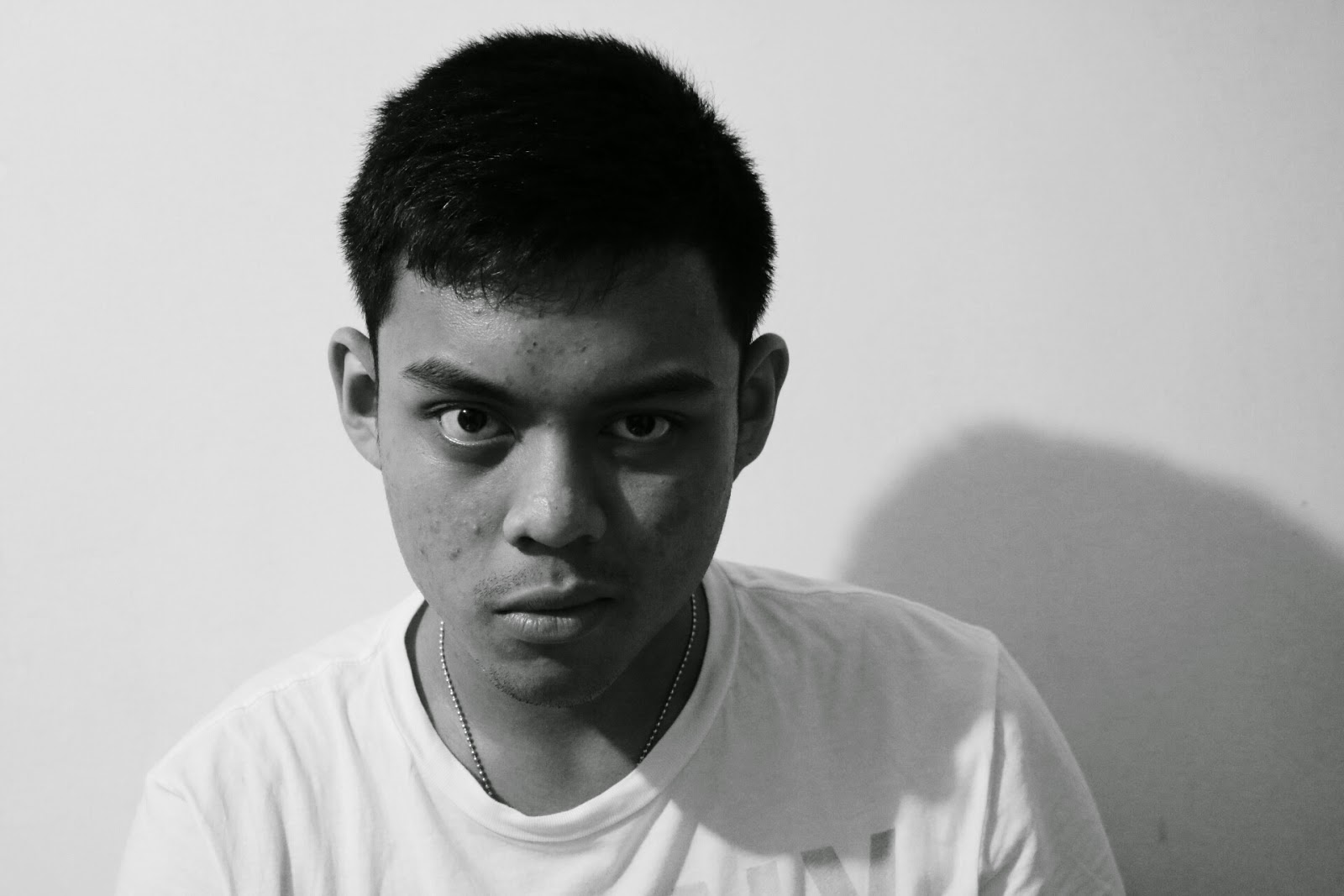 Sinister.
(Alright, I don’t know what sinister is here, but well… I know this is kind of really really extra. Who in the right mind will portray a sinister look, unless you are some sort of bad-ass villain from some Taiwanese soap opera. Ya’ll know what I mean?)

DRAMA IS MY FORM OF LIFE
And hence, with that, I think I somehow know what I should be doing in life.
Yeah. Act.
As long as there’s an audition, and I get to know about it, I will definitely try my best to go for it.
Like one audition for an upcoming film (not saying which film until when I am really involved in it :’D), which I got to know about it through Yundi (a Year 2 friend of mine, also from CMC). Initially we were supposed to go together but then something happened to her phone so she informed me through Instagram that we both go separately.
The audition was on Saturday and it is divided into two sessions: 1pm – 3pm and 4pm – 7pm.
Initially, I intended to go for the 1pm – 3pm session but I was too tired from staying up late to watch a World Cup match between France and Germany (And sadly, France lost 🙁 ). I woke up late, decided to have lunch at home before heading out for the audition.
The audition venue was at *Scape, so I reached there at around 4pm. Just nice. Then, I suddenly doubted my decision.
Should I really give it a try?
Am I capable of it?
What if I don’t perform up to my usual standard?
I know I can be really doubtful about myself sometimes.
Okok. I admit, not sometimes but in fact, MOST OF THE TIME.
It’s already after 4pm.
I stood right outside *Scape, where all the bazaar sales were held. The number of people there was overwhelming (I am referring to the huge crowd who were looking and shopping at the sales). I took a breathe, adjusted my shades, and walk forward.
Then I saw quite a couple of stalls selling phone casing, so I decided to take a look.
A few caught my eyes, like:

(Image: Agnes-Maurice)
Of course those on sale wasn’t the real stuffs.
I wanted to buy but… 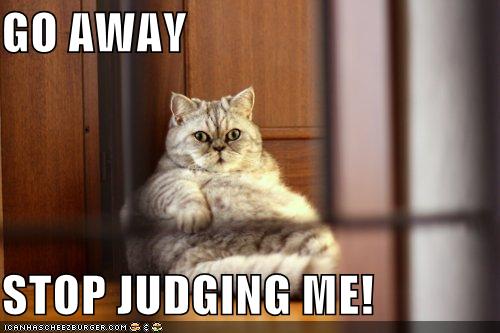 (Image: Cheezburger)
I know people will judge me once I use that casing. I swear. Like how everyone judged my previous phone casing.
ALRIGHT.
I digressed too much. Maybe I shall return back on track.
So where was I? Ohya, the audition. I loitered around for like at least 20minutes before I went to sign for the audition at the second level.
Initially, I thought it will be a scripted audition but no, there was no script and they told me that I have one minute to impress the judges (who are actually the casting directors).

(Image: memecrunch)
That wasn’t shit, but it came too sudden. I had filled up my name and it’ll be rather awkward if I tell them I don’t want to audition for the film already. I picked up my balls and decided to just do it.
I wandered around the 2nd level of *Scape trying to find ideas on how to impress the casting directors in 1 minute. I ran out of ideas.
Sua, just go in and either do or die.
I was panicking till I forgotten that it was my turn. I stood in front of the registration counter and the organiser saw me and lead me in.
Here’s a change in story plot.
As I went into the waiting area, the organiser grouped me and 4 other participants together.
A girl who looked kind of like the same age as me.
A guy with 3 tatoos on his rather muscular arm.
A guy who looks like caucasian.
A guy who looks a bit older than me, maybe 20?
The five of us were told to come out with a skit together and perform in front of the casting director.

(Image: Captionite)
Indeed really awkward.
Everyone I know told me that I am actually an extrovert, but to me, I am not really one in reality. So, when I was told to work with 4 total strangers, it came as a shock for myself. A total shock.
LUCKILY…
They were all very friendly people and they make me feel rather comfortable. Within 5 minutes, all of us were seen talking and laughing, as if we were very close friends. :’D
We came out with a rather hilarious and long (according to the casting directors) skit which we think impressed them a little.
The 4 guys were given a script from one part of the film to try out. We went out to prepare, and return back in again.
It seems rather successful, I think. Hmm.
Well, at least the four of us look rather beng. But I think I still look damn awkward with the camera in front of me despite being part of several on-screen productions, which I mentioned earlier on.
WELLWELLWELL…
At least I didn’t regret coming to the audition because I GOT TO MEET NEW FRIENDS! 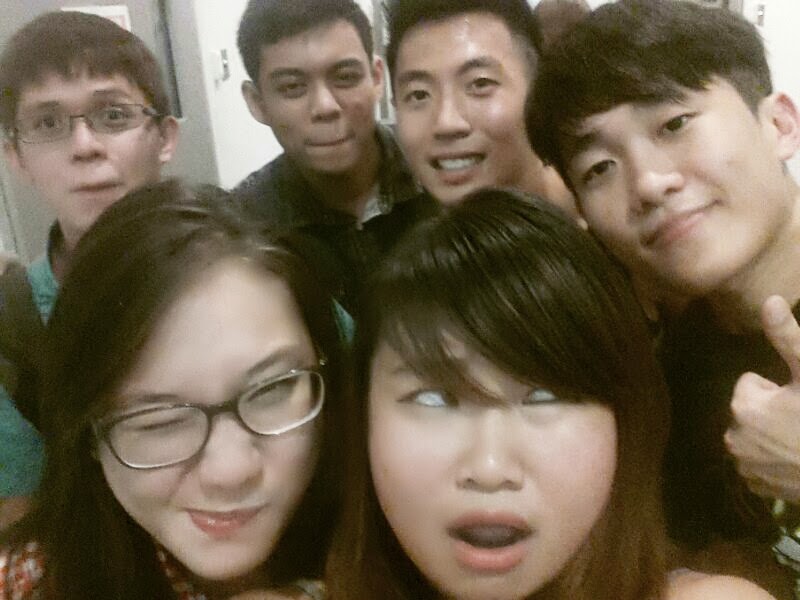 2nd Row, from left: Joel (who is NOT Caucasian), me (who, contrary to popular beliefs, is NOT Malay), Wayne (the one with 3 dragon tatoos which actually are fake ones :’D), Wizza)
1stv Row, from right: Yiling (who has a really great vocal talent and is from NP) and Melissa (who was just accompanying Yiling to the audition and was actually my schoolmate back in Townsville Pri — and neighbouring class somemore) 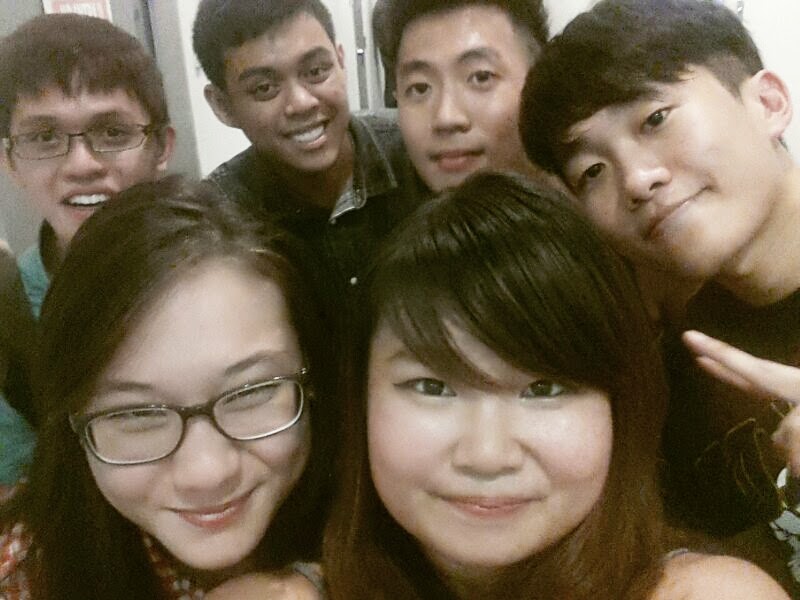 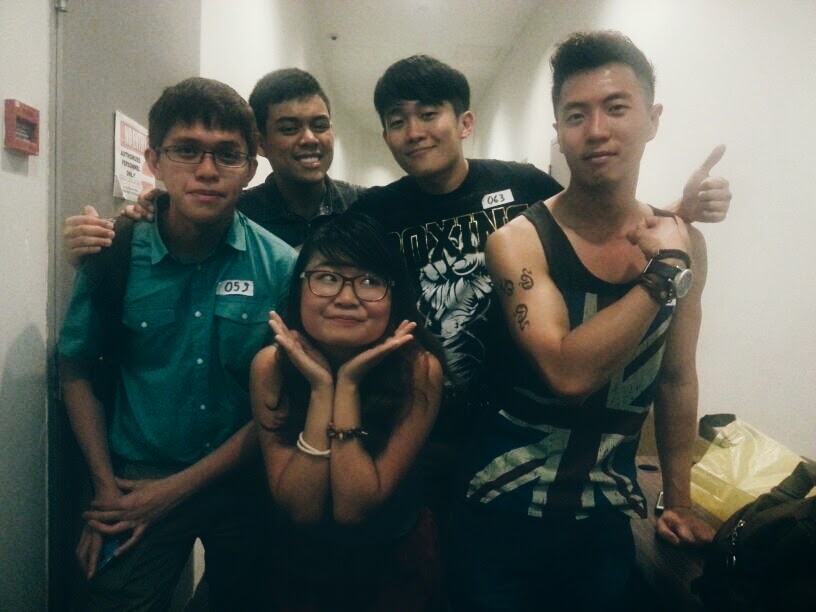 I swear the tatoos looked freaking real. :’D
So, after the audition, the few of us (without Melissa, I think she had dinner at home) went to have dinner at Aston’s together. I can’t believe all of us can make rather good and close friendship after just a relatively short time together!
See, this is how acting can be a form of life.
It brings you the unexpected. 😉