Skip to content
I can’t really exactly remember when’s the last time I actually saw Jiayi (aka Ashlyn) face to face, other than hearing her voice late at 11PM for the past few days when I was tasked to wake her up from her nap so that she could continue with her studies. Hmm… Maybe ever since April 18 (that’s like just few days before the start of my Poly life, but I wasn’t really sure if that’s exactly the date but the date on the blog post said so…), when we went to have Ajisen at nex.
Seeing her face again is so much different, I am referring to the feelings, compared to hearing her voice.
Alright, I admit that’s my feeling to every single of my very good friends.
That thought of finally being able to see her again after so long made me look forward to it since the start of the week.
Today, it’s Teachers’ Day. I actually didn’t realise it until er… two days ago, when Andrew Tham was asking if anyone is going back to AMKSS. Despite me looking forward to this so-called er… date, I wanted to head down to AMKSS with Tham. Then I realised only yesterday that… Oh Shit, I’ve actually got an appointment that morning.
And not sure if I should use the word ‘luckily’ or ‘coincidentally’… Ok, maybe any of these terms are not suitable for such context… Tham fell sick and he was not able to go down with me to AMKSS to pay a visit to our teachers there. (GET WELL SOON, THAM. IF YOU DON’T, GO SUCK THUMB.)
Well well well… So much of digression. So, it was Teachers’ Day today and Ashlyn had school till 11.30am. So, I decided to wait for her inside Kovan MRT Station (Phew, I was so well hidden that no one from SRJC actually saw or recognise me HAHAHAHAHA :’D).
From there, we traveled all the way down to Expo MRT Station, where Changi City Point is. Initially, she wanted to have lunch at Izakaya Bar. I was like asking her if they actually sell kaya bread on Whatsapp last night when she mentioned it.
Apparently, it doesn’t.
We tried going around to find that shop, but we were too hungry and less bothered to continue further. In the end, we settle down for this shop called Yomenya Goemon.
“Let just eat Yomenya Goemon.”
“Huh, what? Doreamon?”
“Is Goemon, not Doreamon.”
I swear Goemon must be some monster. You see, Digimon is digital monster, Pokemon is pocket monster, I am sure Doraemon must be dorayaki monster (you see, he LOVES dorayaki).
>> Too bad though, Goemon is just a given name for males in Japan. Ah, well.
We ordered the same spaghetti: Mediterranean Tomato Cream Soup Spaghetti with Fresh Seafood.
It’s my first time trying out soup spaghetti.
And my reason for choosing it? It looks good on the menu.
So here comes all the food… 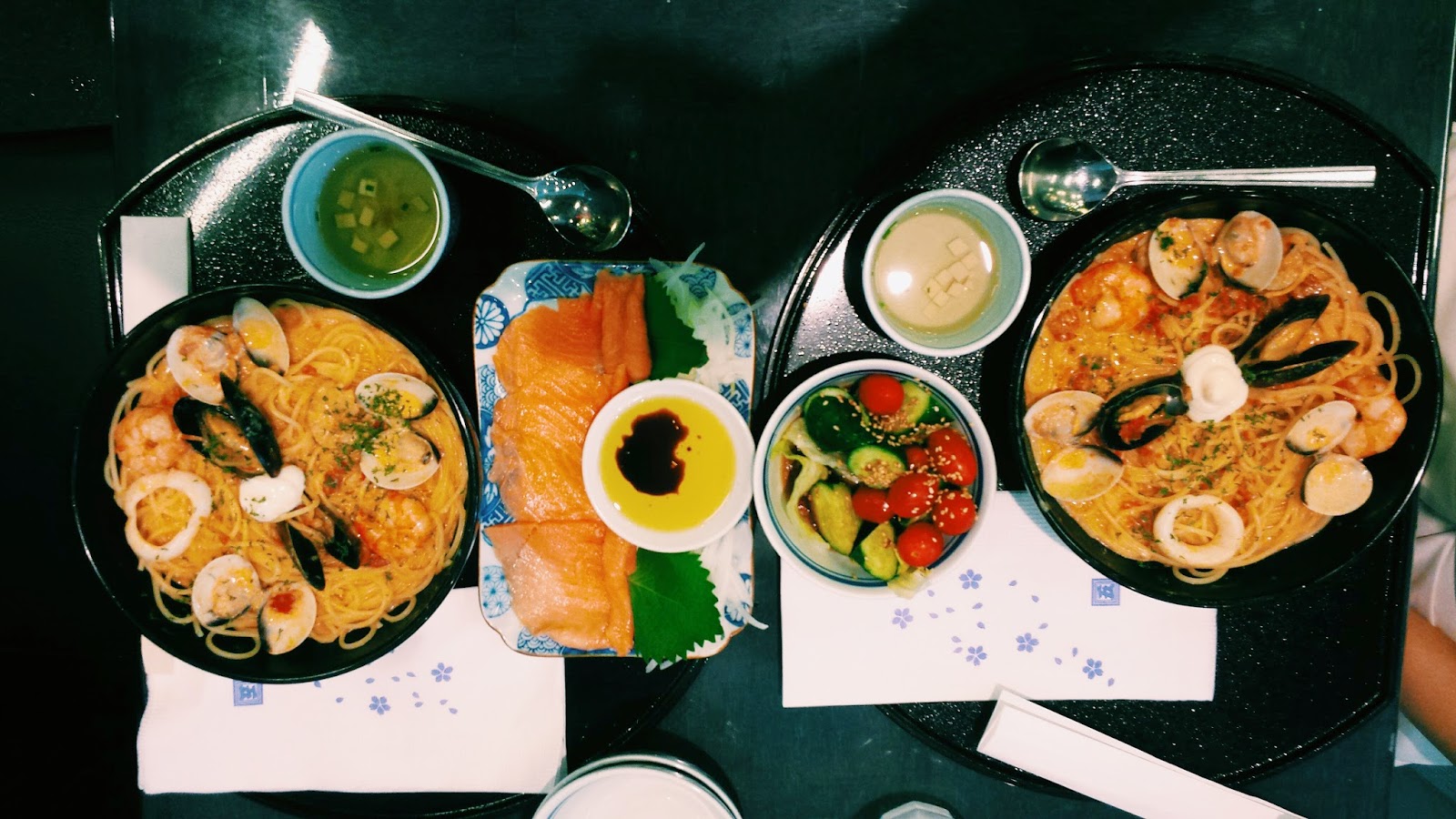 You guys see the bowl of salad right there? The bowl with like cucumbers and cherry tomatoes?

Ashlyn called me to help her get the salad. Yes, the salad is self-service. They called us to ‘do help yourself at the salad bar’. So, I literally helped myself at the salad bar, I mean, you don’t say. I grabbed some lettuces, some cucumbers and some cherry tomatoes (since she wanted them) but I wasn’t sure what dressing to put. They provided us with French Dressing, Sesame dressing, Wagyu Dressing and the other one which I can’t remember at all. The wagyu sauce looks pretty much like BBQ sauce so I took two scoops and pour it down the bowl of fibre-rich food. Then, I scattered some sesame on top.

My creation seems pretty legit at first, visualising it as some salad done by some Michelin-rated chef… Until when Ashlyn started trying to mix everything together. It looked like a pot of plants partially submerged in water after days of downpour.

I added too much dressing, making things rather salty. Oops.

I shall not continue to shame myself further. 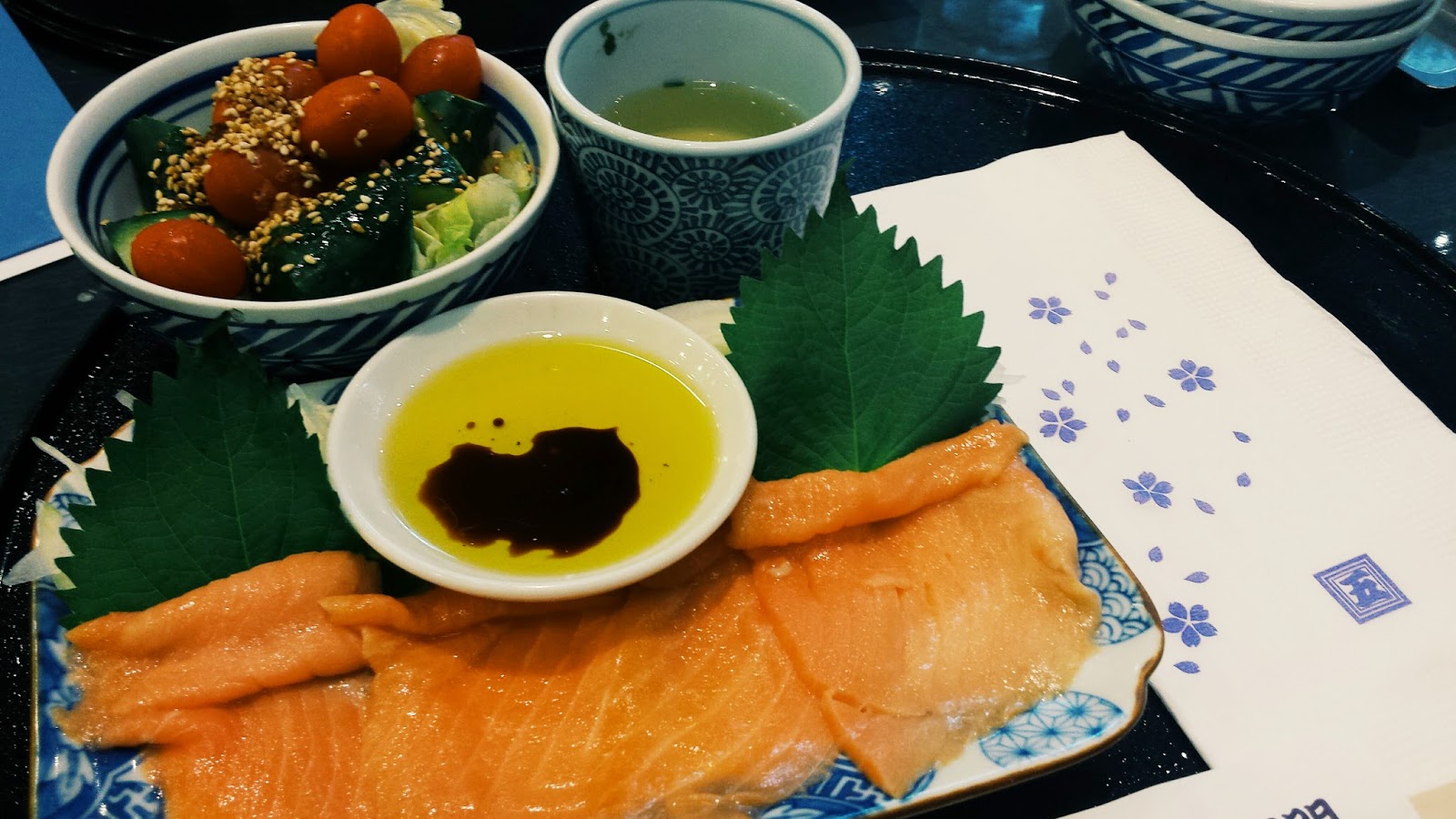 Did I not mention that we ordered another dish apart from our main course?

We were trying to decide between Calamari Fritto and Carpaccio with Smoked Salmon. But by looking at the picture above, you should know what’s our final verdict. The smoked salmon tasted pretty much alright, but I didn’t eat too many different kinds of salmon to comment on it any further. But it was good food. 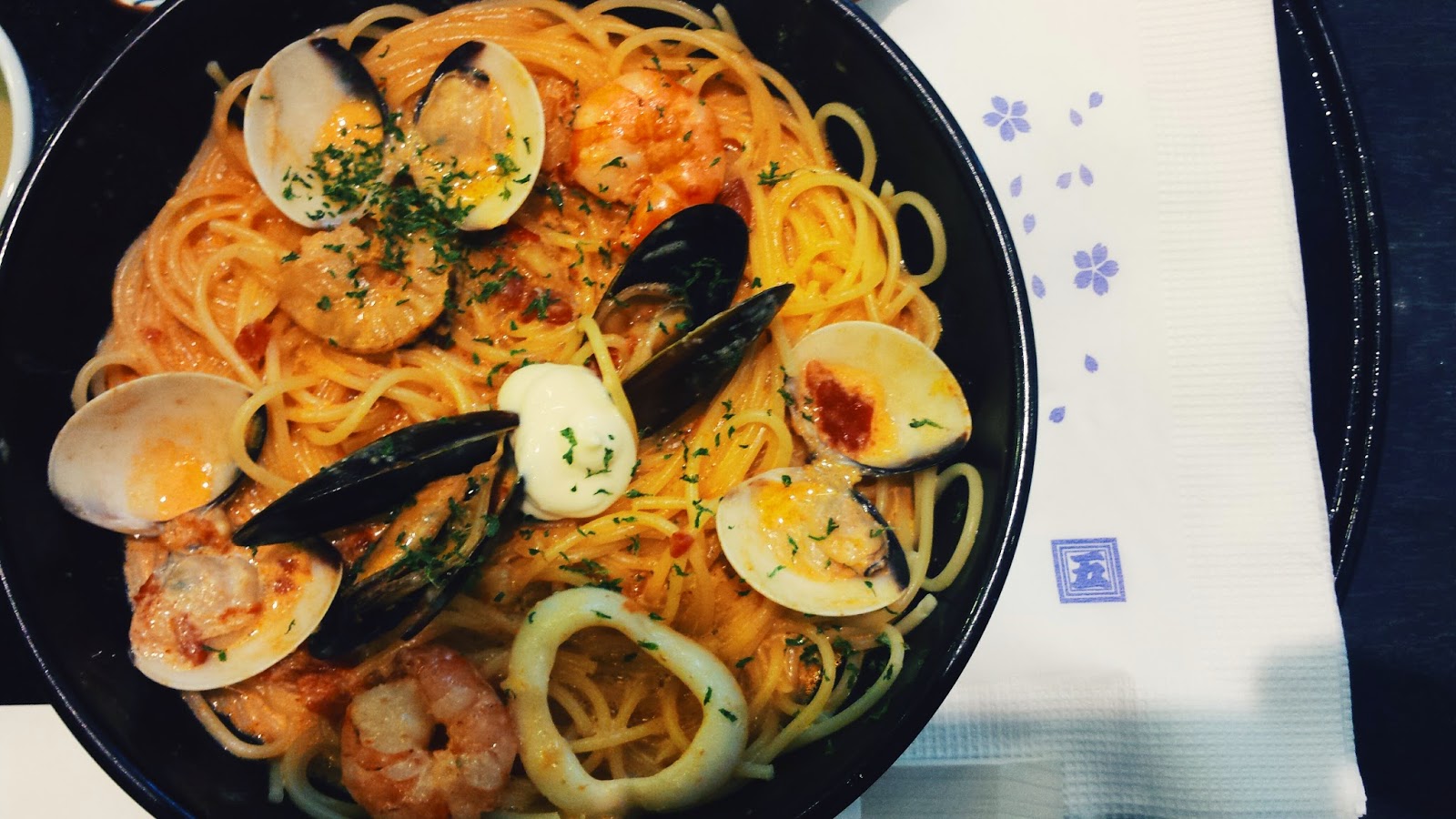 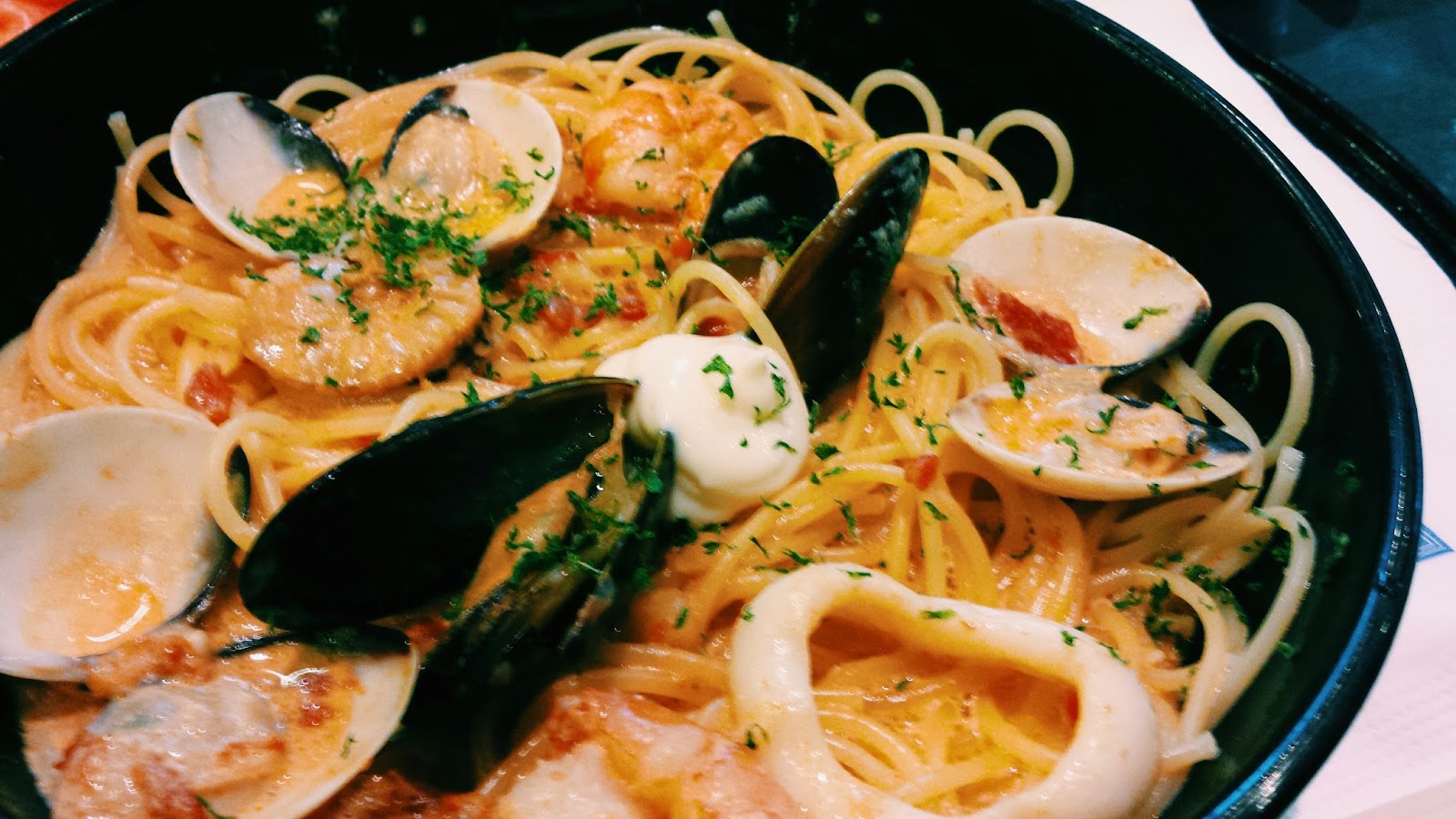 Here’s our Mediterranean Tomato Cream Soup Spaghetti with Fresh Seafood. As quoted from Ashlyn, that’s really a large serving. As a first timer in eating soup spaghetti, I fell in love with it. The tomato cream is marvelous, the aroma stayed for a while in my mouth even when I’ve swallowed the noodle and soup. Though it’s creamy, it doesn’t really taste that oily compared to those I’ve tried elsewhere. The seafood given is quite a serving, given the expectation of a restaurant.

I need to admit I thought I was having laksa towards the end.

That’s not the end yet. Ashlyn suggested we have some dessert before she starts shopping around for a pair of new shoes, new pink shoes. 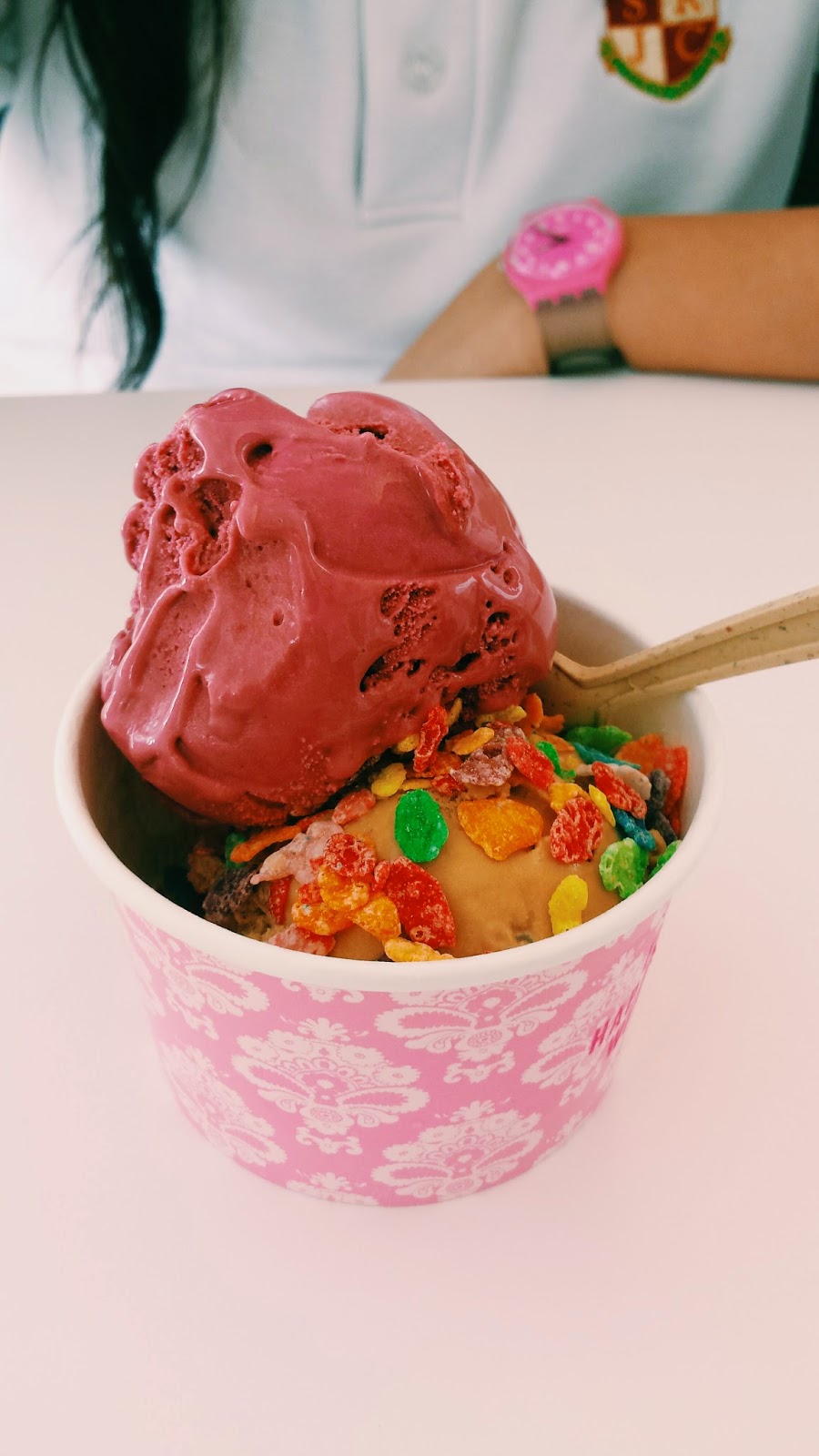 Oh boy, that place looks really atas (high class). Okay, not so posh like some cafes but it looks hmm… it has that kind of European countryside feel. To me, at least.

We ordered two different flavours: Red Velvet and Macchiatto, together with a free topping (which I can’t remember the name of it, but you can see the colourful things sprinkled on the ice-cream in the picture above).

I swear they have so many flavour offered that they even have some really funny ones. Like er… birthday cake? I don’t know. I don’t know how’s that going to taste like. Ashlyn and I were both left wondering about what taste that flavour actually gives when it’s on our tongue.

That’s a mystery I am going to solve the next time I visit Marble Slab Creamery. 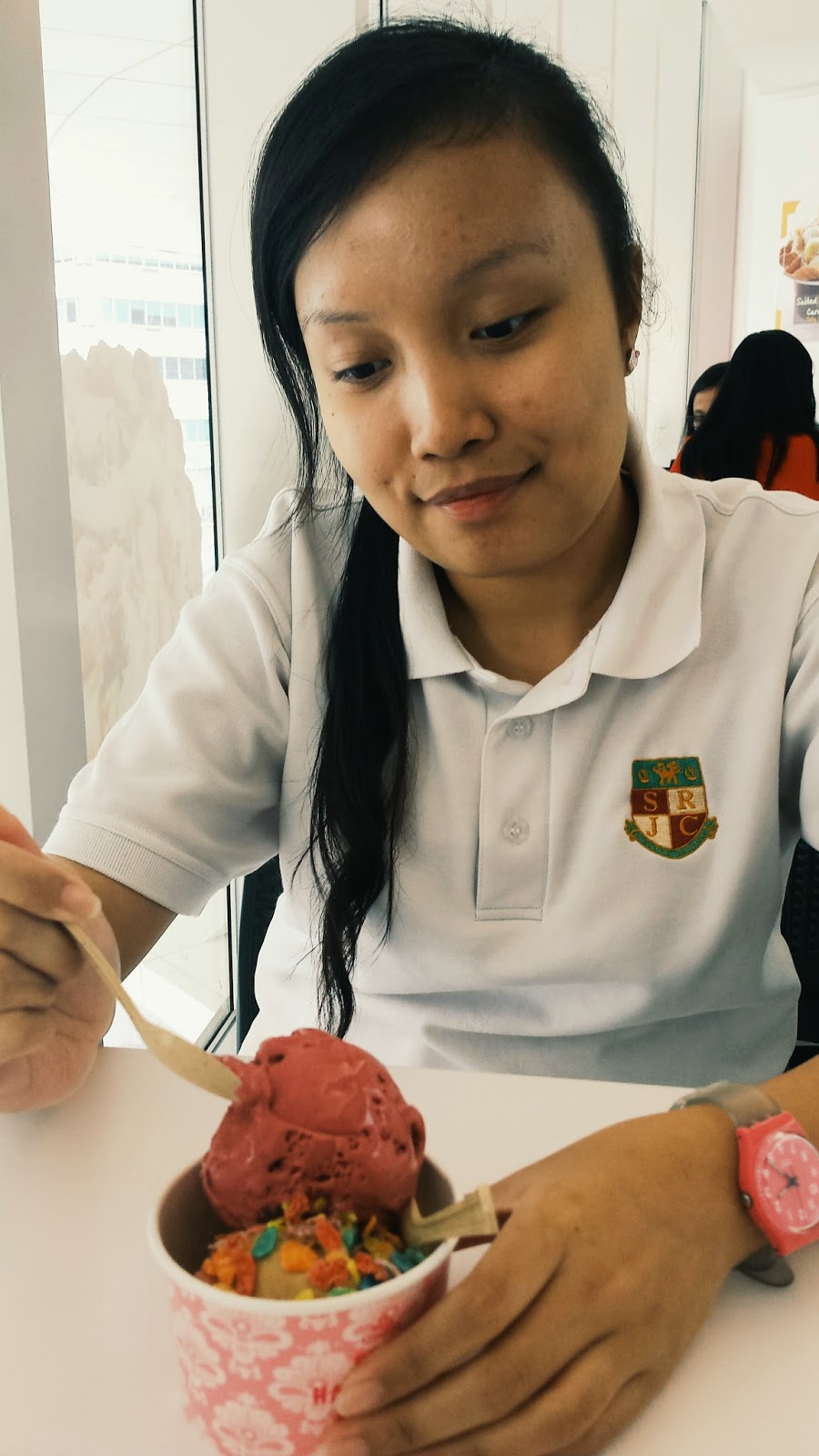 Here’s a picture of Ashlyn enjoying her ice-cream as a closure to this post.
I would like to wish Ashlyn 姐 all the best for her A’ Level and we shall meet again after that! More Japanese food maybe!!!!