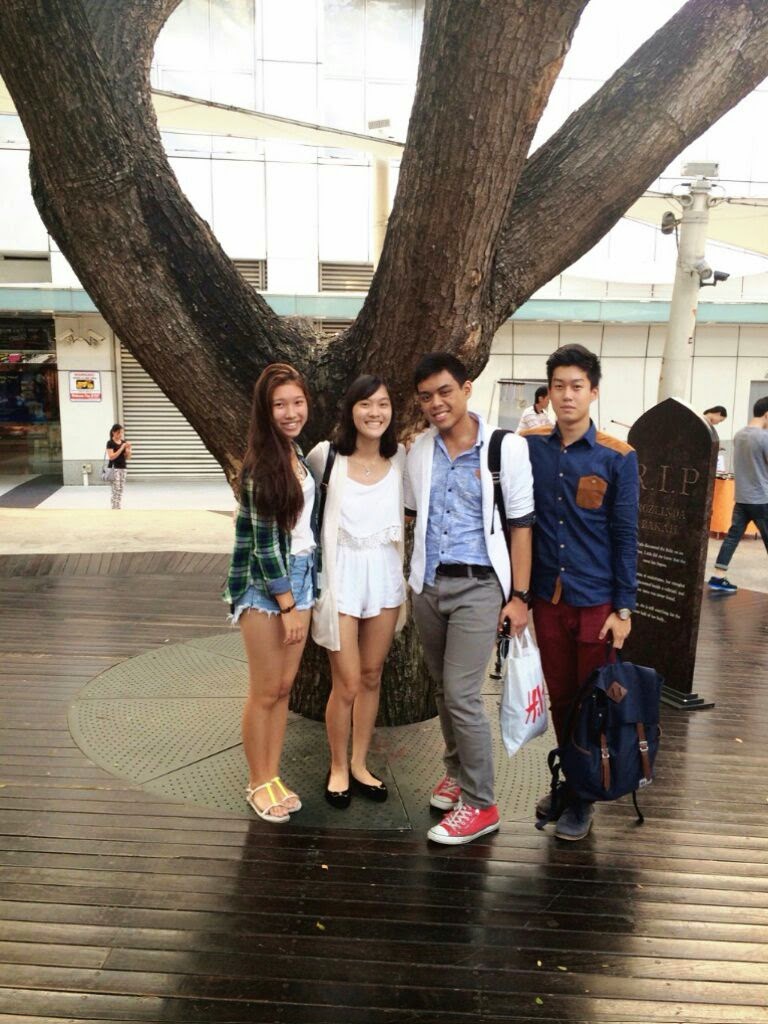 I was supposed to meet them at 2.45PM. I ended up leaving my house late and arriving slightly later. At least, I was not THAT late, I guess. I reached at quite a few minutes after 3PM and they were just about to finish their payments at the counter of Kbox in Cineleisure.

I think I’ve been singing too much this birthday.

But I am glad I was able to do what I love most on this special occasion.

I am truly thankful for Dallies, Crystal and Zeliang to specially celebrate this wonderful day with me, at Kbox! And guess what they got me? A sweater from one of my favourite clothing retail store, H&M! I heard they had chosen quite long of the suitable clothing for me because they are in doubt of what I like. But hey! Don’t be afraid of choosing presents for me because I treasure and love everything people give it to me!

That’s a reason why I don’t request for any specific presents because it’s all down to the heart and no one in this world actually owes you anything.

The sweater was indeed sexy.

By sexy, it means that it looks fashionable enough (Well, you’ve always have to trust their taste) when I wore it to lesson the following day. It fits me just nice and makes me looked like a professor.

Kbox was fun for a start until the touch screen thing decided to hand on us and the staff had to restart the thing and Dallies was like complaining about the time wasted (oops). Of course, the problem was solved within a few moments and we began singing like it’s our concert.

I still feel bad to hog the mic for most of the time. SORRY!!!

And this Crystal, fulfilling her promise by singing the song 煎熬 by 李佳薇 (Li Jiawei, definitely not the ex-national table tennis player) IN THE ORIGINAL KEY. Which is still giving goosebumps till today whenever I thought about it (And that’s actually a good thing though). In contrast, Zeliang and I singing a duet together was a disaster in the making. Especially when we tried to sing the female’s part. It was gay. But I think we did not bad singing 泡沫 by 鄧紫棋 (G.E.M), despite us trying to sing at the top of our voices like we were drunkards. The girls gave us the ‘dafaq’ look.

2 hours of KTV was never enough but too bad, we had to go. Haha! We went to walk around Cineleisure before heading down to the *Scape next door. Which I was rather amused by the Halloween’s decoration there. I swear I would scare to death if it was at night. It was damn freaking real.

Anyway, we decided to take a photo there and managed to get two pretty ladies to help us take it. (The photo is above, in case you are wondering) I swear Zeliang looked like a robot in the picture. HAHAHAHA :’D

Before I end this post, I would like to use this chance to thank you guys again for going to KTV with me on my birthday. Thank you so much! Hope we will continue to build on to this friendship in the next 2.5 years in CMC and of course more years further down the road! I may be an asshole or even fierce to some of yall or even being very direct but remember, that’s because I treasure this friendship! HAHAHA. Okay! I will definitely wear the sweater more often, and hopefully with a white-based shirt. HEHE! LOVE YALL!