It’s near towards the end of the month and I am sure many people are facing the same issue. The issue regarding the amount of money in your wallet or your bank account right now. Many of you, like me too, has already somewhat spent away a good portion of your pay and/or allowance and now trying to make sure you have enough to last till the end of the month or until your paycheque has come in.

(Image: personalliberty)
The contrast between the start of the month and nearing to the end of the month is massive.

I could totally relate to that.

1. Have Meal With Someone Who Has A Relatively Small Appetite 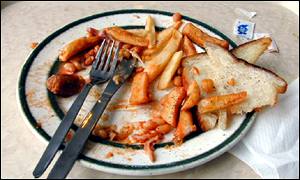 That works absolutely well for me, especially during the past few weeks. I haven’t been spending a lot on food thanks to the kind of friends I’ve been eating with. Slowly you will realise that some of your friends (not necessarily those who are small in size because you don’t judge one’s appetite by merely looking at his/her size) don’t really eat much and that means there are always food for you to ‘cope’ from.

What I’ve personally tried was I went to the caifan stall to buy some rice and some meat for merely just $2 and when I returned back, everyone was complaining about not able to finish their food. Ohohoh, did I not mention to always be the last person to buy food because you’ll roughly gauge how much food you need to spend your money on – you see, if you see someone with a small appetite coming back to the seat with a huge portion of food, you know you can just go ahead to just get some staple food for yourself. Of course, the only problem is that: what if that person is really hungry that day.

Here you go, for a second round of food.

Well, actually, there’s another way if you want to save money from food. That is, to drink more water. Water can help to make you feel full and for those of you who are trying to prevent yourselves from gaining some pounds, drinking water is definitely the way to go! No calories yet you still feel full!

We are very fortunate to be here in Singapore where drinkable water is readily available everywhere, especially from the convenience of your own kitchen. Although water tariff for household is $1.17 per cubic meter below 40m3 and $1.40 per cubic meter above 40m3, if you do your math, you will realised that at the end of the month, you will save more when you choose drinking water instead of buying too many snacks or considering extra servings of food!

Well, if you aren’t the one paying the utility bills, extra savings for you when you replace your snacks with water! 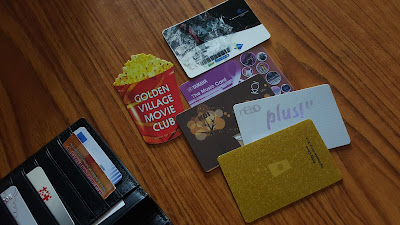 You’ll never know how much you could save with all these customer reward cards, be it absolutely free or something you’ve got to invest on. I’ve personally signed up for Golden Village Movie Club card (something that I truly recommend if you are avid movie goers). It entitles you to a “GV Members’ Tuesday” privilege where you can catch a movie at just $6.50 instead of the usual $8.50. Hey, that’s $2 discount. You can save this $2 on other stuffs!

While some of these reward systems are card-based, there are many that are card-less and they are everywhere. For instant, you can sign up for CapitaStar and remember to always scan your receipts at the CapitaStar machine located within any CapitaLand Malls and you will soon gathered enough points to redeem vouchers that you can enjoy during the last few days of them month when you are nearly out of cash.

The moment when your friends jio-ed you for voluntering work or when someone approached you to voluntarily help them in something, go for it, especially when you are trying to save money.

Look, volunteering is free and you didn’t need to pay for anything. And during volunteering, especially when it takes up your late morning till night, there will be chances that lunch and dinner will be provided. That’s when you are already spending $0 on food for that day. And guess what the other perks are? You get to earn CCA points (for students) and you’ll get to expand your social circle. And the biggest perks of them all? You’ll get a sense of accomplishment because you’ve done something in return to the society.

5. Make use of all the discounts during special seasons, like Black Friday and Cyber Monday!

Thanksgiving has just passed and we are now entering Black Friday and Cyber Monday weekend, that means you are so going to look out for all the offers across the country and online. During these days, most of the shops are going to have massive discount since it marks the start of the Christmas present shopping season. Online sites like Zalora are having up to 80% off and some even offer further discounts if you were to download their app.

I am so going to check out the other discounts right now to see how I am going to utilise the remaining money in my bank before money comes in next week when the new month arrives.

Just hope you guys will not be like the Americans when you are rushing for the deals!

Last Saturday, I headed down to the Home Team Festival 2015 held in the Singapore Expo with Adam, Huiqi, Jonathan and Rebecca
Coincidentally, as we’ve planned this earlier that week, it was a day right after the Paris Attack.
I take it as a chance for me to reflect upon how we should learn to stay vigilant despite the time of peace in Singapore and at the same time, appreciate the Home Team for their effort in keeping the nation safe.
As we walked into the exhibition hall, the crowd volume had definitely overwhelmed us. There was so many people coming down for the exhibition, and many of them came as a family.
There are many displays put up by the organisers, from passports (under the Immigration & Checkpoint Authority, ICA) to rescue vehicles (under the Singapore Civil Defence Force, SCDF) to law enforcement vehicles and skills (under the Singapore Police Force, SPF and Central Narcotics Bureau, CNB).
What that actually interest me was the “Crime Scene Investigation Room”.
It allowed participants to “cross over the line to the crime scene and find out what it’s like to be part of the forensic investigation team”.
That kind of reminded how I once dreamt of becoming a forensic investigator after becoming a fan of a TVB drama series, the Forensic Heroes series.
I even actually turned to Jonathan and said, “我是西九龍重案組高級督察馬國英。。。你可以保持沈默，但你所說的每一句話將成為呈堂證供。” (I am Ma Kwok-Ying, the Inspector of Police of the West Kowloon CID… You may remain silent, however, anything you say or do can and will be used against you in the Court of Law.) Well, for those who didn’t watch Forensic Heroes II, Ma Kwok-Ying is the character played by Hong Kong actress Charmaine Sheh. And somehow this line stuck in my head for the past 5 years…
Just as the group of us walked into the room, we were greeted by a rather messy crime scene… 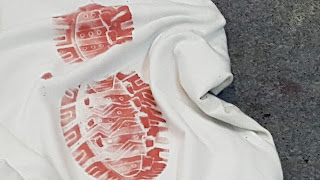 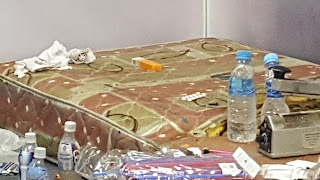 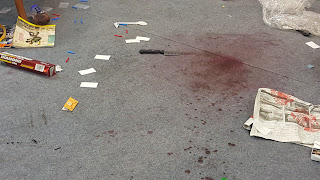 I felt I was relieving my dream.
Well, it was once my dream until I realised how bad I am in the Sciences and eventually went on to pursue Arts in the end… (I regard media studies as a form of Arts subject though).
We were supposed to “gather” evidence and information by taking photographs before heading to the next room to share our findings with the officers.
There were 4 booths in the next room:
One by the SCDF — teaching us on how to identify whether a fire is accidental or incendiary.
The second by the ICA — teaching us how to identify fake notes and passports, with the help of florescent lamp and UV lights.
The third by the CNB — teaching us how they identify controlled drugs during an operation using technology, such as iPhone app.
The fourth by the SPF Crime Investigation Department — teaching us how they use iron filings to reveal finger prints.
It was definitely new knowledge acquired through the explanation by the officers in-charge.
Here are some of the photos I’ve taken as we continued the exhibition after leaving the “Investigation Room”.

After this trip, I am more appreciative of the works done by the Home Team. They are the reasons why we are able to work and travel peacefully without having fears of crime. Although low crime doesn’t mean no crime, it is a collective effort of both the Home Team and the general public like us to ensure low crime rate.

Let us stay vigilant together as one people, one nation, one Singapore.