Scrolling through my Instagram and Facebook feed for the past one week, I realised one very harsh fact: Most of my friends and acquaintances from my Secondary School – or to be exact – people of my same age have just donned their graduation gown and were handed their graduation certificate.

And here is me, staring at my laptop screen while reflecting on my 4 years of tertiary education – one year more than most Singaporean teenagers. I am presuming anyone who is reading this right now knows my story – how my one and only year in the Junior College education system ended up in tragedy. I left what I felt didn’t suit me – it’s like trying to mix diet coke with mentos. I enrolled into my current course two years back in 2014, very confident and sanguine that my interest in Chinese-language film making will bring me the success that I’ve being deprived of since being able to squeeze into Top 10 in class in 2011.

I think it’s important to do some reflection about yourself at a certain part of your specific journey. Looking at my ex-peers posting their graduation photos one after another over at Instagram, I think it’s finally a perfect time for me to reflect upon my life decision so late into my teens.

Many people had inquired if I regretted my decision being enrolled into JC then dropped out and to choose my alternative with my current course of study. It was an assertive ‘No’ for me. I did not regret because of the people I’ve acquainted there in Serangoon JC. Friendships were made and lasted even till today. I could still recalled how much I dreaded school before the first day of orientation. I was grumbling to my mother that how I wished my Secondary School friends were there with me. How am I going to survive without those people whom I used to meet almost everyday and create trouble with – of course, the friendships I’ve forged in Secondary School are irreplaceable. From Junwei to Weihao – the guys who were remained in the same class as I from Secondary 1 to 4; from Yichen to Hong Kiat – the brothers to the extend that we’ve even taken an oath together; from Elyssa to Yong Kang – the group of friends who love politics as much as I do and probably the only few that I am open to discuss politics and world issues with; from Audrey to Tan Ting – my Drama Club juniors who made me feel that Drama Club is indeed a family. Of course, there are still many more people whom I didn’t mention. I love my 4 years in the school, serving the school with my blood and sweat and probably the only school that I am willing to do so. From running for Student Council elections to working with my seniors on school events to being appointed an ExCo member myself and to lead my juniors. I’ve never felt so enriched, not even till now – an augment to my schooling experience.

To be very honest, I missed my past self. So spry yet tireless. I could balance school activities, leadership, academics and tuition simultaneously. While trying not to be a narcissist, but I had to marvel at my abilities back then, the abilities that seems to have worn out from my DNA within the past 3 years.

My first month in the new learning environment was marked with uncertainty and confusion. I have no idea of what is going on for the majority of the time. I didn’t really make friends during the initial stage because I am still in denial of the fact that I had to learn to accept transition. Wan Qing and Elyssa were my pillar of support back then, because at least there were the only two I really know at the time – they were my classmates and friends back in Secondary School. Even though I was the CG Representative (something like class representative), against my will anyway, I failed to communicate well with the rest of the class. I felt there was a wall that segregated me from the rest. A psychological and mental wall. As I slowly opened myself as time goes by, succumbing to the fact that living in denial is never the way. I knew at that moment in time that I have to start making friends.

I sticked to a group of girls from my class who were always hanging out together during breaks and lunch time. From Wanz to Mich, I slowly become a part of them even though there was a radical contrast in our appearance – I was the only guy. The academic effects start kicking in. Homework and tests are slowly becoming parts and parcel of our life. While everyone struggled during the initial stage, I was struggling both mentally and physically. I refused to believe that I am failing my tests, whether it be Economics or General Paper. Gradually, I withdrew from the original clique and went into isolation.

I am someone who adore nothing but my own personal pride. I am someone who believed in myself and hence setting high expectation for myself. When I see that my results were at all time low, it crushed me completely. Scoring 9 rank points for my mid-years was akin to a professional side getting trashed 11-0 by an amateur side. There was no where I could hide my embarrassment.

However, to think about it now, the combination of constant denial, lack of goals, pride and ‘homesick’ might have constituted my ‘downfall’. Pride was that I refused help, I refused consultation, I refused tuition classes. I thought I could have cope with the enormous workload that was going to come right towards me. But there includes a little uncertainty. I was not that sanguine by then. Aghast by my academic performance, I lost all interest. I’ve lost my fighting spirit I once possessed. I believed strongly that even tuition couldn’t have help me and I might be wasting time and money into this investment with no return.

I hide into The Study – a designated study area with freezing air-conditional system in the campus. I stayed there every break, sitting there trying to understand every single Economics terms and theory. I sat there alone, realising that it has been a mistake. I’ve made a mistake choosing the path.

I could be wearing my graduation gown this year if I’ve chose Poly education right from the beginning.

*You may take this post as a mini-autobiography of myself, but I think I just need to do some reflection and recollection of my thoughts as I embark on my final year in my current course of study. I am just using my blog as a medium to put that voice in my head into words. If you are interested, read it. If not, I am okay with it. I just am not sure how many parts there will be to this reflection.

You must be thinking why the title to this post is written in Spanish.

When translated to English, it means “Mexican food for the First Time”. (Well, if I got it wrong, blame it on Google Translate) 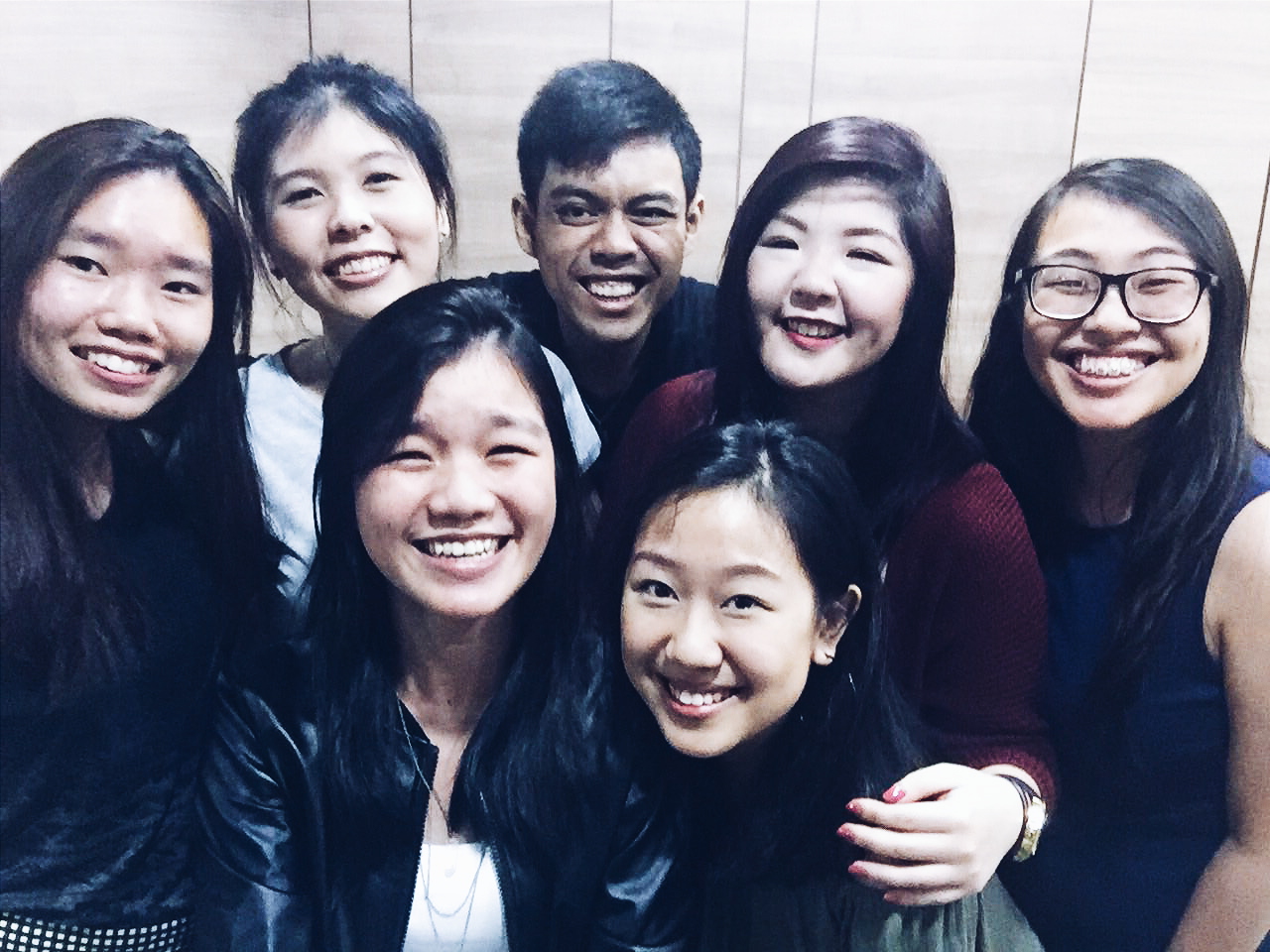 It was Michelle’s birthday on the 2nd of May. After KTV with Peish, Charmz and Yapz, Mich, Yapz and I travelled down to Clarke Quay to meet the rest (Viv, Clar, Nic and Wanz) at this Mexican bar called “Señor Taco”.

We took the menu, and I stared at it and was at a perplex state of mind almost instantly.

There was hardly a dish that I recognised. Because, since this was the first time that I was inside a Mexican restaurant. I felt out of place – being introduced to a culture that is so stranger to me. Hence, like what I always do, I left the decision making process for the rest to worry about.

I just sat there and stare at the rest of the girls.

Well, I love to do the easy stuff.

It didn’t take long before the food were being served. 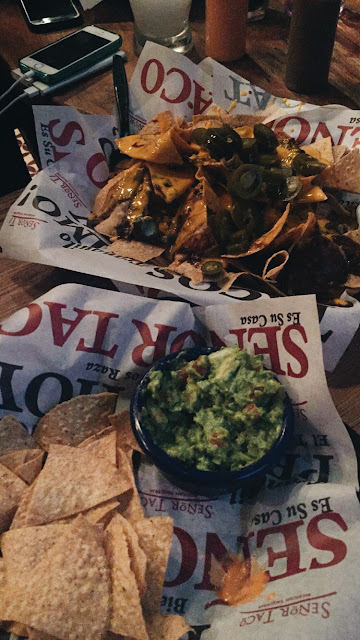 Apparently, one should never trust the photo above. We ordered more than these nachos. We’ve even got some tacos, some chicken wings and etc. (Look, I can’t even remember what we got in the end. All I could remember is that the food filled up any available capacity of the two round tables that we were occupying.
We ate, talk and watching people doing some sort of line dancing.
I left a random statement, “Guys, I felt like I am in a club. Community Club.”
After eating, we wanted to take some photos together and with our birthday girl. We tried to take along the river side but realised that the quality of the photo is rather pathetic. Nic suggested that we should take them inside Central – the shopping mall nearby.

That’s it for now! Not sure when I will post my next blog post again because you know, semester is starting and I am on the verge of dying – I know it rhymes. Okay I won’t die because there are people like these girls who will always make me realised how blessed I am. Geez.