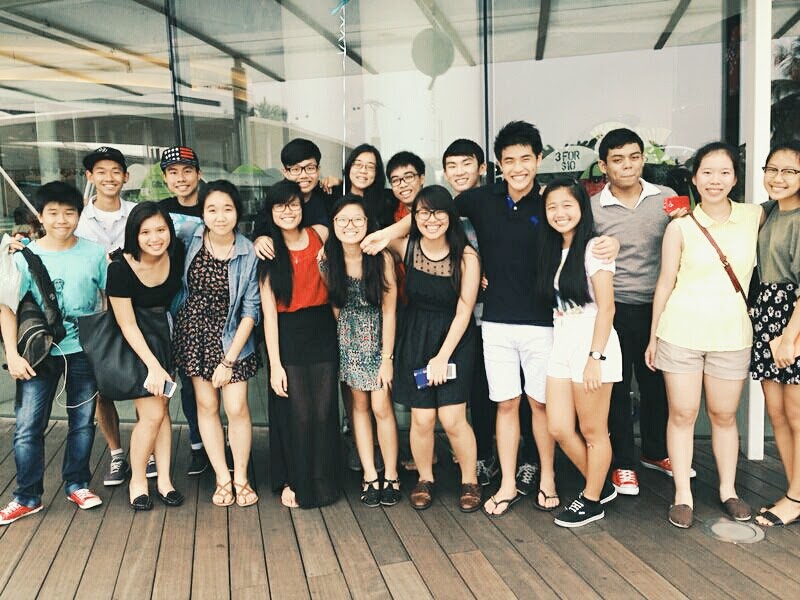 Our Miss Leow has turn eighteen yesterday. And look at the amount of people coming down to celebrate her birthday on that special occasion. Vivian wasn’t in this picture and I didn’t get to see her although she was with Ash this morning at her house. Maybe she got something on. And we don’t see Adrian in this picture because he got something on earlier and came only later during the lunch.

ASH IS THE POP KID IN TOWN!!! haha

Buying the present the day earlier (as mentioned briefly on my previous blog) was quite funny because I was going around from Bugis to nex. Okay, not quite funny. But quite interesting. After buying my pop filter at Sim Lim Square, I went down to OG Albert Park to take a look. And while liaising with Elyssa on what to get for Ashley as her birthday present. And I saw this… 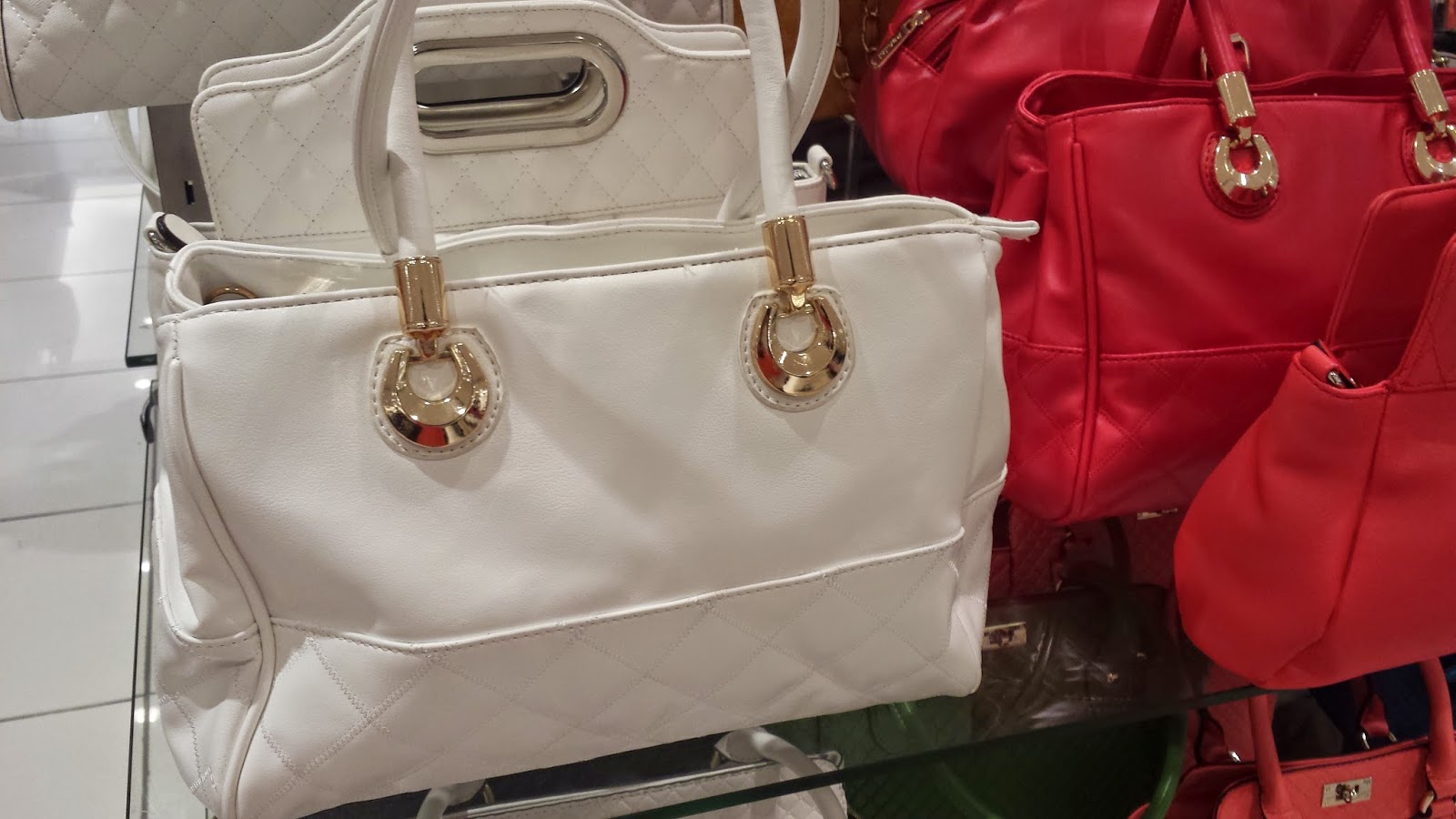 For S$49.90 and it looks kind of legit. But then since Yap Qi they all got here a bag, we decided to get something else. I continue to look around OG for fun. Then I saw some man wallets that looks nice. Although I need to change my wallet because it is torn, but the price of the wallet is too over the top for me. S$80 – S$110 for a wallet. I think I will be spending all my cash on a wallet that will cause me to have no money left to put in the wallet.

I left OG for nex.

And I walked around the area for some gift ideas. And eventually, I decided to get some kind of very nice mug for Ash.

The next day, I went for the birthday celebration later than the rest of them because I’ve got to help out at my parents’ shop in the morning. And yeap, I missed the fun part where they get to see Ashley do all the funny pranks. Well. Luckily Yap Qi videoed the process and put it onto the Whatsapp group.

I was in time for the group photo (which you see at the top of this post). 🙂

And then, it’s lunch.

And we took quite a long time to decide what and where to eat at VivoCity because the entire VivoCity was damn freaking crowded. I don’t know why, but it seems that the entire Singapore suddenly filled with human beings. The MRT train was freaking full despite it was only 12 noon. The shopping mall was darn freaking full. I must admit it might due to the effect of the public holiday, the first public holiday Singaporeans and any foreigners working here get to enjoy ever since Chinese New Year about, let me see, 2 months or so ago. I think everyone was so stress because of the lack of holiday here that everyone decided to go crazy and come out from their shell like some flocks of birds during the winter season.

But eventually the 13 of us who stayed for lunch managed to find seatings at some KimGary restaurant.

Yes. 13 of us. Imagine how people are judging us on the kind of noise we’ve made in the restaurant. 13 people chatting their way throughout as if we owned the whole place. Ok. Maybe I exaggerated much. We didn’t cause that much amount of chaos like how the pro-Russians did in the entire Ukraine.

Sat near Kheng Yin and Elyssa. And why am I mention their names? Because I still kind of find it funny that they ordered ‘instant noodles’ in the restaurant. The moment they wanted to order something that look exactly like something that I could have cooked within 10minutes back at my home, I was like:

Sorry Elyssa if you are seeing this. I promised you not to type that out but I can’t help it. It is really kind of hilarious. Not saying such action is not allowed but erm… Not sure if it’s as worth? But it’s alright, the ingredients in fact makes the price looks more legitimate.

Since Kheng Yin was like wanting to have some fries so I decided that we share it among the three of us and probably the rest who wanted it.

The fries, as according to them, were really good. 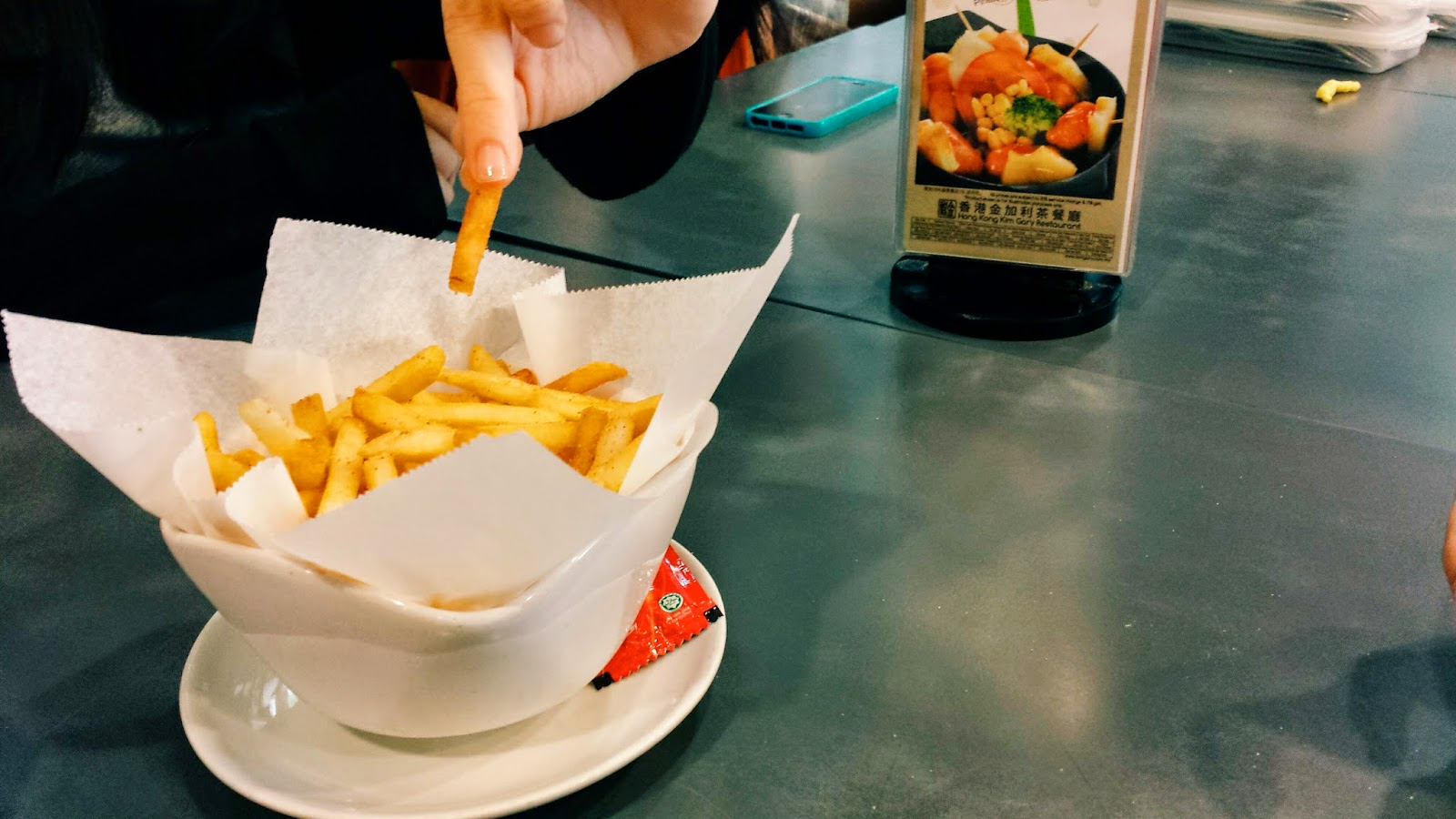 The plate of fries, featuring Kheng Yin’s finger.
And then the food came.
And then I ate.
And then I realised that I’ve forgotten to take a picture of it. I mean foodporn. So I quickly grabbed my phone and took two snapshots of my food before I carried on eating. 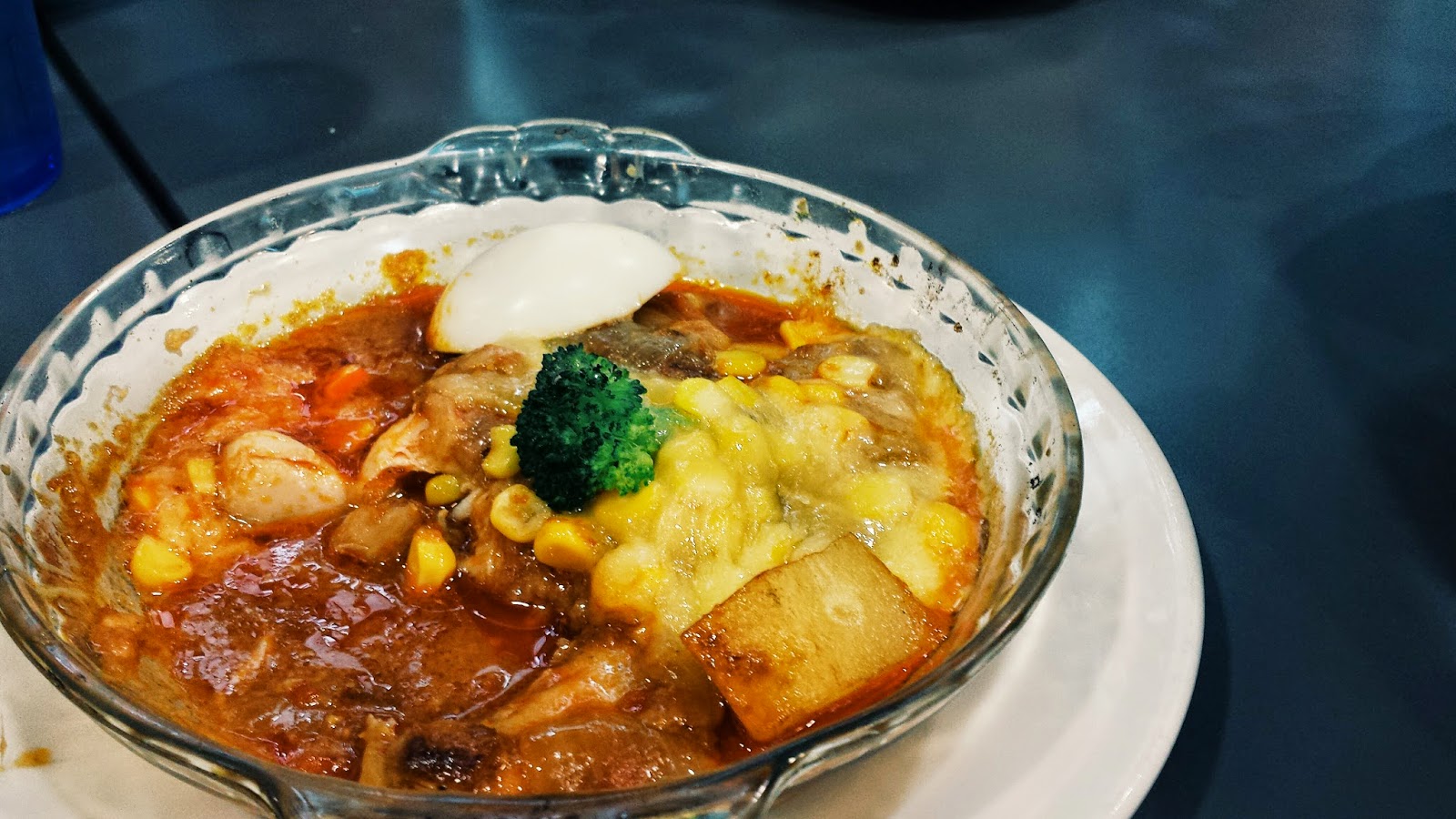 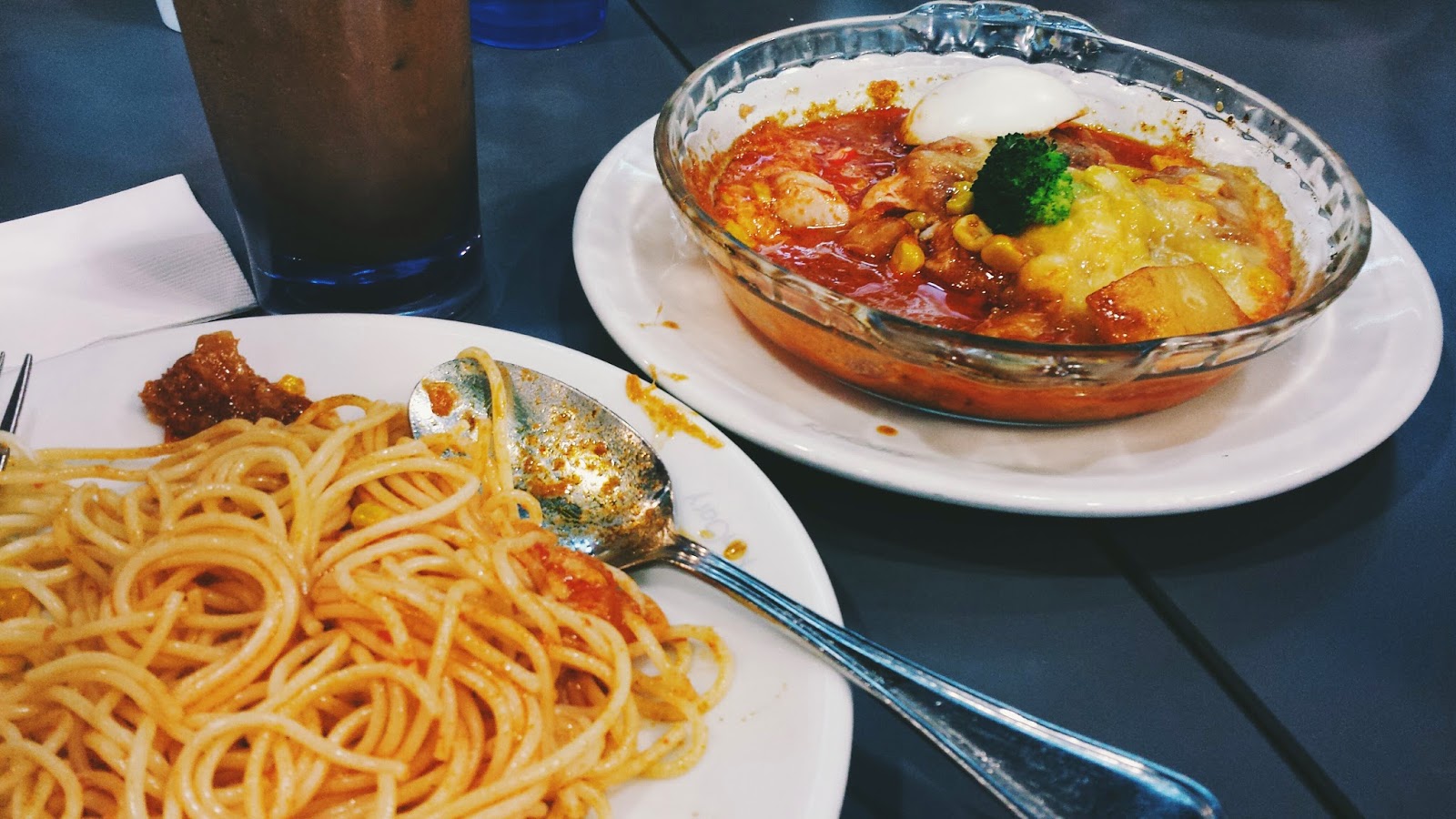 Looks kind of delicious uh. And guess the irony? Eating some kind of south asian food in an East Asian restaurant. I am kind of hilarious too. But luckily, I had a cup of YuenYang to make everything seems more legit. (But it might also look like some teh tarik)
Before I end this post, how about an ootd? 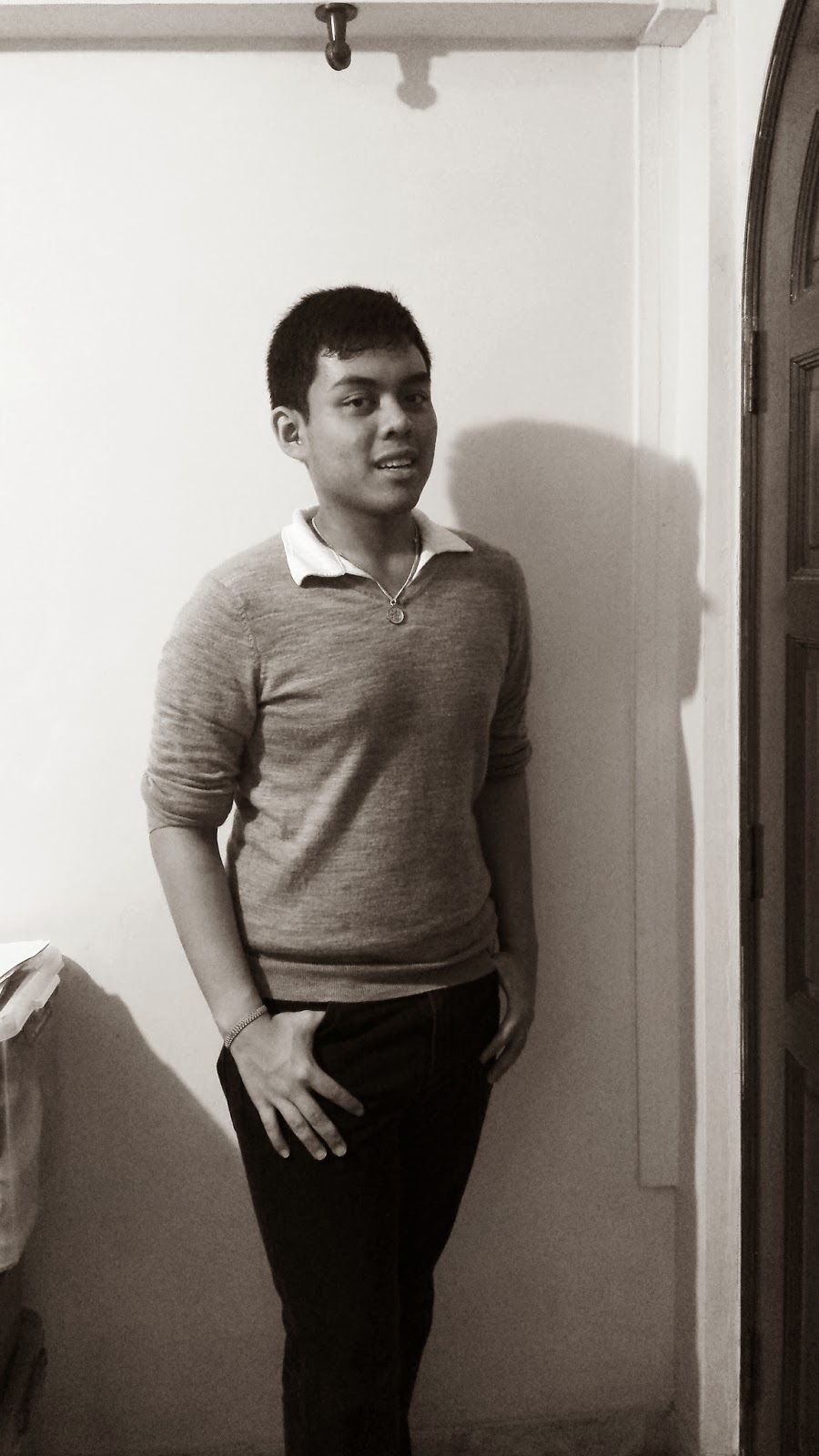