21 English Words That You Might Have Been Pronouncing Wrongly 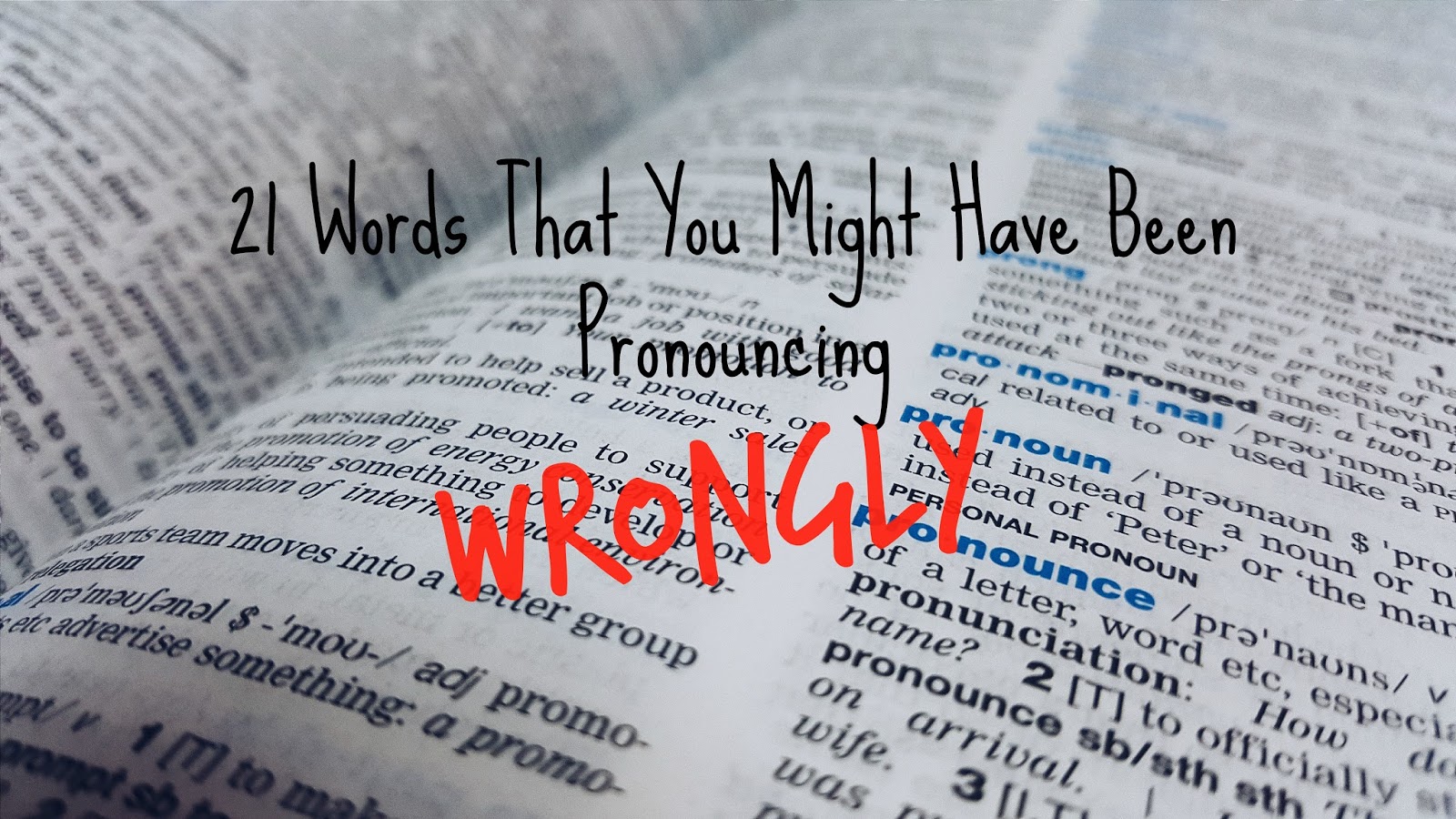 So here’s a list of 21 words that most people, including myself, have been pronouncing wrongly since the day we started speaking.

1. PRONOUNCE/PRONUNCIATION
Since we are talking about pronunciation here, let’s get the keyword right from the first place. While the word ‘pronounce’ is pronounced as ‘pro-nounce’ (that’s really direct, doesn’t it?), the word ‘pronunciation’ tend to cause some confusion. The noun form of ‘pronounce’ is spelt differently (notice that they dropped the ‘o’?). Hence, it read it as ‘pro-nun-ci-a-tion’. Read it as how it is spelt.

2. ETC. / ET CETERA
Many people in Singapore, as much as I am hearing, mispronounce the longer formed of ‘etc.’ as es-se-tra. Of course, it should have been et cetera. Apparently, we are too lazy to read out the 4 syllabus word that we shortened it to just three.

A parliament is probably the most boring productive place in the nation where parliamentarians from different political parties come together to engage in serious political mudslinging debates over national issues. The English language is kind of confusing when it comes to this, while we tend to decrease the syllables in words like ‘et cetera’, there are times that we get too conscious over our pronunciation that we actually very single syllabus that we think the word contains.

The word ‘Parliament’ is often read as ‘par-li-a-ment’. But, well, it should be read as ‘par-li-ment’. Probably whoever who derived the word realised that they doesn’t really deserves the ‘A’. Just kidding.

Something that we use as much as we get it pronounced wrongly. “Hey, do you have a comb? I need to comb my hair.” Many of us, including myself and the Americans, tend to pronounce words like this literally. We mispronounced it as ‘com-b’ – as in the ‘comb’ from the word ‘combination’. (Of course, it’s considered a correct alternative pronunciation if you are coming from somewhere where American English is preferred.) The actual and of course the British way of pronouncing ‘comb’ is ‘keum’ as in ‘womb’.

I swear English itself is confusing enough, and we really need not British English and American English to further complicate things.

“Could you help us take a picture?”

Often, we pronounce it as ‘peek-ture’. Not sure what you are peeking at while taking a picture, but the actual pronunciation is in fact ‘pik-cher’. Don’t drag the ‘i’, just make it short and simple, just like you just press your shutter once to take a picture.

6. PHOTOGRAPHY
Another word that has always been mispronounced by almost everyone. The ‘photo-‘ in the word ‘photography’ doesn’t sound the same as the word ‘photo’ when it is left alone. It’s not ‘pho-to-gra-phy’ but instead it’s ‘fhe-tog-ra-phy’.

Told you English is confusing.

No, it’s definitely not pronounced as ‘suit’. Repeat it after me, “sweet’. Yes, they rhyme. Well, apparently they think that being in a suite is the most sweetest feeling ever. Must be.

8. ACCESSORY
Those things that we put on our necks or wrists for decorative proposes? Yup, that’s accessories. As much as we love wearing them, I mean er… most of us would love to have some accessories worn together with your outfit of the day, we tend to shout out the wrong pronunciation for this word.

“Dear, do you have the asses-so-ry?”
This pronunciation probably requires some assessment. It should be pronounced as ‘ac-cess-se-ry’. Well, I didn’t know I was pronouncing it wrongly when I realised that there’s no such word as ‘assessory’.


Before you start commenting on how your friend has an ‘athlete leg’, get familiarised with the pronunciation first before you get, er hmm, checkmate. We tend to read it as ‘at-the-lic’ which sounded right, but wrong. If we look closely enough, you’ll notice that there’s no ‘e’ after the letter ‘h’ in the word. It’s ‘athlete’ and not ‘atheletic’.

Not sure how and why we kept seeing it as ‘atheletic’. Pronounce it as ‘ath-lit’ and you are ready to go.

While there are actually two ways of pronouncing it, just like the word ‘comb’: the British way and the American way. That pretty much sums up how the Brits and the Americans are often at odds with one another. For countries who are using the British English, or I call it the more traditional version of English, the ‘l’ in the word ‘almond’ is silent.

Therefore, do pronounce it as ‘ar-mond’. Like how you say it after every prayer before your meals.

11. SWORD
I still remember how I was reprimand for pronouncing the word wrongly back in Primary School. As how it is being spelt, we tend to read it as ‘s-word’. But too bad, it shouldn’t be read that way. The ‘w’ in silent here, just like how the ‘l’ is silent in ‘almond’, as previously mentioned. Read it as ‘sord’, my fellow friends. At least your friend will probably get the correct weapon for you during a fight.

The most delicious thing to appear in this list. We all love pizza, don’t we? But we love pronouncing it wrongly too. We’ve been calling it ‘pis-sa’ but actually it’s ‘pitz-za’.

Forget it and just enjoy your pizza.

13. QUOTE
I don’t know why, but some people tend to pronounce it as ‘cote’. Just remember to pronounce the ‘u’ and you’ll be fine.

I know sometimes being an uniformed officer can be a shit job but there’s no need to say that you are a poo-lice. It is not poo-lice but per-lice.

Now let me make myself a cup of hot ‘co-co’ before continue on with the list.

What do you call when you need someone to fix your sewage system for you? The plumber. That’s right. Not the ‘plum-ber’ but the ‘plum-er’. God knows why the ‘b’ is silent, probably it went down the drain.

17. FEBRUARY
A word that we tend to forget that there’s actually 2 ‘R’s in the word. Most of us tend to read it as ‘Fe-bu-a-ry’. For this, don’t miss out on any of the letters, pronounce the ‘R’s. Hence, it should be read it as ‘Fe-bru-a-ry’. It’s okay if you are struggling with it, because me too. TEEHEE

18. WEDNESDAY
Many people look forward to this day because it’s an indication of mid-week and that means that you are halfway through your week and the weekend is coming in a couple of day’s time.

Wed-nes-day. That’s all how most of us read it as. But too bad, the Brits decided that since there’s only two more days to the weekend, they decided to read it as a two-syllable word instead of a three-syllable word. Therefore, it’s just ‘wenz-day’. They simply just combined ‘wednes’ into a syllabus. Well done, English.

19. CACHE
For all you computer geeks out there, this word will not be stranger to you. For those who don’t know what’s cache is all about, it’s a part of the computer memory where informations are stored temporarily.

You may not understand how it works, but you’ll most probably love its actual pronunciation. It’s not anything close to ‘ca-che’. You’ll have to read is as ‘kash’, yes, somewhat like ‘cash’. Now, isn’t it easier to get it into your mind because it sounded like something you need it most?

Maybe that’s why my cash is always stored temporarily in my wallet. It’s gone almost immediately.

20. CHAOS
For most Chinese, we tend to read this as how it looks like, simply ‘chaos’, because that’s how we read it in Chinese. As if English pronunciation doesn’t create much of a chaos (remember this word has to be spelt with an ‘s’), they decided to pronounce it as ‘kay-yors’.

Sometimes I wonder how linguist gets to get everything right.

I will probably live there if I wasn’t afraid of the cold was given a chance to. It’s a very beautiful place because there is basically little or no humans and human activities. There are more people pronouncing ‘Antarctica’ wrong than the among of people actually working there. We mis-pronounced it as ‘An-tar-ti-ca’. This is because we clearly don’t realised that ‘Antarctica’ is made up of ‘anti’ and ‘Arctica’, which when combined, means the opposite of the Arctic land.

Hence for that, ‘Antarctica’ should be pronounced as ‘Ant-arc-ti-ca’.

Although this might not be a legit English word but this is for those football fans who are amazed by the sudden rise of Leicester City. As much as the name of this Leicestershire-based club is being mentioned almost everywhere – from workplaces to the pubs – it seems like everyone has been pronouncing their name wrongly. I was guilty of the pronunciation too. The city where it is based in is not pronounced as ‘Lei-chester’ but ‘Leis-ter’ as in ‘Lester’. Probably your friend named Lester might suspect if his name was actually spelled as ‘Leicester’.