This morning, while I was scrolling through Facebook, I came across this blog post written by Wang Wenhui in her guest post for loveoutloud.asia. The post is titled as ‘7 Things Women Really Really Want In a Relationship‘. Well, she talked about this 5 Languages of Love, which I’d try before. Hehe, but in order to write this post, I decided to redo the quiz again.

For those who need an introduction on the 5 languages of love, what it basically is is that different people have different love languages, ranging from quality time, acts of service, words of affirmation, physical touch and receiving gifts. There are no surprises that some people have more than one love language (that is, scoring high scores in two love languages). 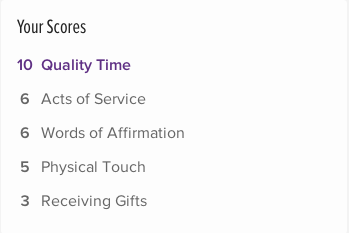 Here’s the score I’ve gotten. Seems like I am the kind of person who values quality time with my another half, although I myself have never been into any kind of intimate relationships before. Pretty cool though.
Anyway, let’s go back to the ‘7 Things Women Really Really Want In a Relationship’ post, the writer, posted, rather accurately what women expects of their other half. But then, women need to realise that we guys also have a set of expectations, what we truly want in a relationship. We’ve tried our best to digest what women really wants, but at the same time, I feel that in order for a relationship to work, the girls also need to understand what the guys want.
Here’s are the 7 things men truly want in a relationship:

1. Freedom
Stop being paranoid and over-attached at times. Not saying guys won’t do such things, but well, all of us really appreciate if we are given the right amount of freedom by our partners. Everyone loves just a bit of adequate amount of free space. By saying adequate amount of free space, I mean to stop whatsapping or call or whatever your boyfriend every now and then to check on what he’s doing. You know, it can get quite irritating it is being done too many times. Of course, good guys out there keep quiet to all these ‘torture’. But hey, you have to understand that he has his own freedom, he is entitled to one. We need some breathing space. Allow us to do whatever we want to do, as long as it is not too extreme (I mean, of course you shouldn’t allow your boyfriend to go kiss other girls right). Allow us to go pub to drink or to have fun with our buddies. Well, I guess most of us don’t mind if you actually ask if we could bring you along, if you are feeling that insecure. Right, guys?

2. Trust
Since we want freedom, of course we want your trust too. Being around with girls or texting another girls doesn’t mean that we are going to neglect you or you are going to be ‘replaced’. No, not at all. We still love you as much but we have friends too. In order for a relationship to work, mutual trust is really important. What’s a point of a relationship if you are going to be suspicious in every thing your partner do? You just got to trust them in whatever your man says,

Oh ya, don’t be offended if your boyfriend decided to take a peek on a girl who just walked pass, guys are programmed to do that. It doesn’t indicate anything, it doesn’t prove that the other girls are prettier/hotter than you. Guys just want to take a look. I mean, an artist does take a peek on other artists’ work even though he is a renowned one. Just make sure he isn’t erecting, that’s a total different story. That’s when you can really give him a good slap in the face.

3. We Are More Than A Gift Machine
All girls need to know this. We guys need to be sure that we are more than just a mere gift machine. I know some people’s love language, according to the 5 love languages, is ‘receiving gifts’. But expect gifts at a more appropriate timings. Not all guys are born in the Gates or Slim family, who can even afford to buy you a Lamborghini Veneno Roadster and a Central Park apartment in NYC. Let’s be realistic, gifts from guys come as a bonus, despite some are necessary during special occasions. Expecting too many gifts from guys will only result in them suffering in financial stress. I am sure you don’t want your boyfriend to start robbing people or suffer from clinical depression while trying to find money to get gifts for you almost every week. Prada or Gucci bags anyone?

4. Understanding OUR Language
Girls want the guys to understand their language, a language that even a man who masters in both sign language and morse code has difficulty understanding. For the sake of God, we are not freaking encoders. We love things to be direct, because that’s how we work. Of course, all the guys are trying their best to understand what the girls are trying to mean in their words, ever so simple on paper yet complex in meaning like a contender for the annual Nobel Prize for Literature. What we guys want is that the girls are more straightforward. Yes = Yes, No = No. Don’t mix and match. At least we know what is expected of us so we can spend more time treating you like a princess instead of wasting time figuring what on earth do you actually want from us.

5. Commitment
Everyone wants a committed partner. Everyone wants quality time. The girls expect this from the guys, so do the guys expect this from the girls. I know everyone is busy with almost everything in life, from work to family to friends. But hey, you’ve got a partner too. Enjoy all the moments together. I need not say much because you know it yourself. Ask him out for dinner or to just slacken off together, yes, it doesn’t always necessarily be the guys asking the girls out. Anyone can just take the initiative.

6. Acknowledgement
Girls want to feel special, want to hear praises because their low self-esteem (which is particularly true because at least 97% of the girls think that they are ‘not up to standards’. Guys, we of course give them the necessary praising from time to time, because most of the time, we meant what we say. I mean, if the guy doesn’t find your attractive, he won’t be attracted to you, let alone spending all the mights and powers to woo you. Likewise, guys need acknowledgement from their partners. We are vulnerable too. Walking pass Abercrombie and Fitch and looking at those hot guys on the poster makes us feel insecure too. We just need to hear some words of assurance too, that we are the only man to treat you the best (apart from your dad and probably, brothers). I guess that will probably make us feel more confident.

7.  A suitable amount of personal touches
We don’t talk about the greatest desire of all men (allow me to generalise), which is SEX. Though I must admit guys wants sex. But that’s not even go there for now. Guys love personal touches, even though it does not go to the extreme. A little cuddling will make him feel rather happy. Give him a gentle kiss on the forehead or the cheek or the lips whether he is happy or sad. If not, give him a hug, I guess no one will turn down a hug right? It will really make his day. He will feel your love through all these. Of course, don’t over do it.

Of course, the above are from my point of view on what men truly want in a relationship. I don’t wish to generalise things and assume that that’s the thinking of ALL the men.