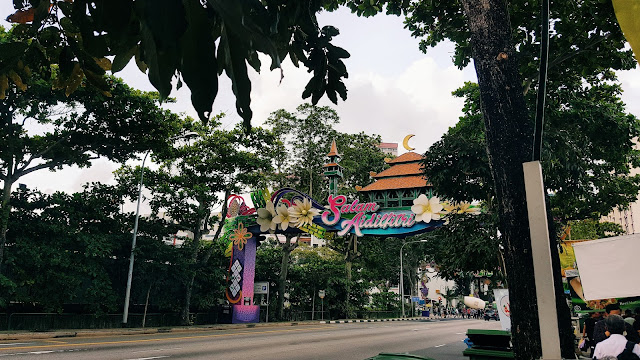 It is the Ramadhan month. And for those who don’t know what Ramadhan is, it is the ninth month of the Islamic calendar observed by Muslims worldwide as a month of fasting to commemorate the first revelation of the Quran to the Islamic Prophet Muhammad. It is narrated from Imam ar-Ridha that “Verily, the month of Ramadhan is a month in which the holy Quran was revealed. It was in this month that the Prophet of Islam was infirmed of being a Prophet. The Night of al-Qadr which is better than a thousand months and therein every matter of ordainments is decreed is in this month.”

So what happen during the ‘Month of Fasting’?
Muslims all over the world will observe As-Sawn (fasting), that means to refrain from food and drinks, throughout the daytime – from morning Twilight after the Fajr prayer till the evening twilight after the Maghreb prayer). Fasting is an obligation of the Islamic religion, where it is being constituted as one of the Five Pillars of Islam.

Why do Muslim fast?
The reason behind the rationale of fasting is simple – self-restraint. It is definitely not easy to fast for more than 11 hours, yet Muslims, during this holy month, are able to achieve such feat. As some scholars have put it, fasting acts as a mean of giving up haraam things, hence avoiding things or actions that Allah forbids.

As stated in the Quran (2:183), “O you who believe! Fasting is prescribed for you as it was prescribed for those before you, that you may observe al-Taqwa (self-restraint).”

Living in multi-cultural Singapore has its benefits. Since we live, work and play together regardless of race, language or religion, we get to celebrate the culture of different religions here too. We get to have days off during Chinese New Year, Hari Raya Puasa (Eid al-Fitr) and Haji (Eid al-Adha), Vesak Day (Buddha Purnima), Deepavali (Diwali) and Christmas.

Since during Chinese New Year, we have a carnival-like bazaar set up along the streets of Chinatown, it makes sense when we also have a bazaar being set up along the Malay heritage area of Geylang Serai. Being Singaporean, such bazaar should not be missed because everyone is talking about it. Even The Smart Local called the Ramadhan bazaar ‘The Largest Pasar Malam of All Time‘ – which I have to kind of agree on it.

Two days ago, my JC clique (Clar, Mich, Nic and Yapz) and I decided to head down to the bazaar at Geylang Serai (apparently there are more than one Ramadhan bazaar around the island) to check out the food and drinks that were being sold there.

AND OF COURSE TO DO HENNA. 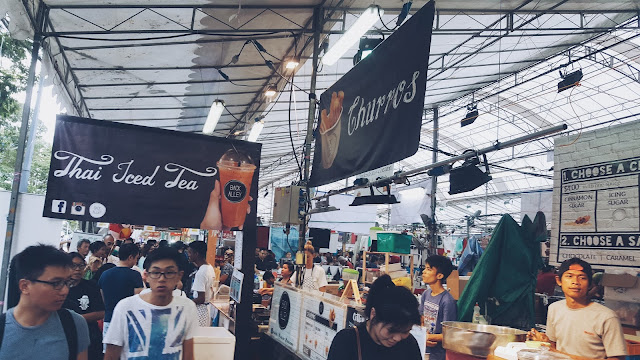 We reached there before the sunset in order to avoid the after-work ‘whole world appear suddenly out of nowhere’ crowd. At 5.30PM, the crowd at the bazaar seems to be ‘just right’ – not too many people but also not too little. We were able to find our way to every store and destination with ease.

We started off by buying Crispy Squid from this Yum Yum store because I swear CRISPY SQUID IS THE SO DAMN ‘IN’ THING NOW. Most of us came to this bazaar with the thought of having to try this newly-adored delicacy. Hence, when walked past this store and some of us wanted to walk around first before buying, it was met with a certain resistance. Of course, such defiance does not last long because who would say no to food huh.
We were lucky that we got our hands on the food first because once the peak hour arrives and the queue starts to form, you will be wondering how long more will it takes in order to fill both your stomach and curiosity.
Verdict: Quite well done, the meat was tender and juicy. The downside to it is that the flour (aka the crispy part) tend to be ‘detached’ from the squid meat. So when we were eating, we were eating the crisp and the meat separately. At $7, it might sound a little expensive but hey, it’s the festive season. CAN TRY.

The another highlight of the bazaar. The Watermelon Volcano is the sex. It is the solution to all those heaty fried food that you will get to enjoy while you are at the bazaar. And of course, we got it because we want to look hilarious holding a big round thing at our chest level while walking around the bazaar in search for more food taste it for ourselves how wonderful this critically acclaimed drink can be. Served with ice-blended watermelon juice and numerous watermelon balls in half a watermelon, we, or at least I, could feel a sense of liberation from the Singapore heat and humidity. One of us even commented with, “It feels like summer.”

Verdict: The $6.90 Medium-sized definitely can quench the thirst of more than 2 people because 5 of us simply just shared that big ‘bowl’ of watermelon ice-blend and it seems to be just enough for us. Either we aren’t that water-deprived or they are really generous in their serving. Of course, for those who thinks that they want to make queuing for the drink more worthy, you can try getting the large one (supposedly for 3 – 5 people) at $12.90. MUST TRY.

As we continue on in our exploration of the bazaar, we walked past this store selling nacho chips. Yapz and Nic stopped in front of the store and decided that they wanted some nacho chips. So they ordered Beefy Cheesy Nacho Chips. I did not get to taste it because, well, I cannot eat beef due to my religious obligations. But looking at the girls’ faces, it seems to be a delicacy. The beef sauce, filled with meat, was drizzled above the chips coupled with both mayonnaise and chili sauce. It looks heavenly and at $3, it is just so worth it.

In every Pasar Malam, we get to see Ramly Burger being sold. Over the years, it has slowly become the must-eat food in all pasar malam. Hence, when I walked past one of the few stores selling Ramly Burger, it is an involuntary action that brought my legs to the front of the store and to order a chicken burger.
Verdict: Just like every other Ramly burger. But then again, it is the must-eat in every pasar malam. Just need to find whichever store that has the shortest queue and get one from them. You wouldn’t regret until you hit the gym the next day. SHOULD TRY.
How can we claim that we had patronised the Ramadhan Bazaar without leaving a mark of proof on our hands? So the girls went on to find their friend, Wendy, who has set up her store ‘Wendy Peaches Henna’ at the bazaar. Since they had patronised her before in the past, they were searching for pictures of their hands (with henna designs on them obviously) from the ‘catalogue’.
Like us, a lot of people were there to have their henna done. Each henna has its individual characteristics that fit just right with each individual hand. We were lucky that when we got there, Wendy was almost done with her previous customer and we need not wait long before the first person from our group (Nic) got her henna done.
We sat around her while waiting. Although I felt peculiar initially because there weren’t much guys there wanting to do up henna on their hand. Most guys were there to accompany their girlfriend while I was there with my girls and to join in the fun together.
I was the last of the group to have it done. It was my virgin experience having someone to draw henna on me.

Wendy: How do you want yours to be?
Me: Just freestyle.

For me, I think art can be portrayed in its finest form when you give the artist the freedom to do anything, not to constrain him/her to a certain theme or design. Freestyle is where artists can utilise their creativity and to create something unique and exclusive (I love everything to be sui generis). Wendy then went on to tell me that she will do something like Nic’s but more masculine.
That sounds like a good idea.
It took about 10 minutes before the artwork appeared in its complete form on the back of my left hand. It was pulchritudinous. I love it!

See, these henna design just look elegant and graceful. So do support Wendy by dropping by her store – Wendy Peaches Henna (Booth MV232A) to have your henna done while you visit the bazaar! Oh, you might also want to follow her on Instagram (@wendypeacheshenna) (and remember to ‘like’ that photo above alrights! HAHA)
While we were waiting for our henna to be done, Yapz and Nic were talking about a gigantic cup of drink a random guy was drinking from. They were wondering where did he get that drink from. I think they were deprived of water by then.

Of course in the end, I didn’t go and ask him because Nic said no need.
But then, it didn’t take us quite long for us to locate the store selling it. The pakcik was damn loud and his touting was audible from far. He called the drink the ‘Knock-Out’. We got a huge cup of mocha after a rather long and ‘tense’ discussion because Mich is lactose intolerant. We were trying to get something with less milk content so that she wouldn’t suffer the aftermath of it.
After taking the first sip, we understood instantly why they called it ‘Knock-Out’. It was so sweet that you might knock out.
Verdict: No doubt value for money. It’s like the pasar malam version of Starbucks but much more worth it. If you need some caffeine (although they also have other non-caffeinated drinks), you might want to buy from this store. MUST BUY.

We didn’t explore the entire bazaar because we went to Nic’s house for a ‘Make-up Tutorial’ session – ok, basically to just lepak at the house while using that chance to ask her to showcase her make-up collection.

I think I should be returning to the bazaar again one of these days before hell resumes and before I fly off for Hong Kong.