I am probably going to chain up a new internet acronym. I mean, what’s the meaning of the internet without interesting acronyms.

Okay. Maybe this isn’t as interesting as I think it should be. However, this must be something that everyone may like to use.
TGFF.
Thank God For Friends.
I admit this was inspired off TGIF (for those who don’t know, that means ‘Thank God It’s Friday’)
So last weekend (yea, I am sorry that this post is like 2 days late, but well!), some of my really close friends back in my secondary school days decided to come to my house to study. Ok. Most of them spent only 60% of the time actually studying.
Most of the time, most of them are actually doing this: 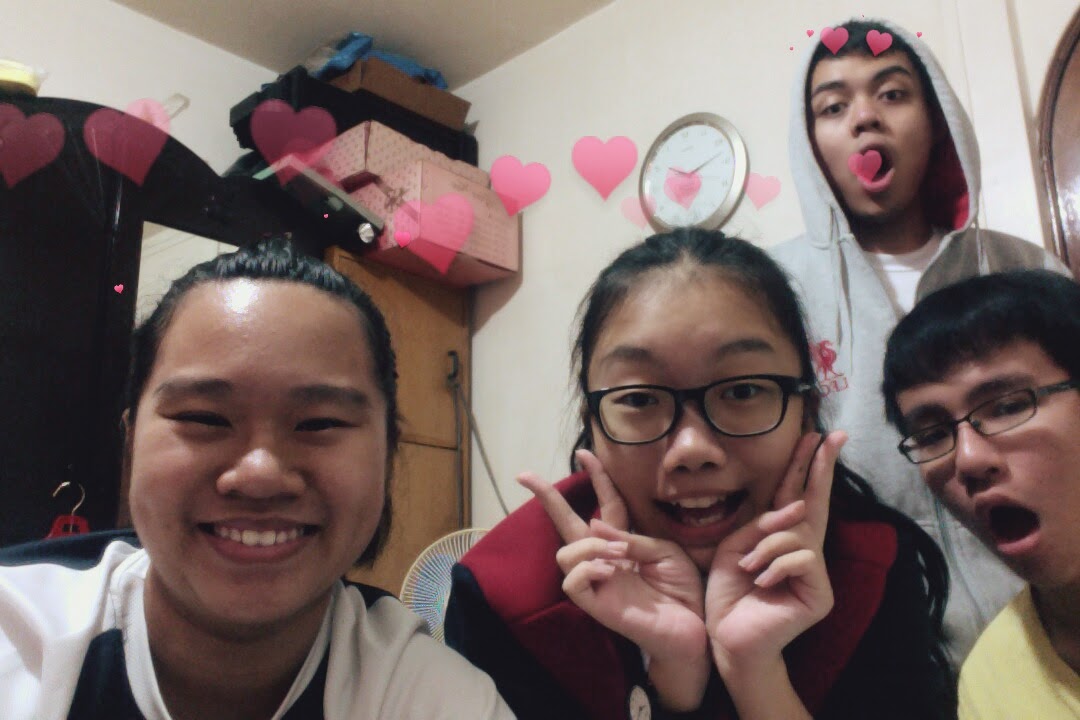 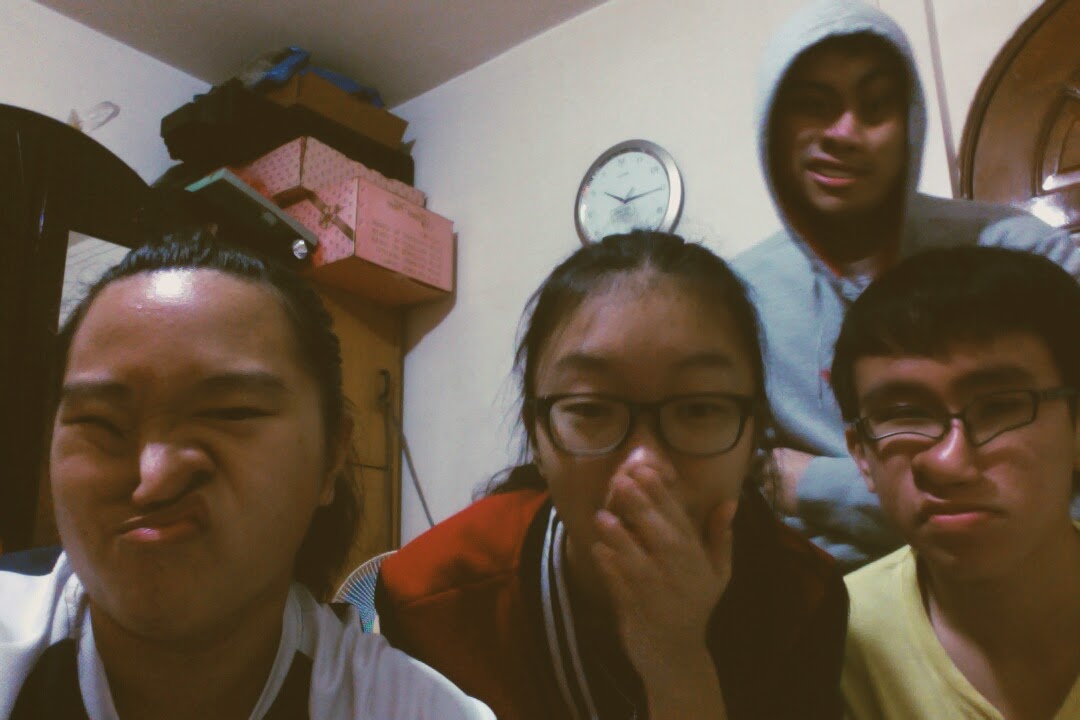 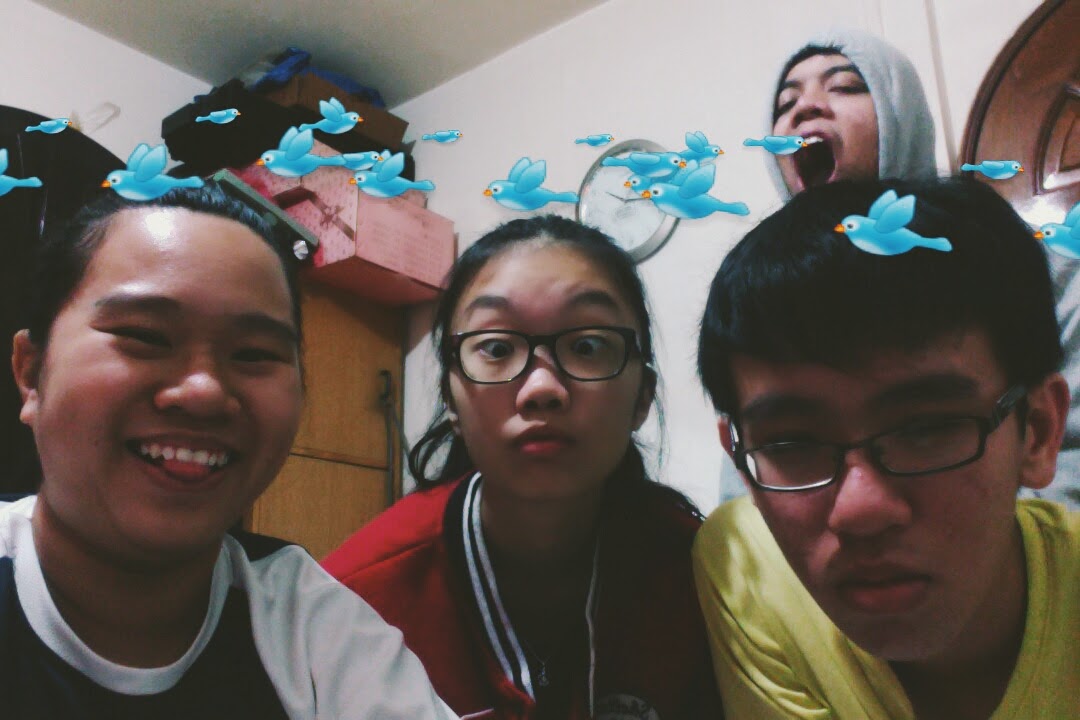 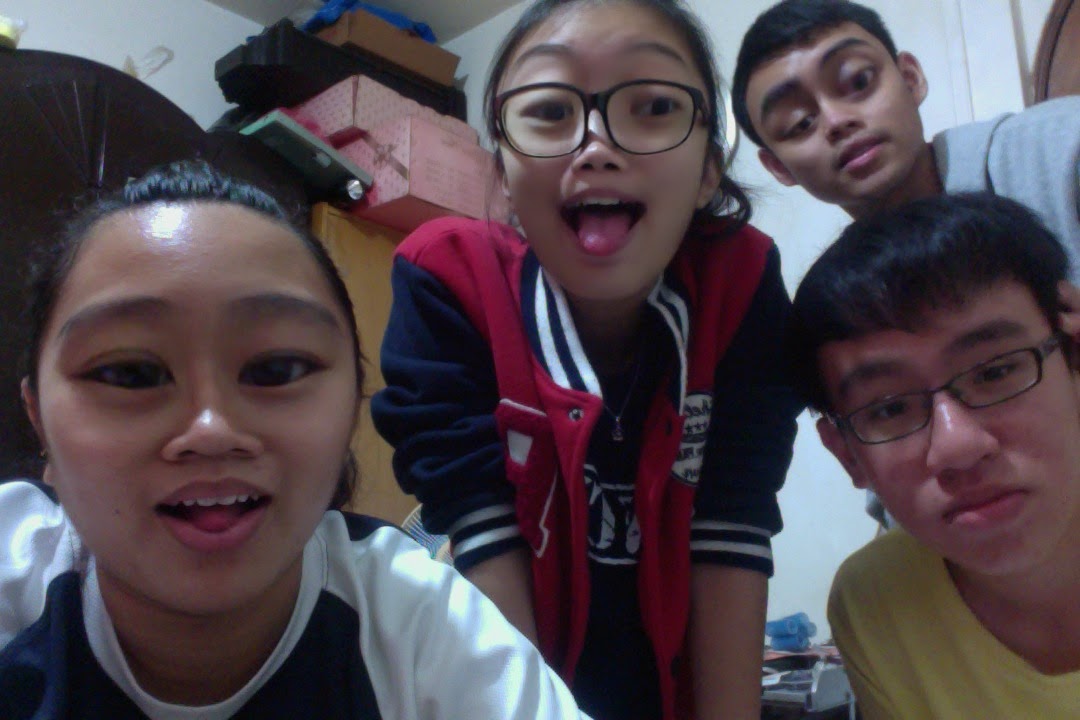 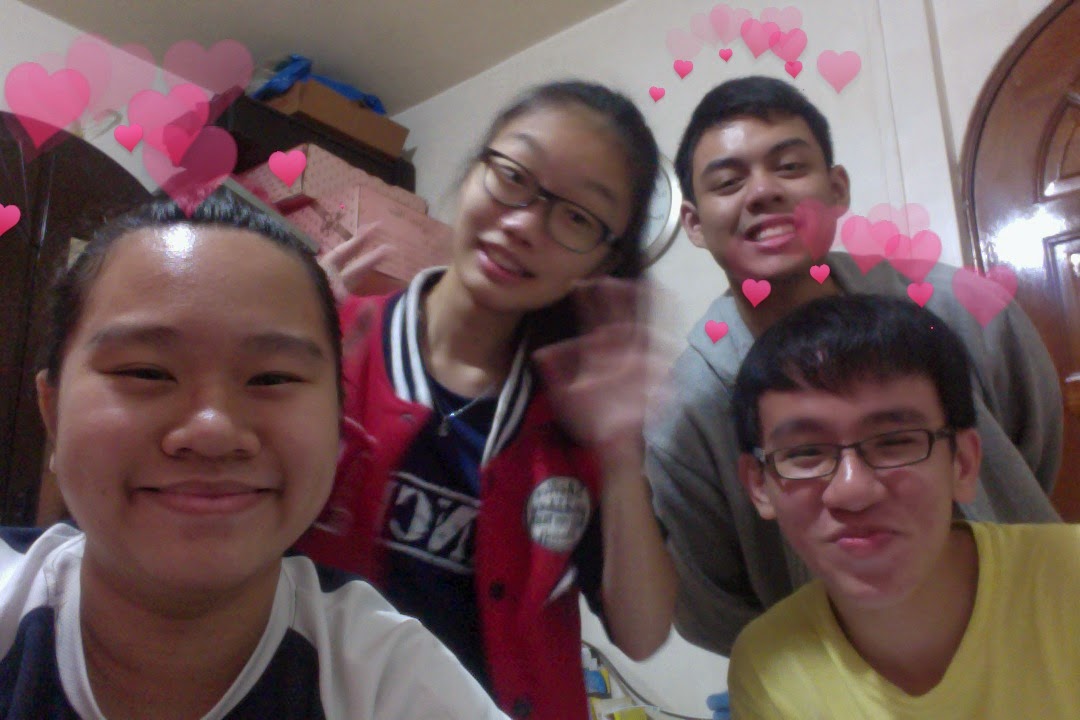 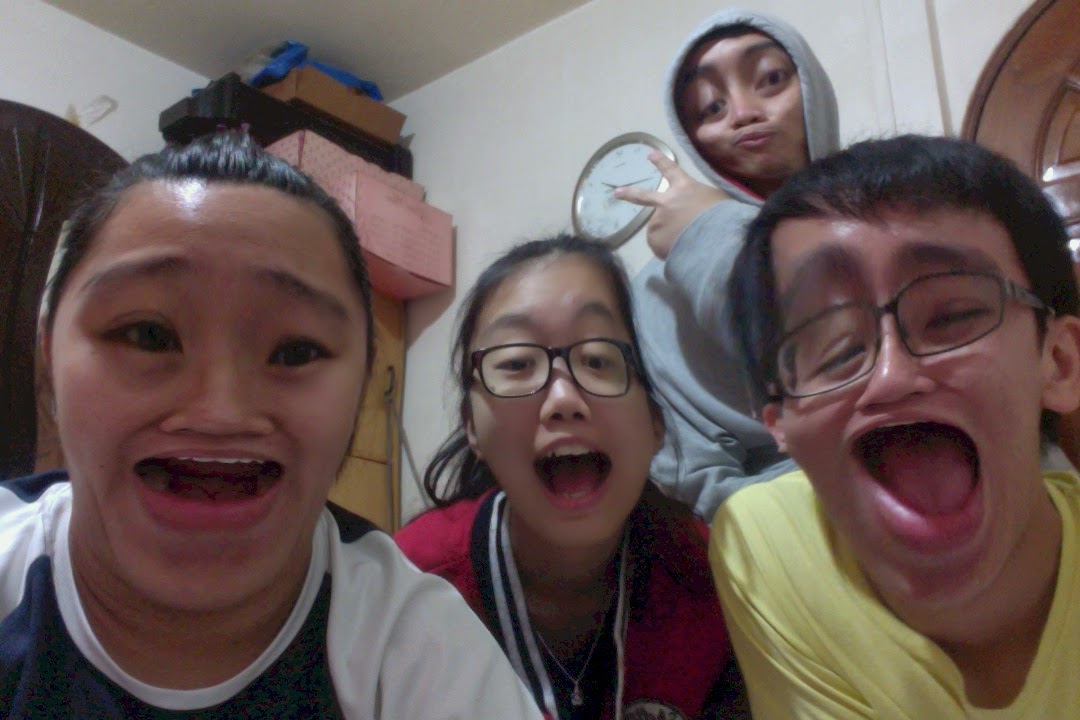 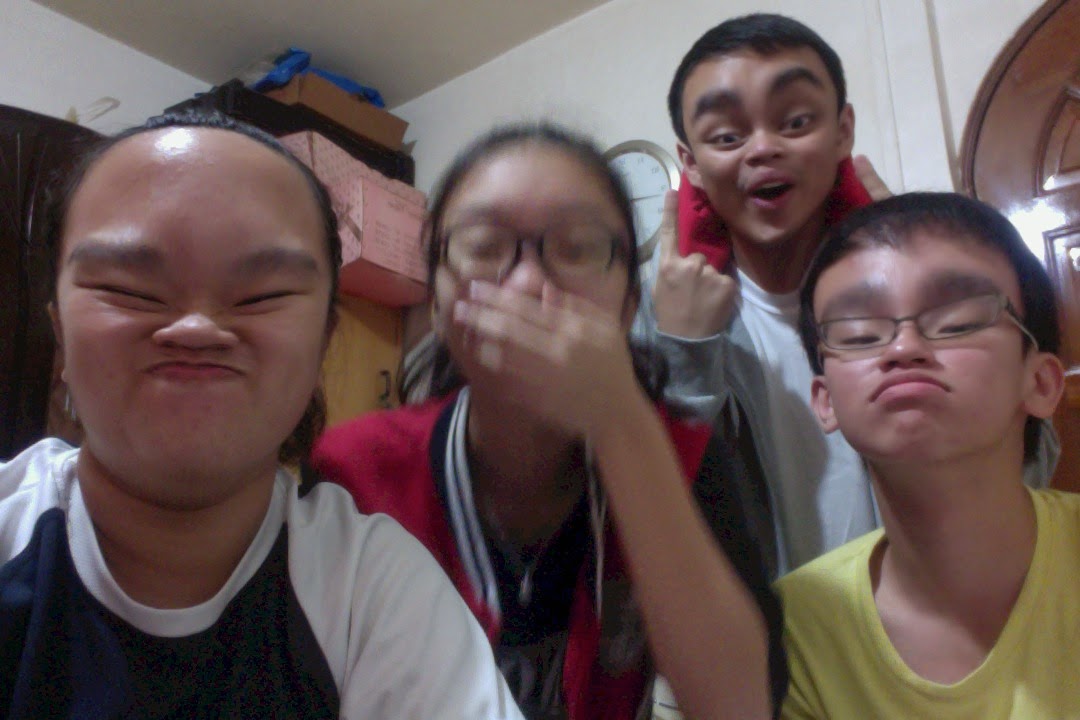 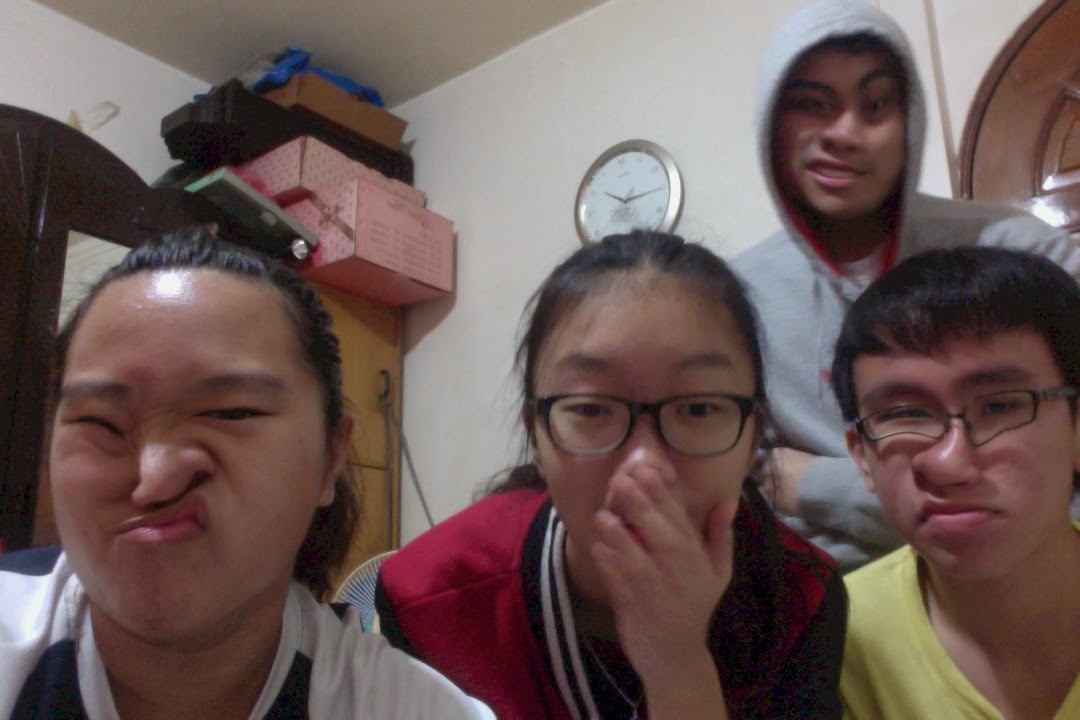 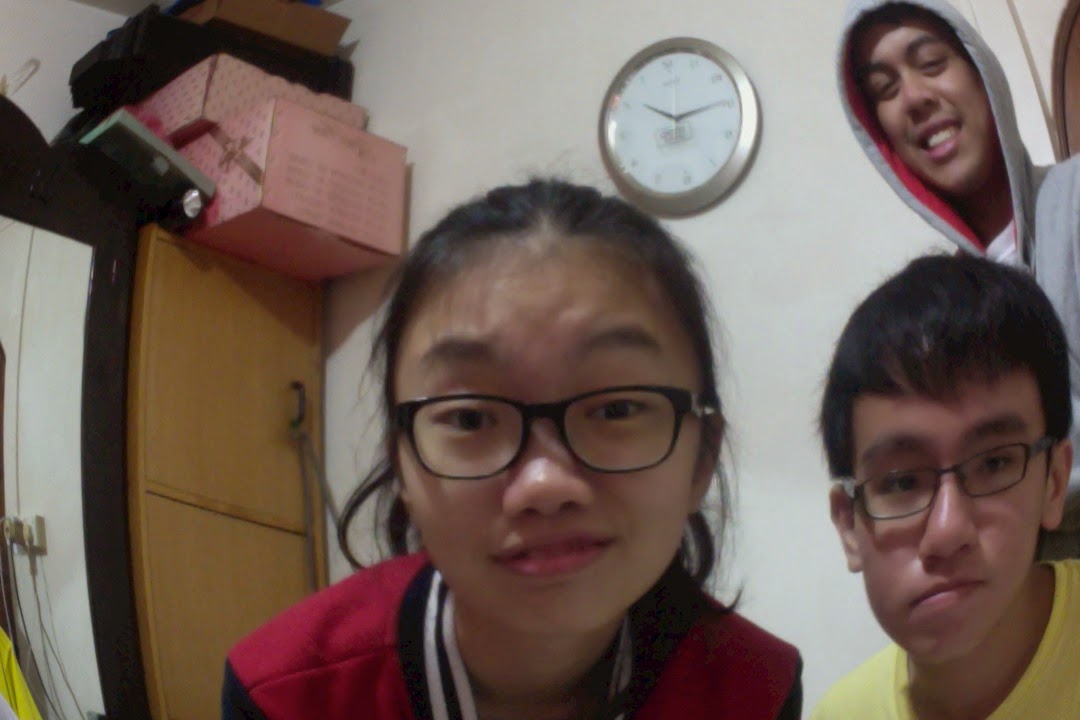 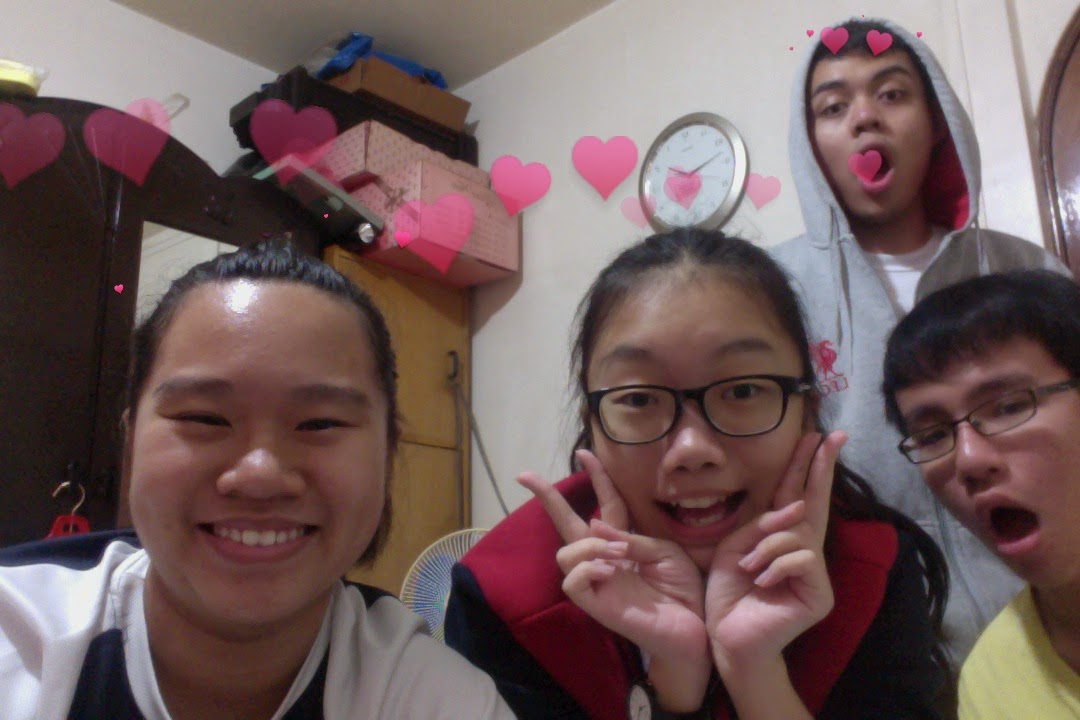 PLAYING WITH MY PHOTO BOOTH!
Haha! Well. That’s the first time I am using the Photobooth on my laptop. It is really kind of fun actually. I mean, just look at the faces above. It makes us look erm… kind of retarded. 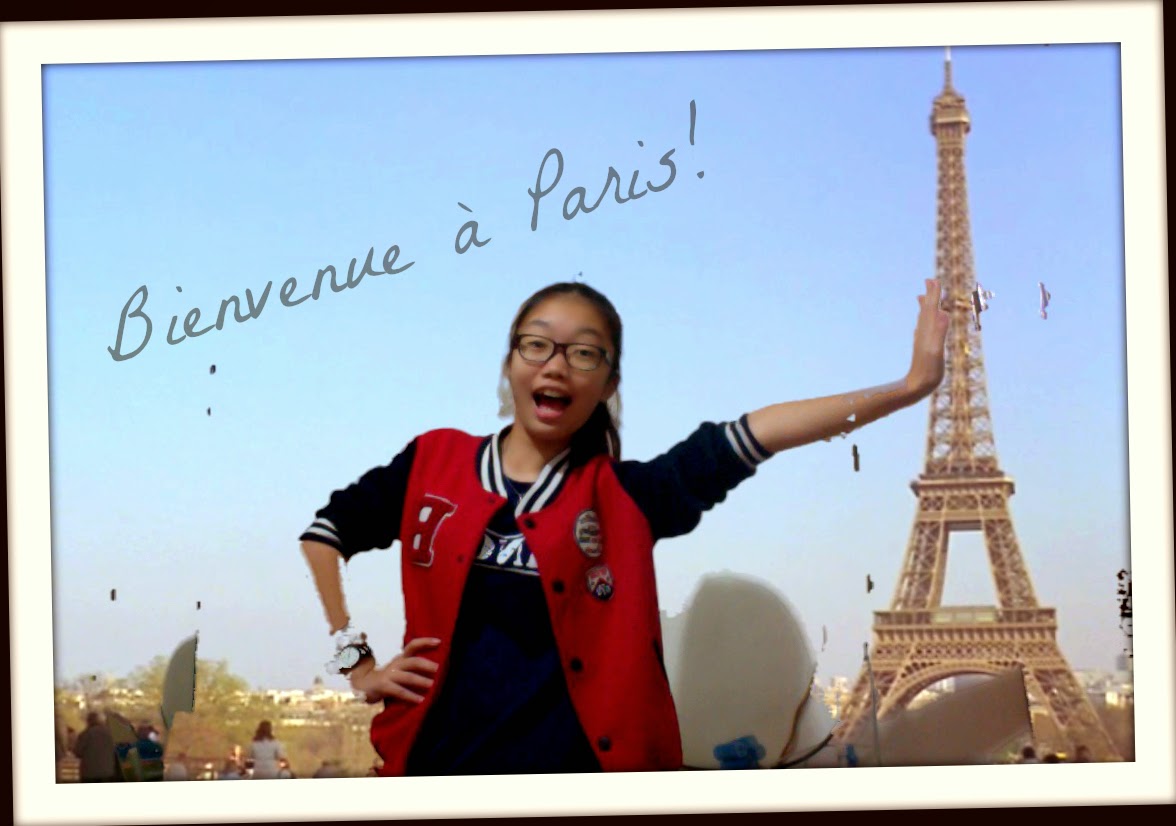 Thanks to Photo Booth, ‘travelling’ is made easier. Bienvenue a Paris! 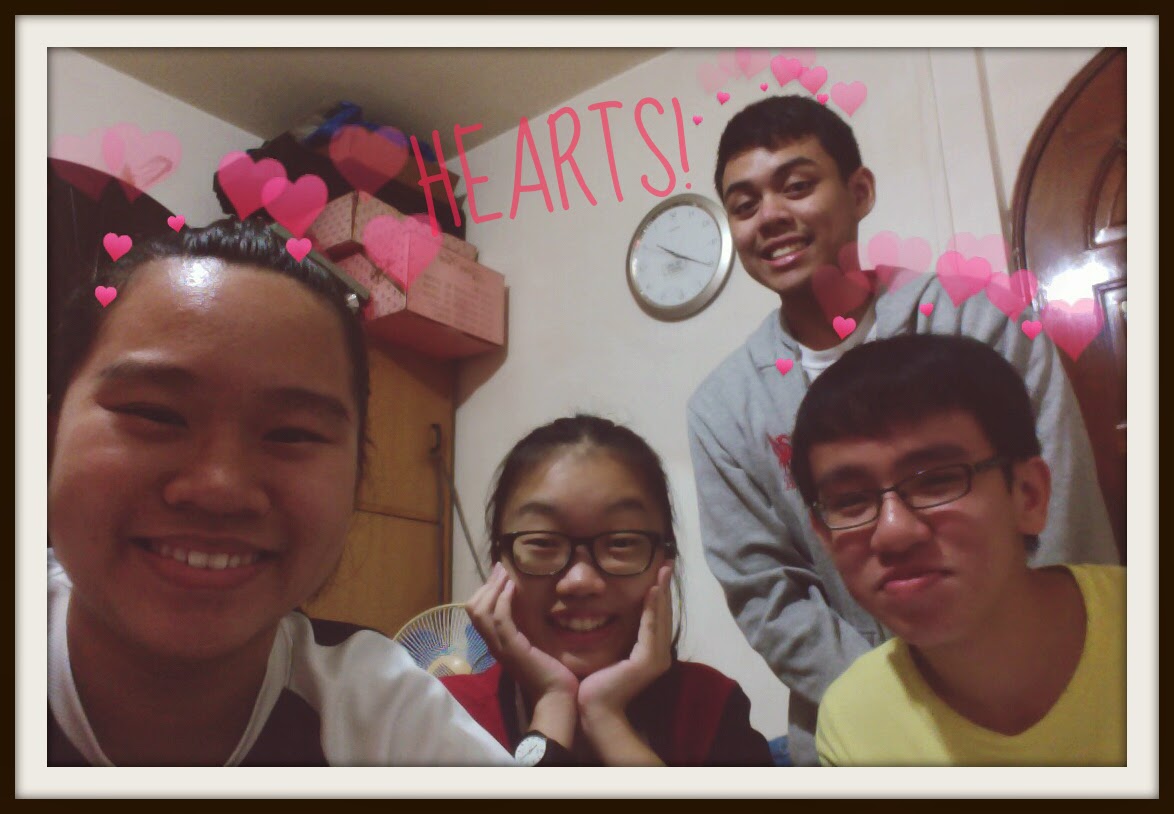 And I guess I kind of like this picture quite a lot because of the HEARTS! WOOHOO! *inserts heart emojis*
Photo booth wasn’t the only distraction. Junwei’s new Sony phone was another distraction. Why? Because he finally got himself a proper phone. Yes, a proper smartphone which looks erm… proper. 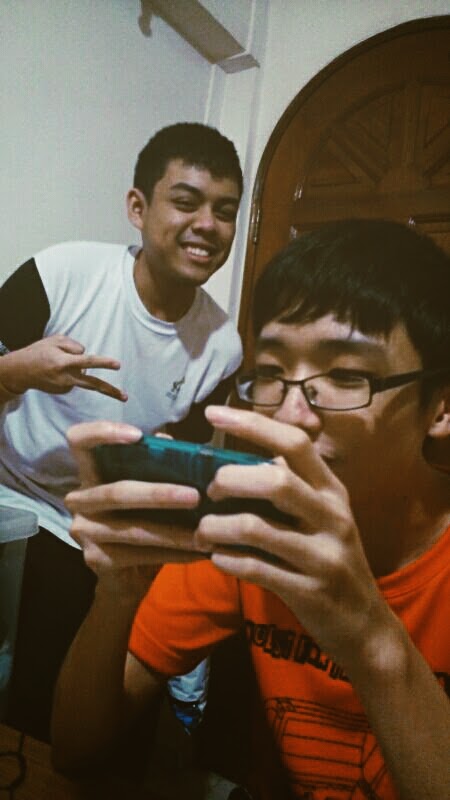 And as usual, the main function of his phone seems to be playing mobile games… 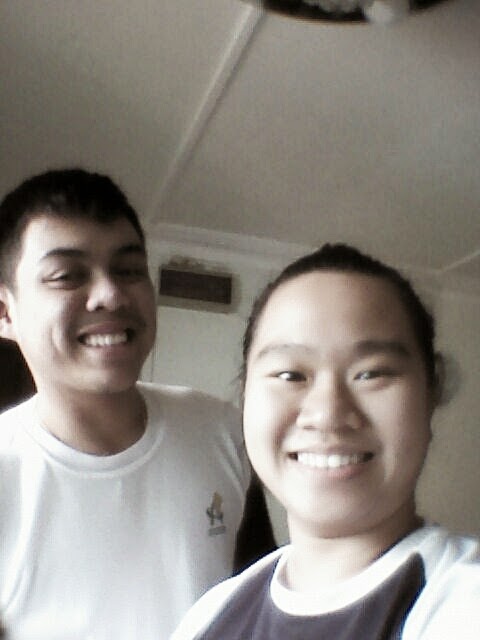 And probably for Meiqi to run around to take selfie with.

Okay. To be fair to them, they really did study while I decided to stay in my room to watch some movie showing on Ch8. And then came out to the living room for the cable TV. And stumbled into a rather cool K-drama (ohgosh, I am actually interested in a K-drama…) (Image: Asianwiki)
NINE: NINE TIMES TRAVEL
나인: 아홉 번의 시간여행
This was the second drama in two days that I’ve watched in regards to erm… time travelling. Not sure if if it’s the trend nowadays to film dramas of such a genre.
It was really interesting that I actually stayed on the seat and survived two episodes of each. Me and Junwei even went online to check for its synopsis. Guess what? Mind-blowing.
Okay. Which time travelling drama wouldn’t be mind blowing? I mean, if that happens in real life, to me in particular. Going back in time to stop the second World War and then coming back will cause a total difference in the reality world. Every action changed in the past will change the course of events thereafter, and hence resulting in a significant change to the present. (Suddenly that sounded like some quote from some legendary figure, but that’s just from me alright? :P)
Since I was on this topic, didn’t I mention about two dramas I’ve watched in two days that are about the same genre. So here’s the other drama… (Image: mydramalist)
A. I. KNOWS LOVE?
安堂ロイド
Yeap. This is a J-drama. I was bored at night that I was browsing through all the channels in my cable TV until when I saw some channel with the name Kimura Takuya written on its description. Yep, many people, actually in fact every of my friends didn’t know that I like Kimura Takuya (Uh-huh. Because of his Gatsby’s advertisement :D). So I decided to watch it although I don’t really watch J-drama. Me ish bored.
And so, the drama was really nice (I was watching Episode 5 and 6). I mean it was really cool with those future human-like robots running on some sort of OS. And also it was kind of dark because these robots are being hired by some human to kill other human.
Plus I spotted a really kawaii actress. (Image: whicdn)
And here’s how she looks like without those nurse dressing:

(Image: quoll2nd.blog.shinobi.jp)
She’s Honda Tsubasa. Looks kind of kawaii with that face shape and hairstyle ya? The sad thing is that her character in the drama, Suppli, who is actually the repair team for Kimura’s character died after trying to save his life.
Alright. Enough of girls. Let’s go back to Kimura. And erm… his character. I kinda like the name of his character in this drama: Ando Lloyd. Doesn’t it sound like ANDROID? I mean it’s like so cool. And when something is wrong with him, there will be like some sound saying ‘Restarting system”. 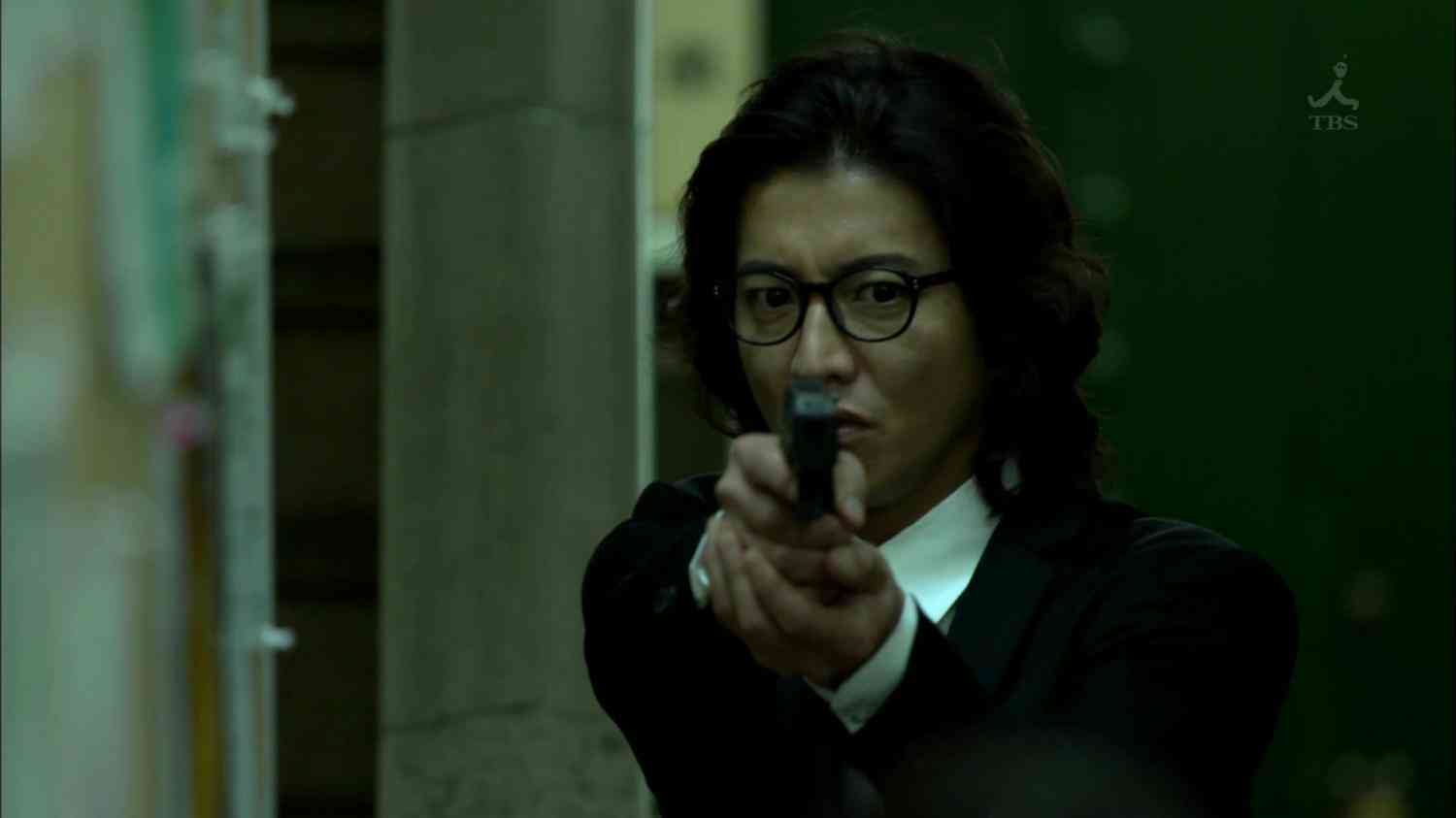 (Image: up.gc-img)
Look at how charming he is when doing the shooting scene. (Image: Ryouchi)
And when he’s pretending to be a professor that looked exactly like him.

(Image: sinaimg)
And here’s Ando Lloyd showing his powers! Hehe! ^^
There is this particular scene that I liked a lot in Episode 5, when Ando Lloyd (yes, pretending to be Professor Reiji) was giving a lecture on erm… time travelling.
Here’s the link if you want to see what I am referring to: http://www.epdrama.com/ando-lloyd-ai-knows-love/ando-lloyd-ai-knows-love-episode-5/2/
And fast forward to 01:48 onwards.
Here’s a transcript of the speech, according to the English subtitles given on the screen:

Ando: “‘Everything in the future is already determined.’ So claimed the French genius astronomer, Pierre-Simon Laplace. This is his reasoning: Everything that is about to happen is a casualty of the past. By this logic it is possible to track every particle in the Universe, then it is possible to calculate everything that is about of happen. In other words, everything in the future is already determined. However, we can’t even track 1% of what is happening in the world. We cannot understand it. Thanks to our ignorance, we have empty hopes and dreams. And in turn, makes futile efforts. Even though everything in the future is already determined, then let’s try to disprove Laplace’s theory. Can one of us time travel back to Japan in December 1 of 1941, and tell them that Japan will suffer greatly if they joined the war? “

Nanase (Reiji’s sister, who is an associate professor): “If Professor Matsushima Reiji’s theory was true, then it is possible. Although we have mass, so we can’t go back in time. But data has zero mass, so it’s possible to send information back and forth though time. That’s what Professor Matsushima theorised. “

Ando: “That’s correct. Information has zero mass. Therefore, people’s desires can transcend time and space. As you can see from this equation, the speed of light is constant. However, both light and space have been confirmed to bend due to gravitational force. *Starts drawing some graph on the black board* Theoretically, there is another shortest path for light to travel from points P1 to P2. If there’s a particle that can travel through the path, than it is possible to exchange data through time using that particle. Of course, mankind does not currently possess such technology. But one day, someone here is sure to create that technology. Pierre-Simon Laplace is a great physicist, a philosopher, and a genius, but he underestimated the existence of life. Omniscience is not needed. People’s desire can change the future. They can even undo their mistakes in the past. Life is the power to lead the future into the right direction and to prevent a single life from ruling the world indefinitely. All lives end and they must hand over the baton to the next generation. Never forget that.”

And I am really proud to see how serious my friends were when they are doing their homework and/or revising their work. They are taking responsibility for their future. They are studying hard to get the grades they need for their dream course in the University. Most of them know what they want in the future and they are pushing towards their goals, in order words, leading their future on the right path.

However, All Work But No Play Makes Jack A Dull Boy. They know that they have to balance their work and play. Hence, we decided to go down to play Table Tennis when everyone was more or less done with their work. Living a healthy lifestyle (like what I am trying to do right now) is also a mean of taking responsibility of your future. What if you achieved your dreams? What if you get to earn big bucks, buy whatever you’ve always wanted? You can’t enjoy much when you have no health. Leading your future in the right direction is to balance work and play (and/or exercising).

Remember, YOUR future is in YOUR own hands. 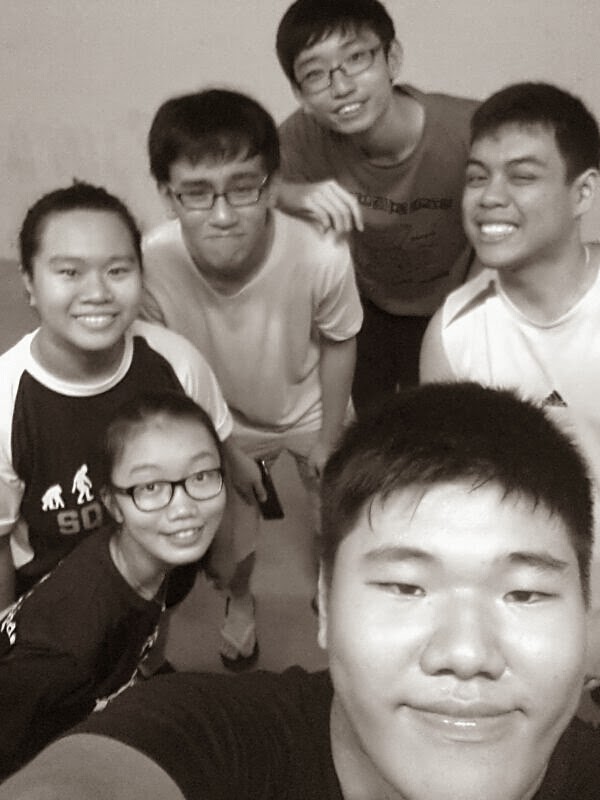 And ohya, here’s a selfie after playing table tennis!