Yeah. Before I begin with what I want to post, I shall wish everyone a (late) Merry Christmas!!!

So yesterday, on Christmas Day, was a day I’d been really looking forward to! It’s the day when I hosted a Christmas Day dinner for my beloved peeps from my Sec 4 class! I was really happy (and yes, I AM still happy right now) that this ended off as a successful event. Well, definitely must feel happy because I had planned and organised the entire event since a month ago. It’s a long process to plan and execute the event, and also to predict any problems that might occur and to do up a backup plan. It has been really long time since I last organised an event (Yeap, the last being some school event back in my Secondary School days when I was an EXCO member).

I must admit that from choosing the food to buying the presents for these beloved peeps was really really difficult. But it’s alright! Because seeing the smiles on their face at the end of the day, made me think that everything is just worthwhile.

Ah. Shall not talk much about the planning process or anything before the day itself. Shall share with everybody the joy that we had (or more specifically, the joy that I had) yesterday!

So yesterday, before everyone came, I was keeping myself really busy with all the housekeeping, collection of food, last minute present shopping and wrapping of the final batches of the gifts. While I was really really busy, the rest of them (excl. Yichen, Kayven, Qing and Junwei) were at Brendan’s house baking the cookies and enjoying themselves! (hehehe!) 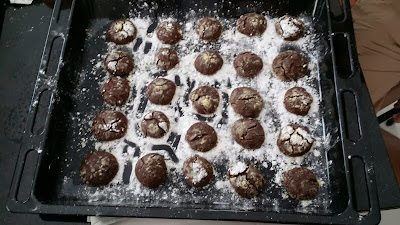 The cookies that they tried to made. And yeap, they brought it to my house. Ate them only today and it’s really delicious! 😛
Back to my side here.
I was running out of time, some presents not yet wrapped, and a birthday cake was awaiting my collection at Clementi. Luckily, I found someone to help me! Chen Yu! He came and went to collect the cake for me. OMG! THANK HIM SO MUCH!!!! He helped me to make sure everything was done in time.
The peeps came at around 7pm. And I was shocked by the clothes they wear. Some of them a bit formal only uh. The first thing we do was of course to greet each other with Merry Christmas! HAHA! Thn they settle down to play Charades. And while they are playing, I was heating up the Turkey, ham and the pork knuckles. Thn some guys came in (Adam and Brendan) to check on me. And thn these 2 decided to get Chen Yu to help us buy some beer to go with the food. HAHA!
Once Chen Yu returned with the cake, the few of us went to the nearby shop to get some beer. Yes, and we returned with 2 cans of Sapporo. Aside from shopping for beer, we went around the neighbourhood in search for candles for the birthday cake, and while on this mission, Brendan saw a rather big ass lighter and bought it for $1.20. He was so amazed by that. Wow.
Chen Yu, Brendan, Adam and me met up with Junwei and Yichen before returning back.
And back at home… They were playing with my camera… 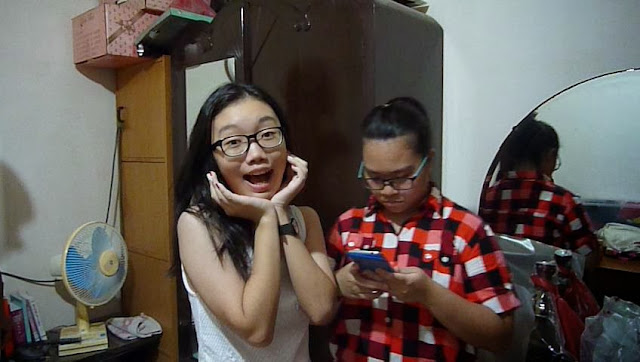 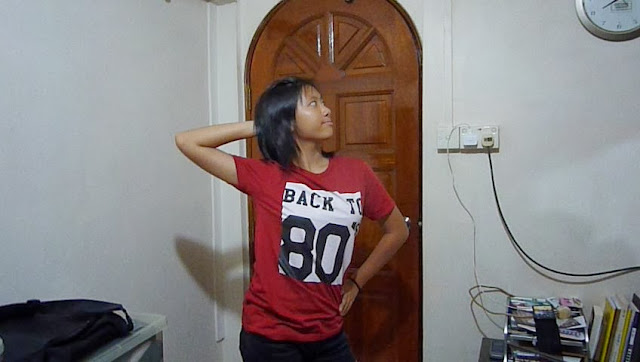 Aspiring to be a future model. 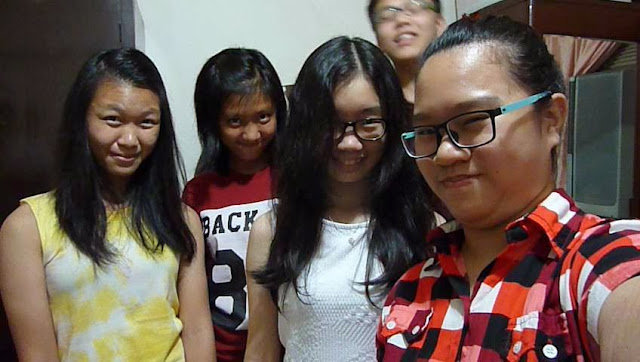 The girls trying to do some creepy smile…
Qing had arrived while we were out. And since we returned, it means that everyone has arrived! Time to start the feast!!!
Basically, it was Brendan and Adam doing the cutting, Chen Yu and Weihao doing the testing and me doing the heating up. Ok. Guys, now times have changed. The girls are outside watching tv and majority of the guys are in the kitchen doing the preparation of food. Let’s give ourselves a round of applause.

(Image: weknowmemes)
Must really thank Brendan and Adam for doing all the saikang of cutting the turkey, the ham and the pork knuckles! THANK YOU! 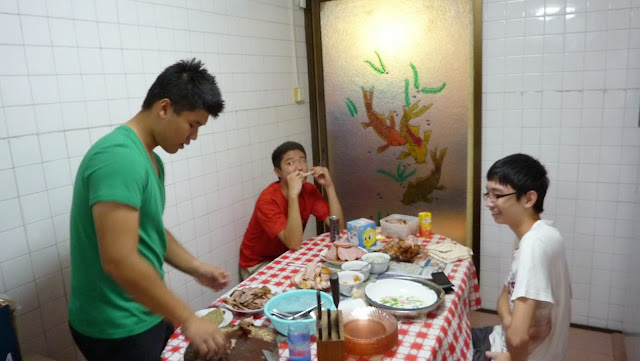 Look at Brendan trying to cut the meat. 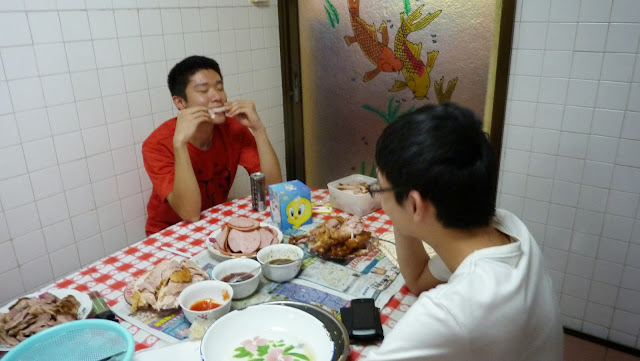 Junwei and Chen Yu got the privilege to have some of the meat first because they can. 😛 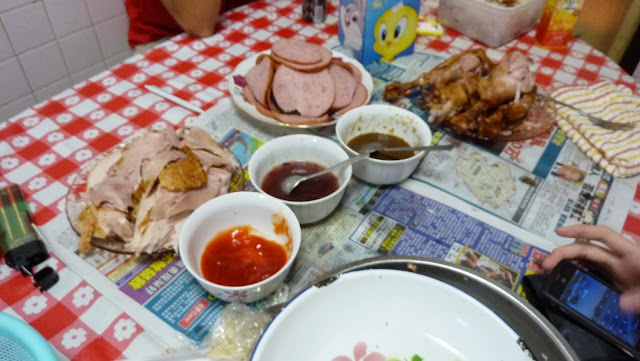 The ‘feast’ for the night!!! Sorry, Brendan’s box of turkey was not caught on film. Gee… 😀
During the meal, some of us guys were gathering around the table, drinking beer and talking about any bullshit that we can think about.
So after the feast… Here comes… 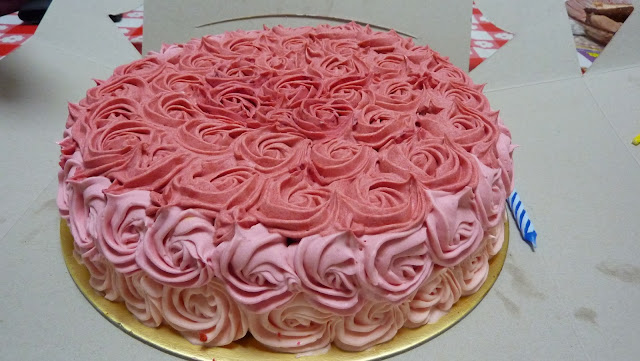 Yesh!!! It’s time for the surprise! While the rest of them are watching tv in the living room, Brendan and I were trying to prepare the cake and the candles. And when everything is ready, brought the cake out for the surprise!
“HAPPY BIRTHDAY TO YOU…”
As everyone in the room started singing, Qing was staring at us with her poker face and Junwei was seating by my foot, staring around. They didn’t know what happen. Well. I understand the feeling, it’s the exact feeling I got when Yong Kang and Co. surprised me with a birthday cake during the BBQ session on the 26th October. Well well well. That was 2 months ago.
Yes Yes Yes
They were both caught by surprise. *Mission Accomplished* 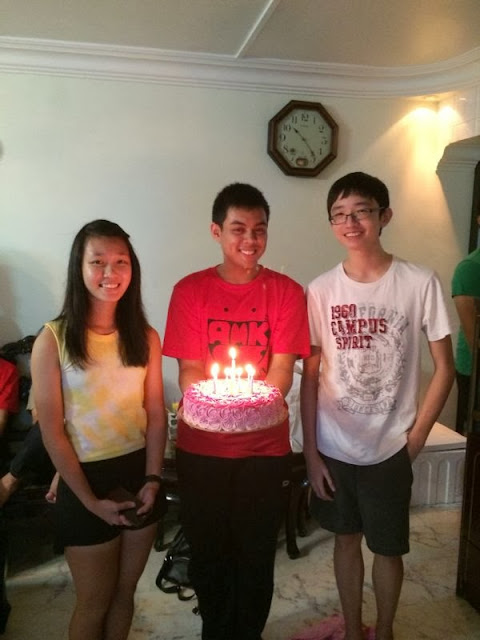 Wanted them to take photo with they cake, but since I am holding the cake… Hehe. Photobomb? 😛 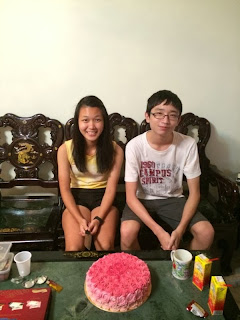 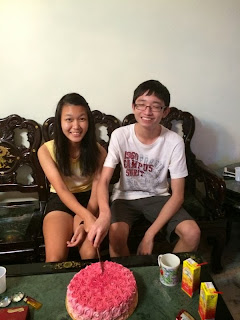 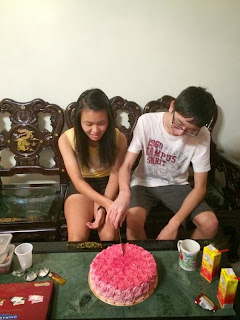 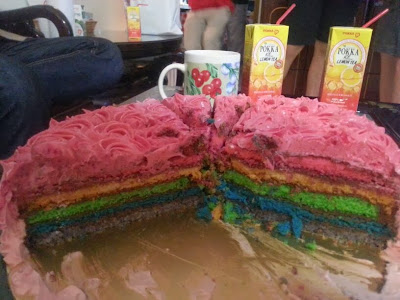 The interior of the rainbow cake! Looks really nice! It’s the first time most (if not, all) of us get to taste Rainbow Cake! 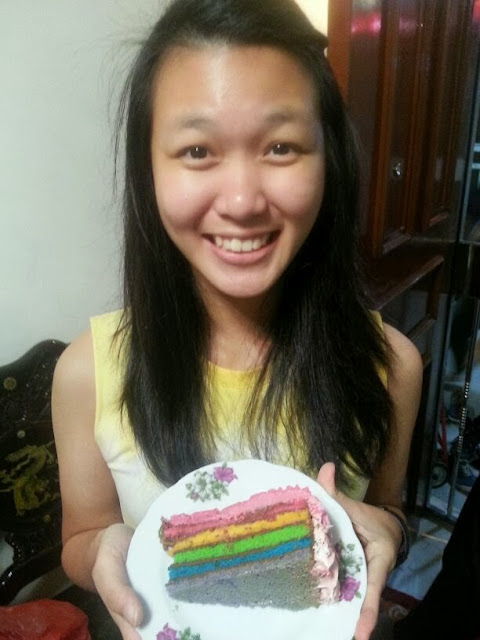 Qing and her cake! 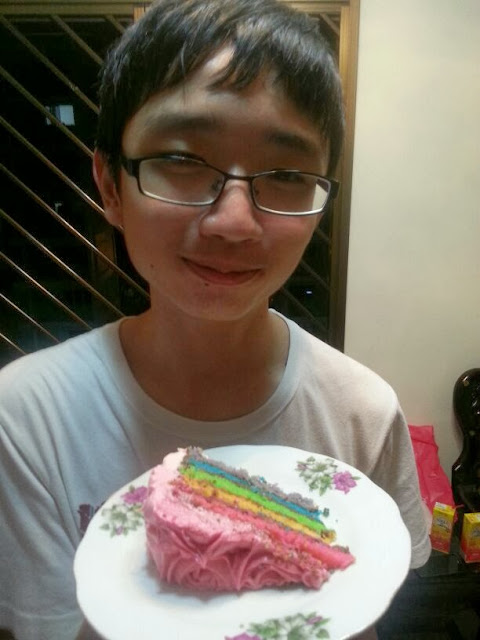 Lan Jiao Wei with his cake!
Well. I’ve got the cake from this, erm… should I called it a blogshop that sells cake? Ah well. Take a look at her instagram! 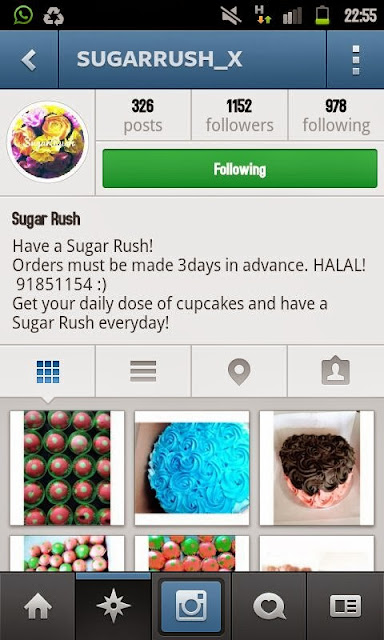 Yes. Her shop name is call Sugar Rush. She makes a lot of different kinds of cake! From cupcakes to 6’/8’/10′ round cake to even cake in the shape of cookie monster!  Go check out her instagram if you want to order really nice home-made cake for any event, be it birthday celebrations or any sorts of party! Feel free to contact her at 91851154 as she’s a really friendly lady.
Yes. If you guys are wandering what kind of cake I’ve ordered from her this time, it’s actually a 10″ Red Ombre Rosette Rainbow Cake. And it only cost me S$47. Brendan thought such cake cost around S$60++. See, affordable! If you have a really sweet tooth, don’t even think twice, order the cake from her to complete your entire celebration or event!
So after this, we had our Christmas gift exchange!!! It was really damn funny. Brendan was hoping not to kena the Ferrero Rocher, but in the end, he really got it. That was really kind of funny! There were still lots of funny parts but not gonna depict them one by one here.
And then, as they decided to open their gifts (er… I know some of the gifts were like unwrapped :P), I went into my room to carry all the 12 presents that I wanted to give to them. So much so that I’ve hug them out. Everyone was shocked. Didn’t expect I was that generous right? Actually, I am just learning from Peishan (my friend in SRJC). Yesh. All this gift thing started when she said she wanted to give me a Christmas present so… Since this is a season of giving, I might as well get some presents for my really close ones? So I ended up buying a lot of presents!
They seems touched by me.
Aww. I never fail to make them feel touch since they never fail to make me feel the same way.
Everything ended around 11+ pm and I suggested we take a group photo together since it’s really rare to get everyone together! (Although we took the group photo without Meiqi because she had to rush to the airport to send her brother) 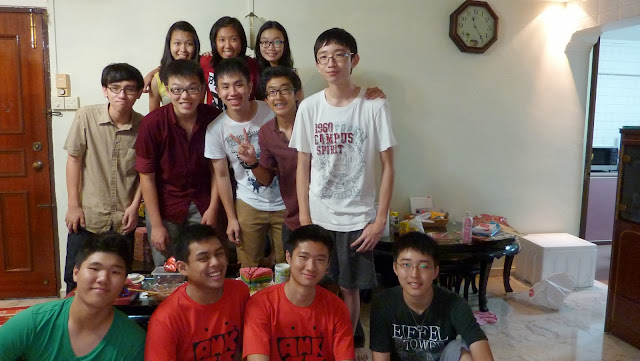 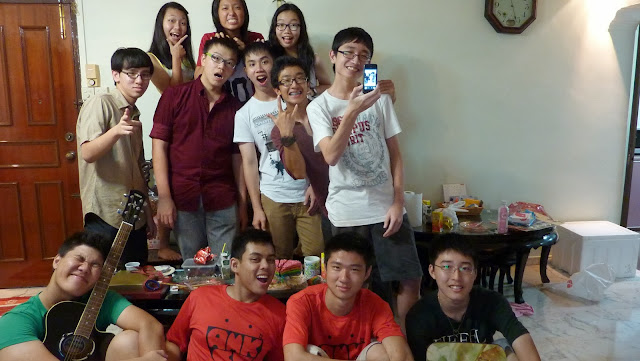 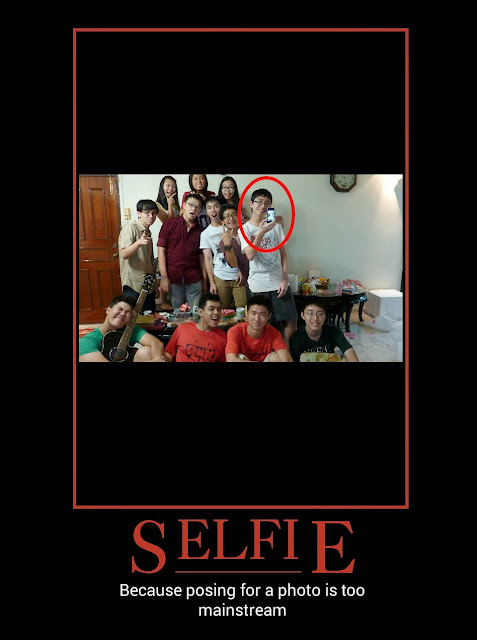 Did Junwei just tried to take a selfie in front of a camera, in front of a camera? Photoception well done. 😛
As everyone left, I must thank Adam, Junwei and Chen Yu for staying behind to help me clean up the mess!!! Couldn’t have done it fast without them!!!! 🙂
Overall, this is the best event that I’ve ever planned and organised to date!!! That calls for a celebration!