Muppets and the Atas Night Out 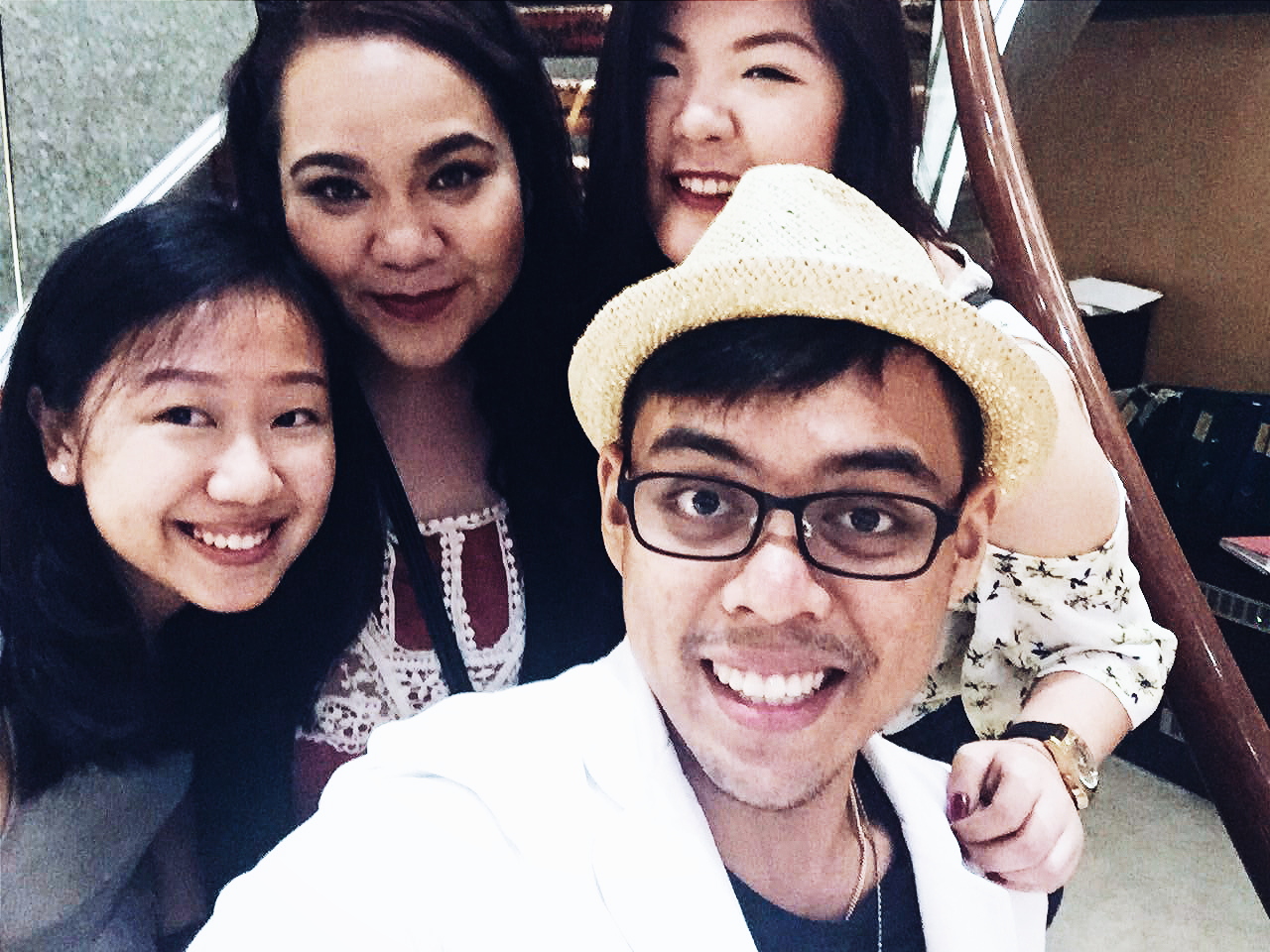 Holidays are ending for the Poly kids and the Uni kids just started with their holidays. It was probably a rather emotional night for Nic, Wanz and myself but an exact contrast of feelings in Ratna. I am unequivocally sure that Ratna felt so ecstatic because her exams just ended that very morning.

But then, we all have something to celebrate.

Celebrating our 3 years of friendship, which I can’t even conjure up how this friendship actually forms. (To be fair, I can’t even recall how all my friendship with my friends actually develops. I always thinks I am suffering from some sort of hypomnesia.)

Celebrating that we get rid of all the toxic people in our lifes. Some of us were really going through a rough and troubled period of our lifetime because of some fuckers that are as noxious as, if not worse than, the radioactive isotopes that were released during the Fukushima nuclear disasters. Of course some of us are lucky enough to not have met pernicious nincompoops, but still have our own individual struggles. At least when we encounter problems, we know who we can really count on.

Yea man. Look at the chat and you’ll know we are the people that are worthy to be friends (That’s one level of self-promoting).

We decided to have our dinner at this Coleman’s Cafe located within the premises of Peninsula.Excelsior Hotel. Thanks to Groupon, we managed to spend around S$27.50 each instead of the usual price at S$41.20. It’s at a discount of 33%! (Great deal to be honest) o/

We settled down almost instantly once we were there because we were all very hungry by then. It was already 6.30PM and we seems to be like some ravenous teenagers (and it’s a matter of months for us to enjoy the term ‘teens’ before we are being relinquished from that term). We initially wanted to get some plastic bags to tabao food home from there because since it’s buffet and free flow.

Of course, that’s what Ratna facetiously suggesting. We would be nuts if we were to do that. HAHAHA. But, we took something back home. Nicole’s gifts for us that she got all the way from England, Iceland and Sweden. No one could not not love her for the things she do for her close circle of friends. She even got me three bars of 70% cocoa chocolate (of different flavours) from London because I am thick-skinned and asked her to help me buy chocolate from overseas. <3 Love ya a lot muacks! HAHAHA

She also got us more chocolates and candies from the Nordic and a smooth rock from one of the beaches there.

And mine ‘package’ came in a Sephora bag. It’s quite interesting to see a guy walking down the downtown carrying a Sephora bag. But I did not mind it. Because I am carrying the love and thoughts from Nic.

Let us go back to the delicacies that were presented before us when everyone was back at the table after contemplating so hard on what to get for the first round. There were cereal prawns, which Wanz was agog with excitement upon seeing it, sushi, sashimi, salads, roast beef, braised oxtail, mini French pastries, shaved ice, waffles and many more. 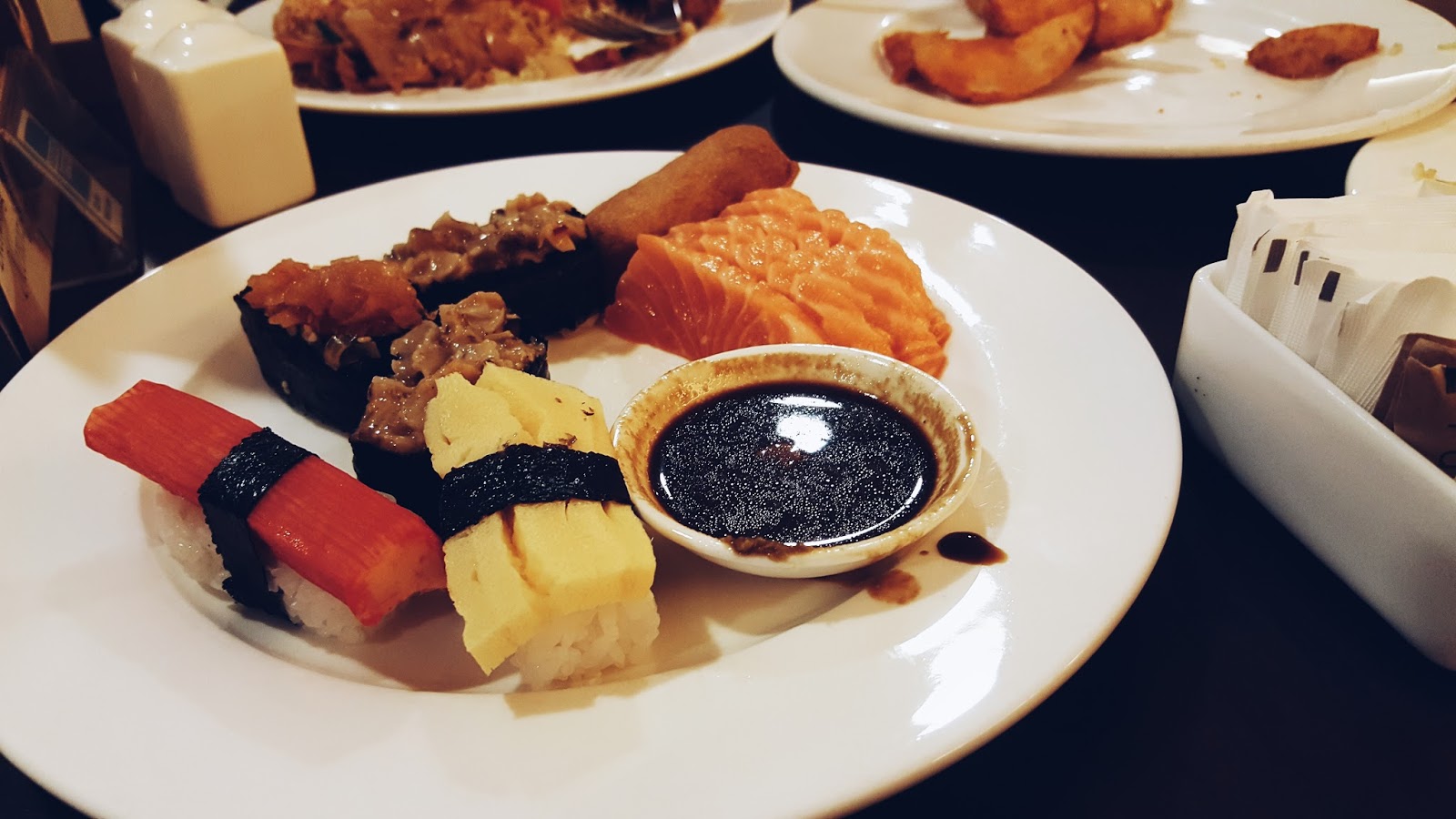 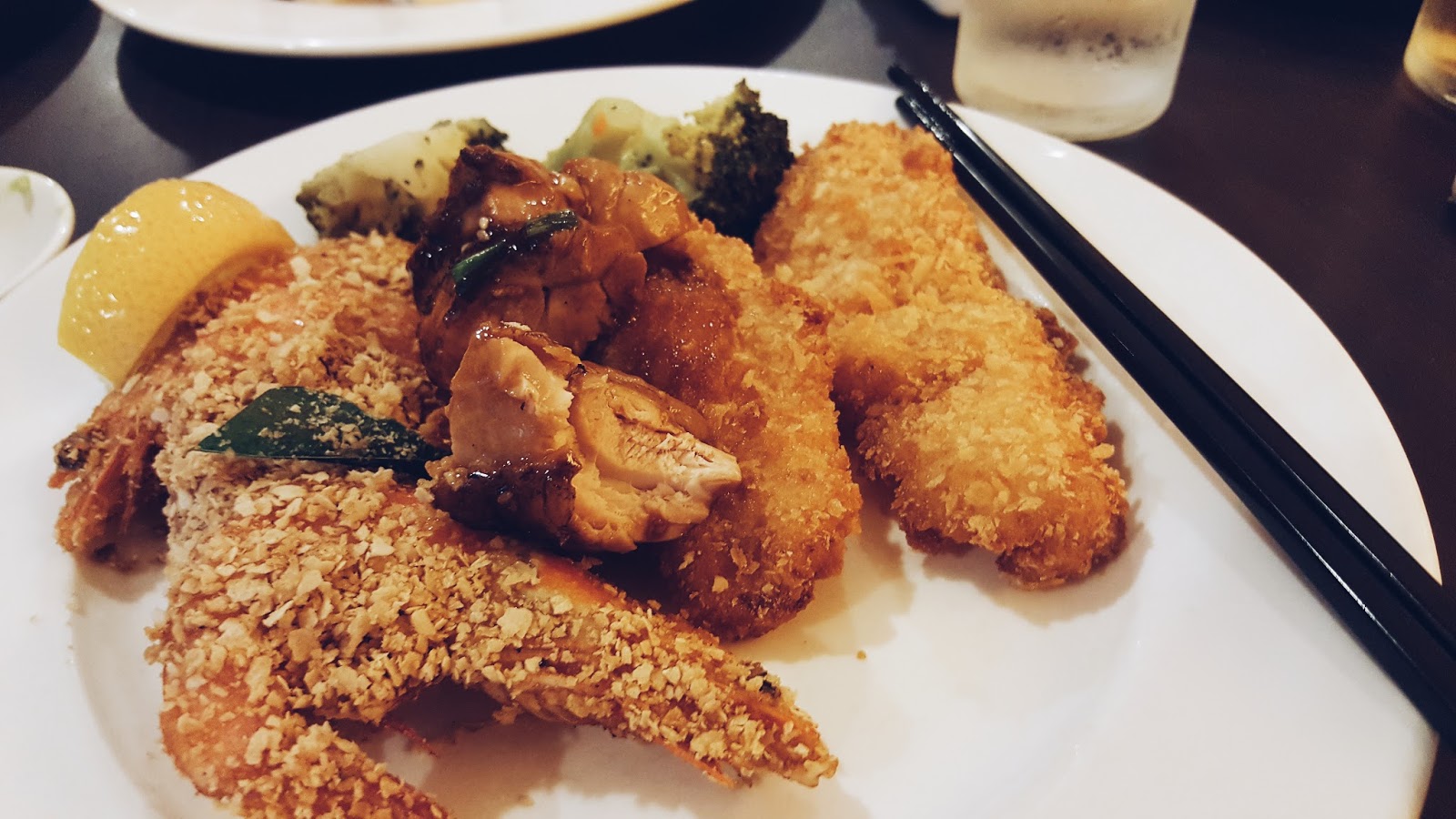 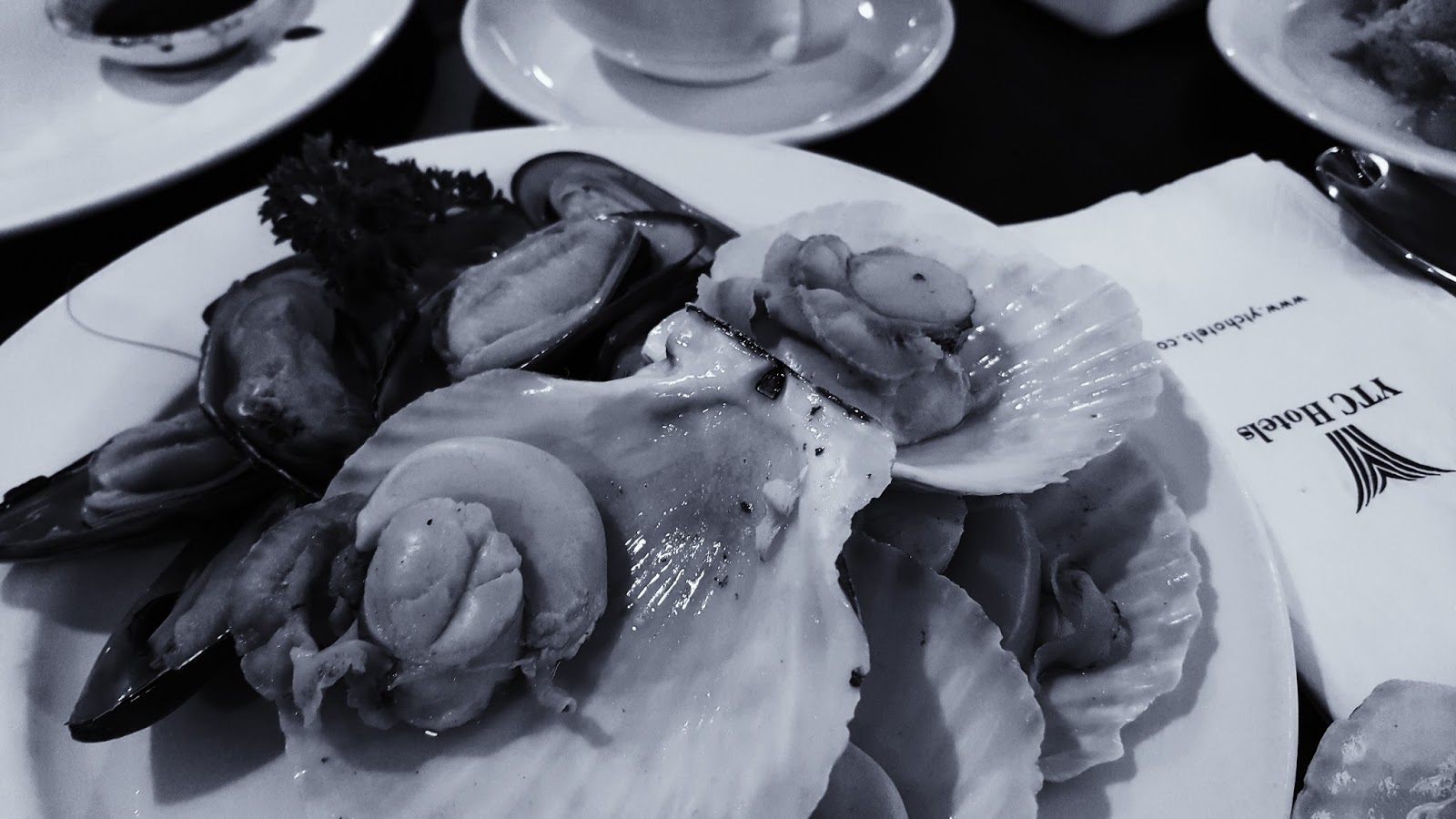 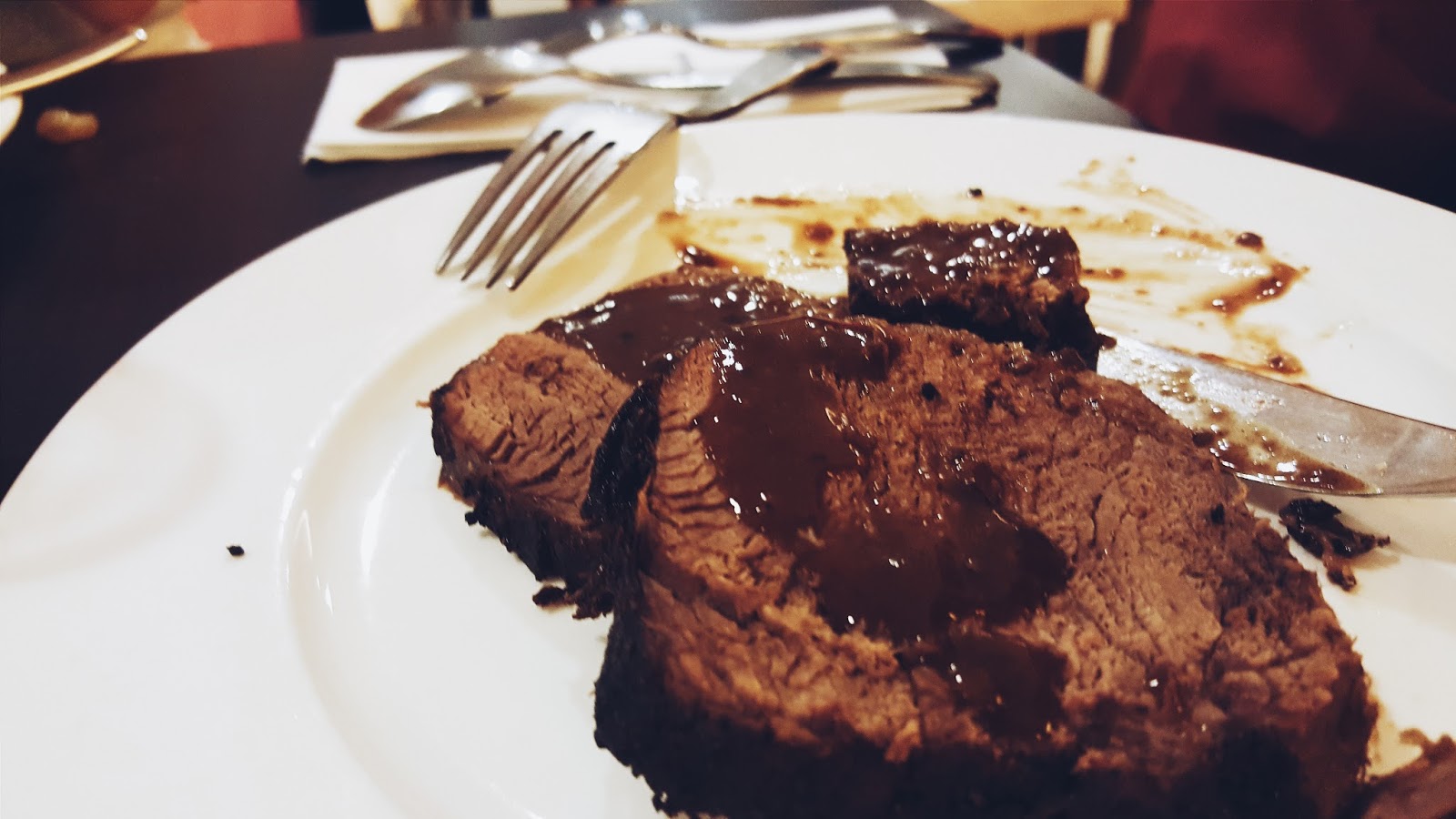 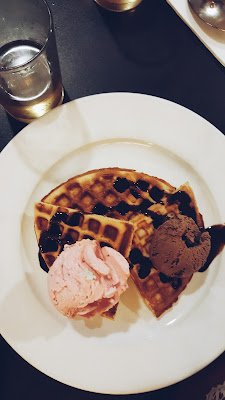 As usual, we discussed about our lifes and rant about it and also ranting on behalf of one another during the course of fine dining. 😀 Although sometimes we did actually acts like we ain’t inside a hotel. The food there is really not bad except of that faulty light bulb on top of us that flickered every now and then. But then again, we were too lazy to complain. HEHE.

We thought we could eat until 9.30PM but no, we were all rather full after 8.30PM. And since the girls wanted some alcohol, we headed down to Esplanade — to the venue where Wanz recommended to us. We wanted to go to Nic’s house since Ratna was staying over that night, but then we walked all the way from Coleman Street to Esplanade Drive — which we had to cross over the Padang that allowed me to reminisce about the National Day Parade (NDP) that I took part in last year. By the time we reached Esplanade, it’s already 9.30PM.

We got an outdoor seat and the menu was being served to us. I took a glimpse at the menu. I was immediately attracted to the ‘Party Shots’ section. 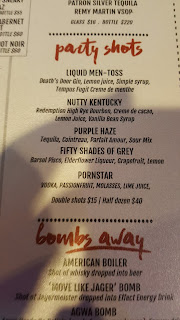 Ok let’s not even go there. 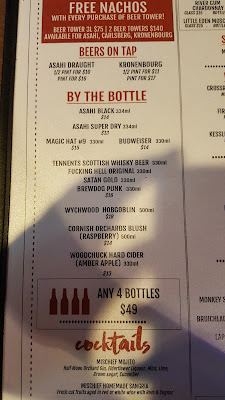 Since there’s an offer where ‘Any 4 Bottles costs $49’, we decided that since there were 4 of us, we should get them. As cheapskate as I am born to be, I chose the most expensive one. I mean, hey, make the offer worth it. After I ordered the Wychwood Hobgoblin, Wanz asked the waiter which bottle does he recommend.

Wanz: Which drink do you recommend. (Obviously this kid was indecisive as hell)
Waiter: Fucking Hell. (wtf is with that name)

I took a gasp.

Then I broke out into laughter.

She accepted his recommendation and Nic followed suit.

We ordered and it was quite soon enough that 2 bottles of Fucking Hell, a bottle of Hobglobin and a bottle of Woodchuck Hard Cider (Amber Apple) appeared on our table. 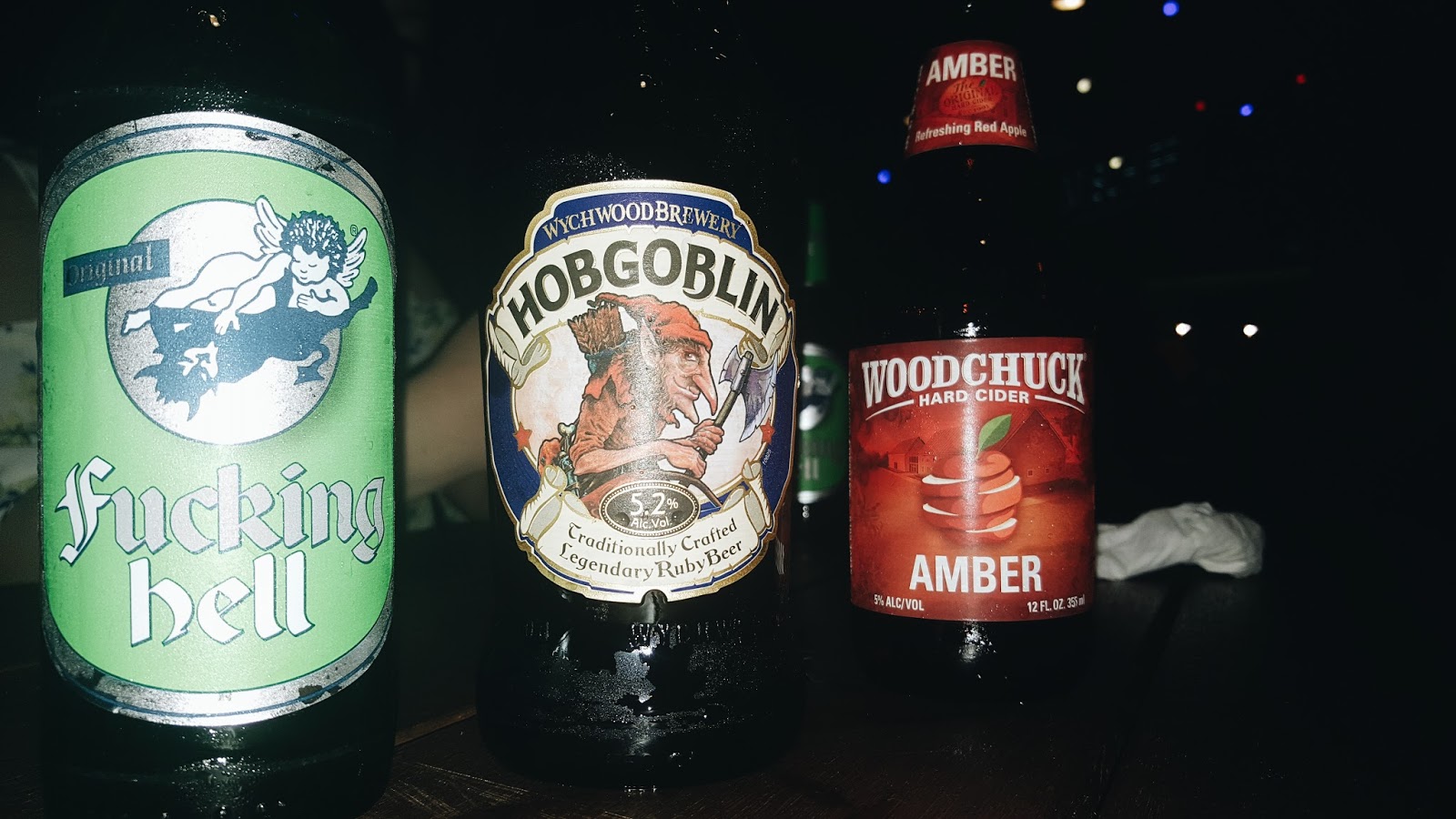 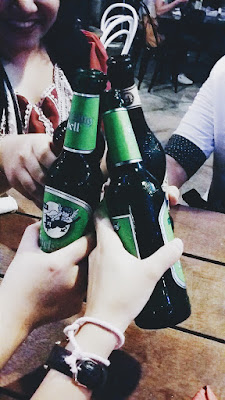 We toasted and wished that our lifes are free from toxic people and to be happier. HAHAHA. While we were drinking, the girls wanted to recreate the photos that they took 3 years ago in SR. 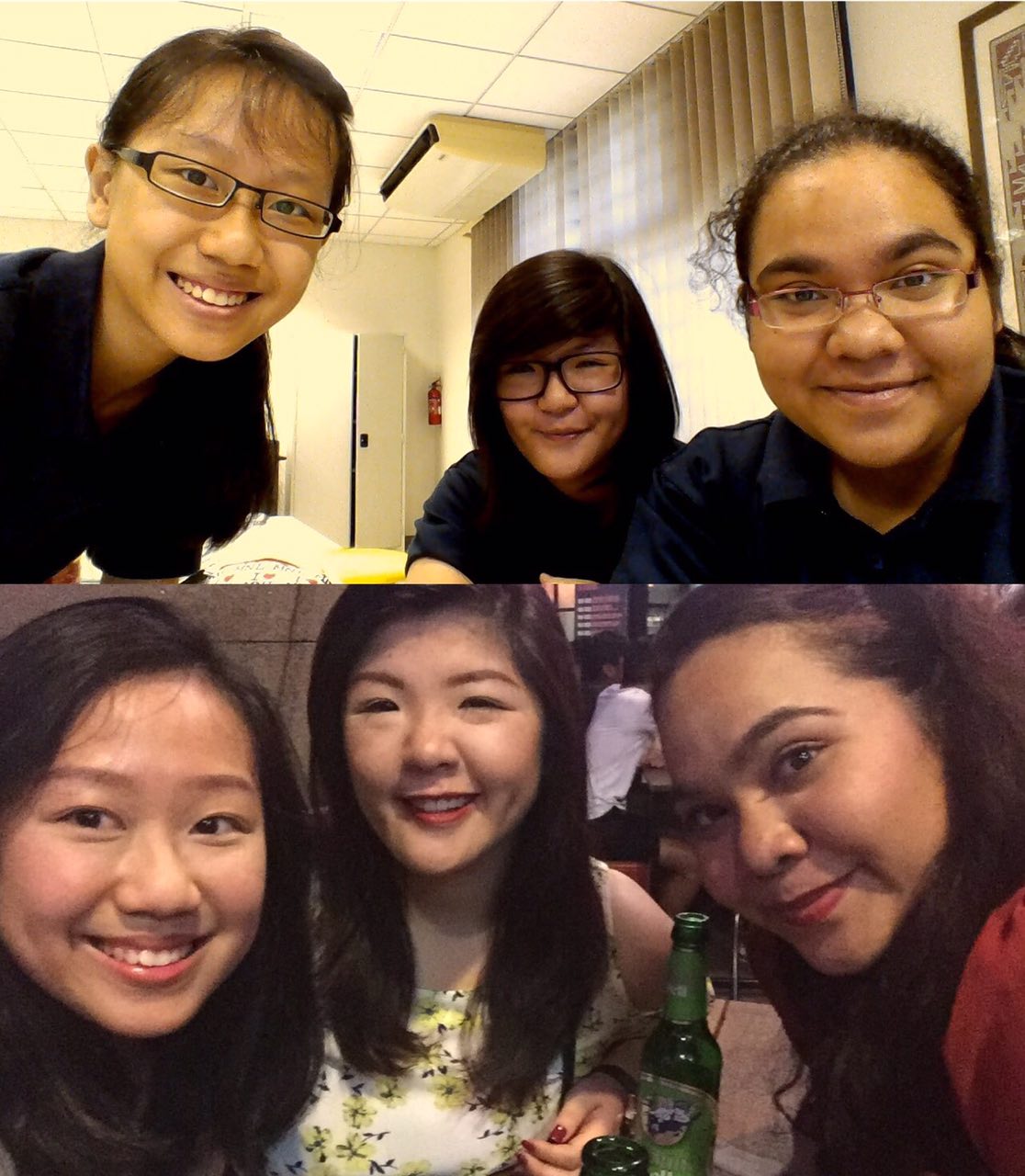 DAMN. They grew up well. I am tearing up while trying to figure out how a grotesque guy like me are fortunate enough to be friends with 3 gorgeous ladies. I really wonder what makes me so fortuitous.

We continued to chat until it’s late enough for us to go home.

I shall end off this post with a series of selfies that I’d taken with the girls. 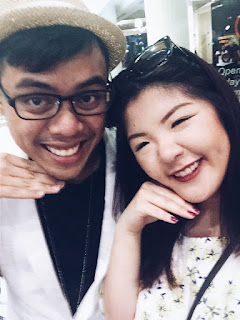 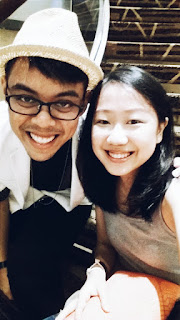 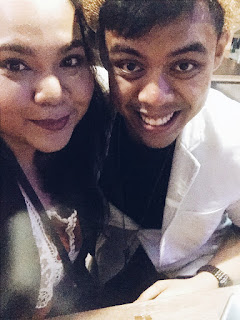