Finally saw the photos the organiser took during the audition, and so I decided to do a post about it. 😀 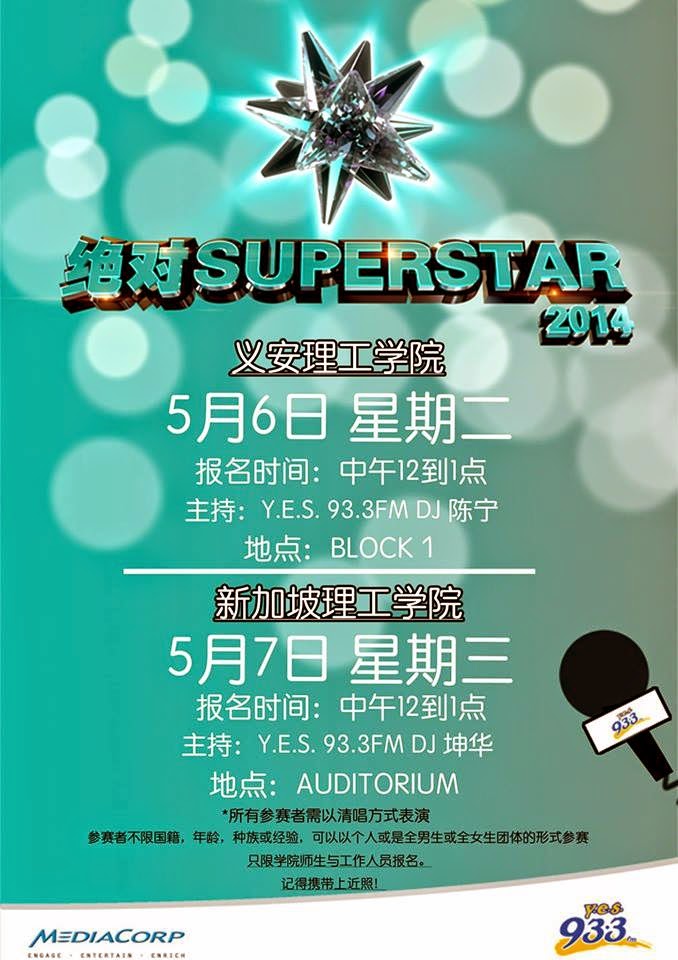 The poster for the Project Superstar 2014 Campus audition!
So after 8 years, yep 8 long years, Project Superstar is finally back! And it coincides with my first year in Polytechnic! Woohoo! Well, I think everything in life is destined. I mean, if Project Superstar returned last year, I wouldn’t be able to join (I would be so busy and stressed with my JC work that I don’t even feel like heading down to any public auditions). But since it’s here this year and that it is at the doorstep (uh-huh, audition for NP students in NP lehhh), why not give it a try?
Initially, we were not able to take part in the audition.
1) Originally, my class was supposed to have a field trip to Red Dot Museum on that very day and the timing clashes. We tried to persuade our Design & Publication teacher, Ms Liaw to let us off for the audition. Coming up with relatively interesting persuasions. And she initially rejected our persuasion but then few days later, she announced to us that our field trip is postponed. o/
2) Thn on that day, 6th May, we realised that we need our own photographs to the audition. Those who wanted to join had no photos (at first we thought we need one picture of close-up shot and a picture of full body), but then we tried to crash the audition. And thn Jonathan sent us a message (he was there early) that WE NEED THE PHOTOS IN ORDER TO TAKE PART. So I suggested that if we can’t join, we just go KTV after that. 😛
But when Meihong and I reached, Jonathan and I went to ask the organiser if we really need the photos. Thn they said need. Thn I took out my passport size photo from my wallet and asked if that is acceptable. To my delight, they say can. Thn we decided that those without photos, just take a photo with a phone and thn go somewhere to print. Zeliang, who was waiting at Clementi (cos he thought we confirm cannot join and thought we confirm going KTV), was called down to NP to take photo and print it out so he could also join.
So eventually, the 4 of us managed to get into the audition.
I was the first to go up, followed by Jonathan, thn Zeliang and afterwards would be Meihong.
Meanwhile… 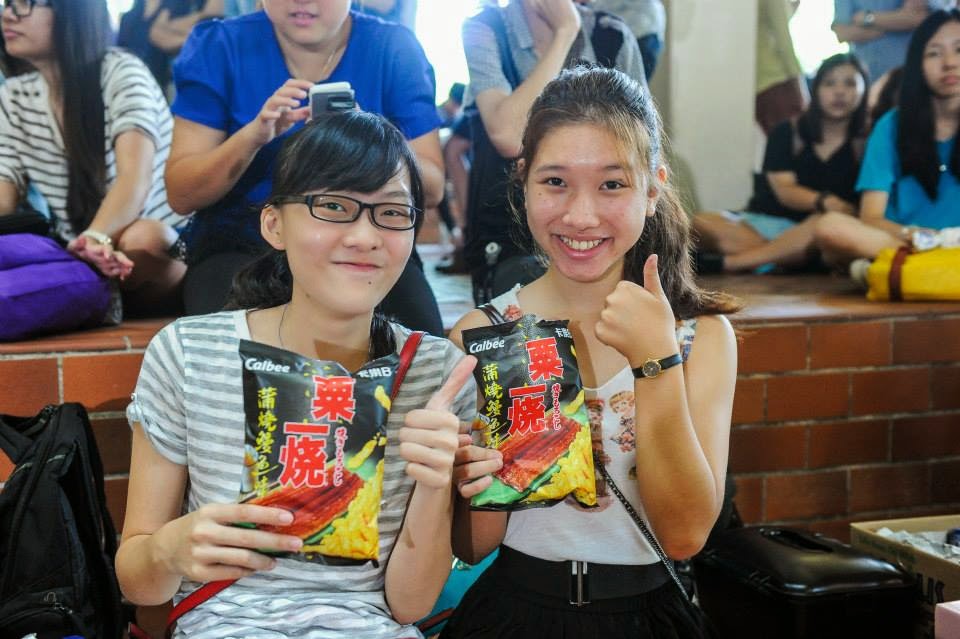 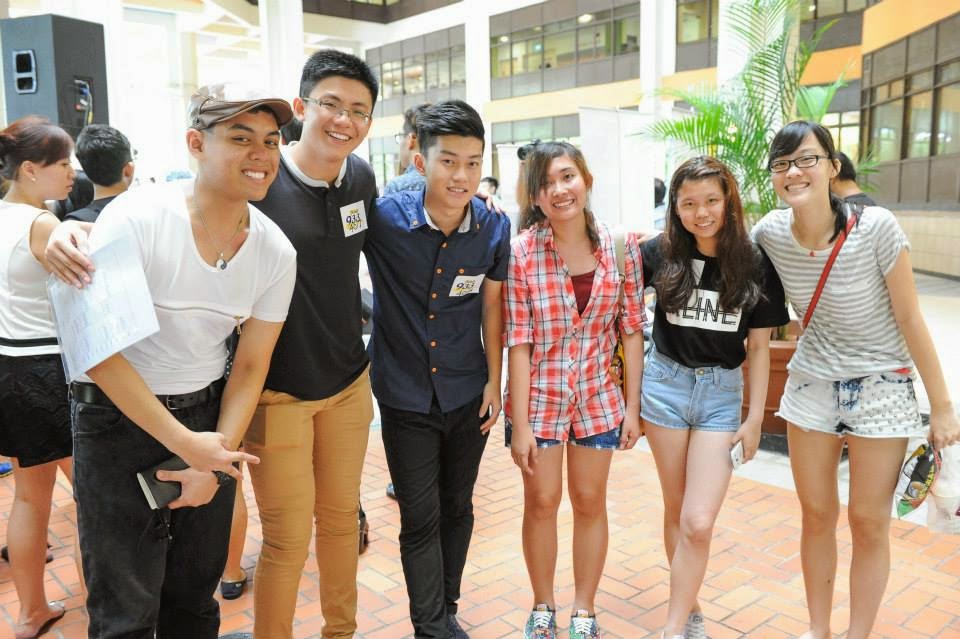 (Image: Project Superstar’s Official Facebook) The organisers decided to help us take a group photo, without Dallies, because we didn’t know where were she.
From left: me, Jonathan, Zeliang, Jingwen, Meihong, Crystal.
Ignoring the part which I was interviewed and I dragged the other guys down with me. If next time the interview is shown on YouTube or TV, I will blog about it then (haha, which means, I don’t think will be shown lorh).
When it was my turn, the organiser told us, the three guys, to go on stage together. 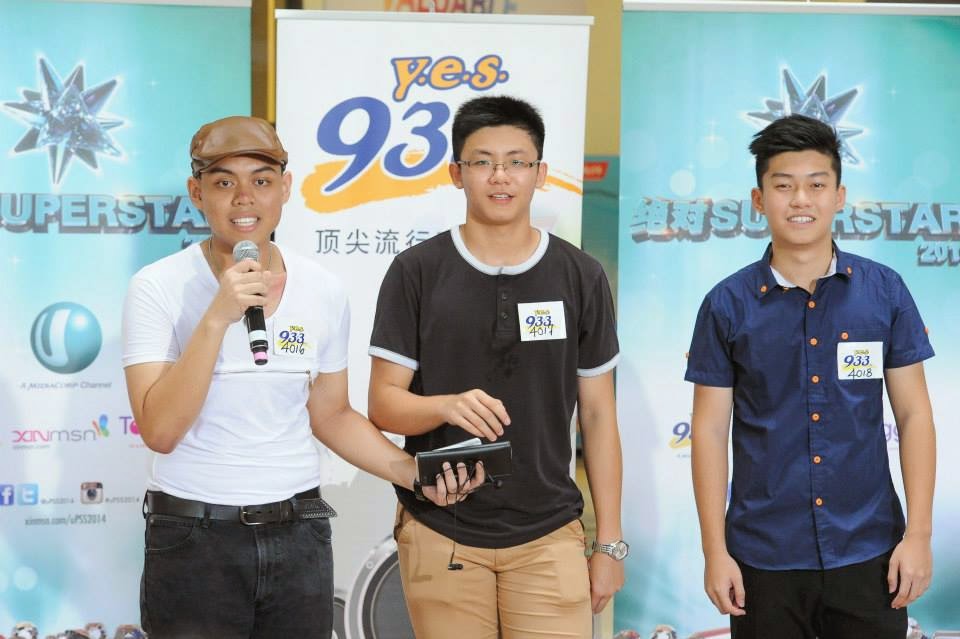 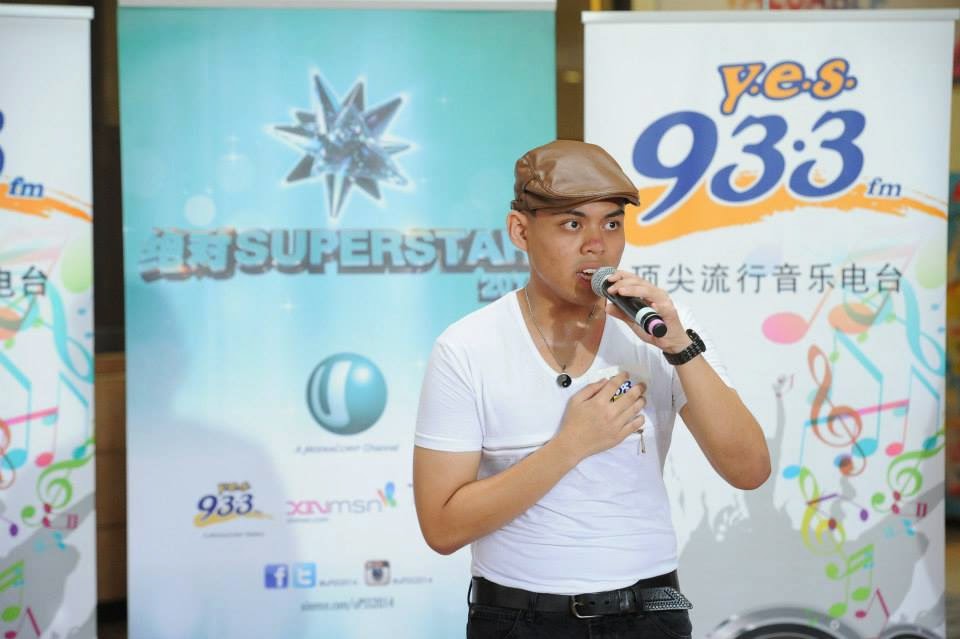 (Image: Project Superstar’s Official Facebook) I admit I was very nervous that I failed to perform to my optimal standard (which is probably when I am in the bathroom). I totally forgot about needing to drag the ending a bit when singing my《昨夜星辰》.
After the three of us had sang, the judges gave us the comment that I could still remember:

So we took up their suggestion, went out to prepare ourselves. We decided on singing 《你是我的眼》. We seems fine during a short rehearsal but we were rather chaotic on stage. Firstly, because I was so nervous that I nearly forgotten what I were supposed to do. And secondly, all of us wasn’t really sure of the lyrics (I mean, it was a last minute thing). 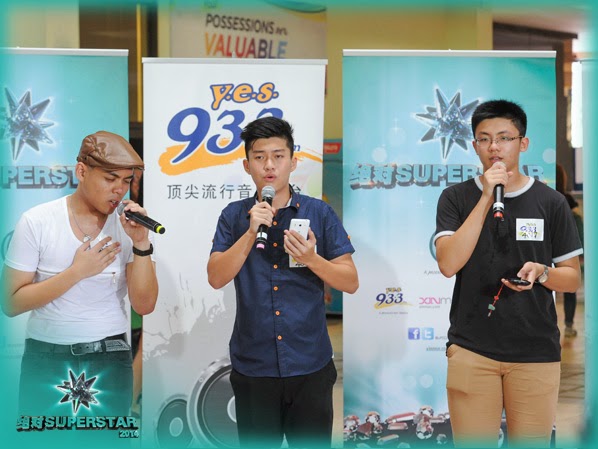 When it’s time to see if we are in or out, the moment was indescribable. The moment when you feel like seeing more greens than reds, not because you want to proceed to the next round but want people to acknowledge your singing skills. However, you also admit that your singing wasn’t really good and that your coordination was relatively poor.

And as I raised my head, it was all RED.

Disappointed, we thanked the judges and walked off. Although Jon and I were just merely there to just get the experience and to crash the audition for fun, I must admit it wasn’t really good to see 3 reds for our singing.

WE WERE CALLED BACK ONTO STAGE.

This time, one of the judges told us that THEY ARE GOING TO JUDGE US AS A GROUP THIS TIME.

We took a deep breathe, and I stared down and thought to myself, “MAYBE STILL GOT CHANCE UH.”

The moment I looked up again, this time, IT WAS ALL GREEN!!!!

Everyone was ecstatic, especially the girls outside… 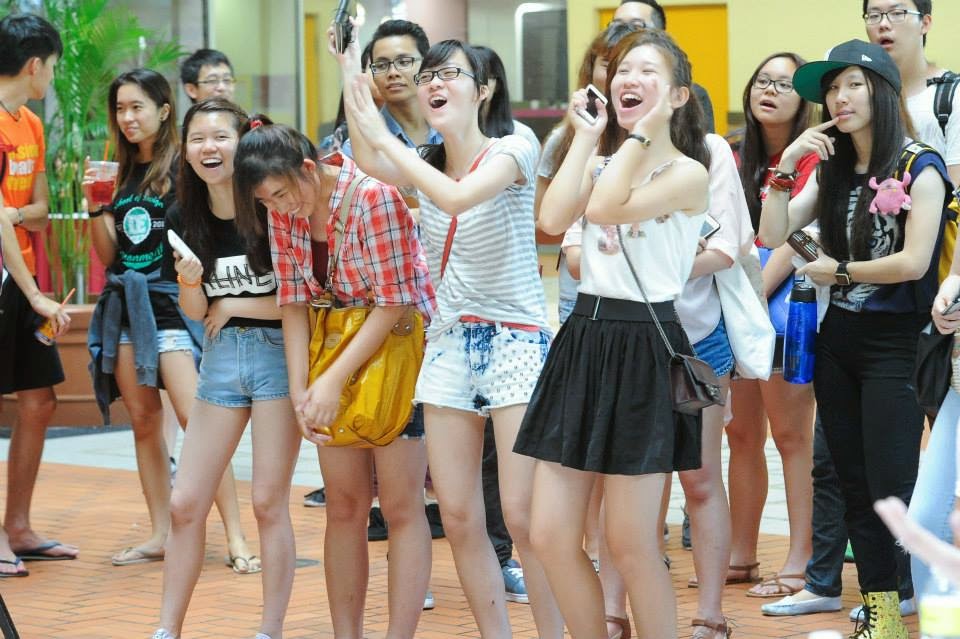 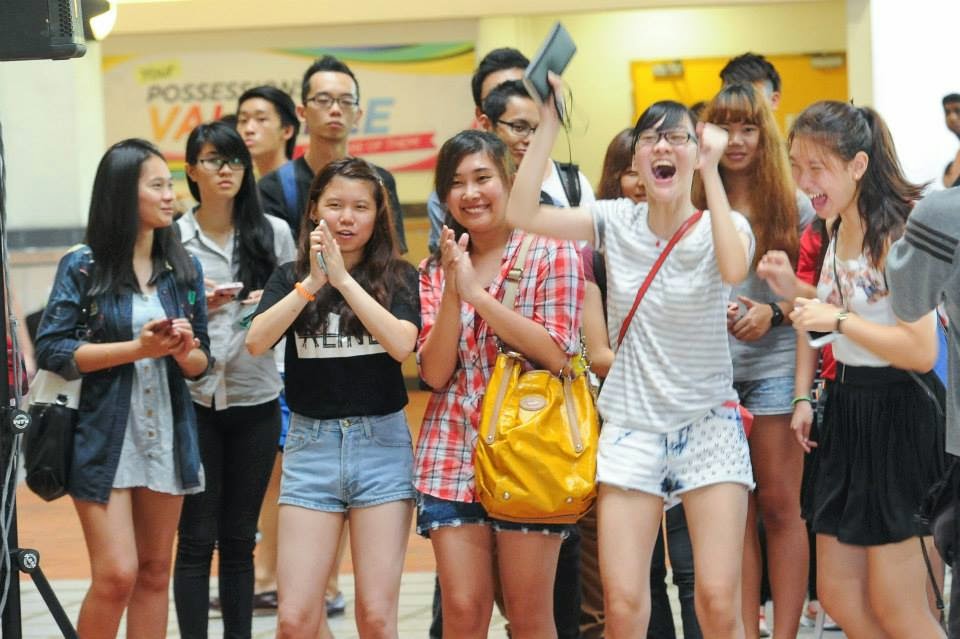 (Image: Project Superstar’s Official Facebook)
So after confirming our places in the next round, we went through a series of on-screen interviews (This is when I realised how difficult an interview is, even if you are the one being interviewed).

We are definitely happy to proceed, but… 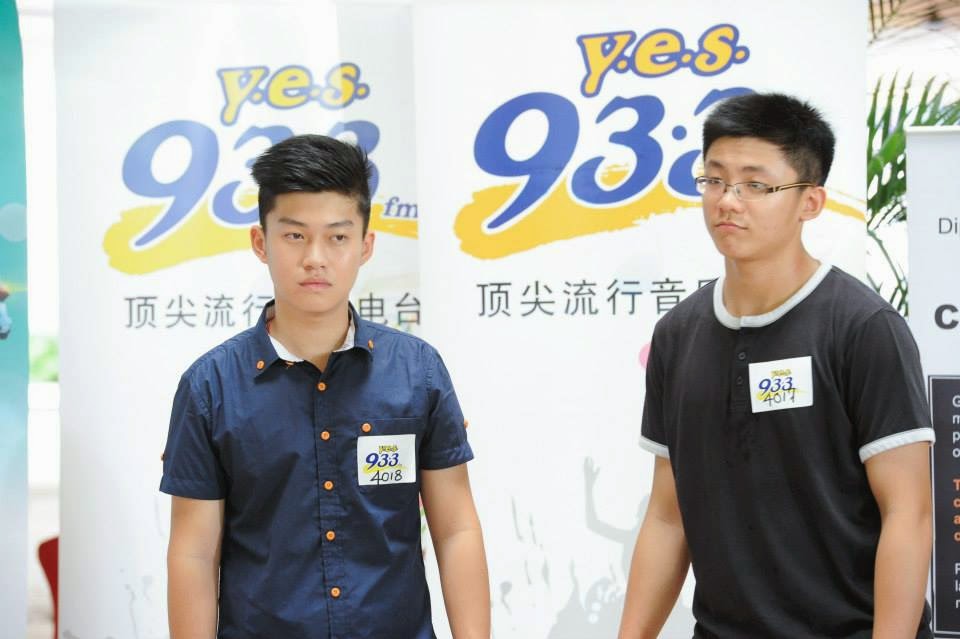 (Image: Project Superstar’s Official Facebook)
WHAT ARE WE SUPPOSED TO PERFORM NEXT? CAN WE BEAT THE REST IN THE NEXT ROUND OF AUDITION?
P.S.: For those who wants to come down to support us on the next round of audition, it will be held on 21 June (Saturday). I will blog about the further details once we are informed!