The Reunion & the Gatecrashers 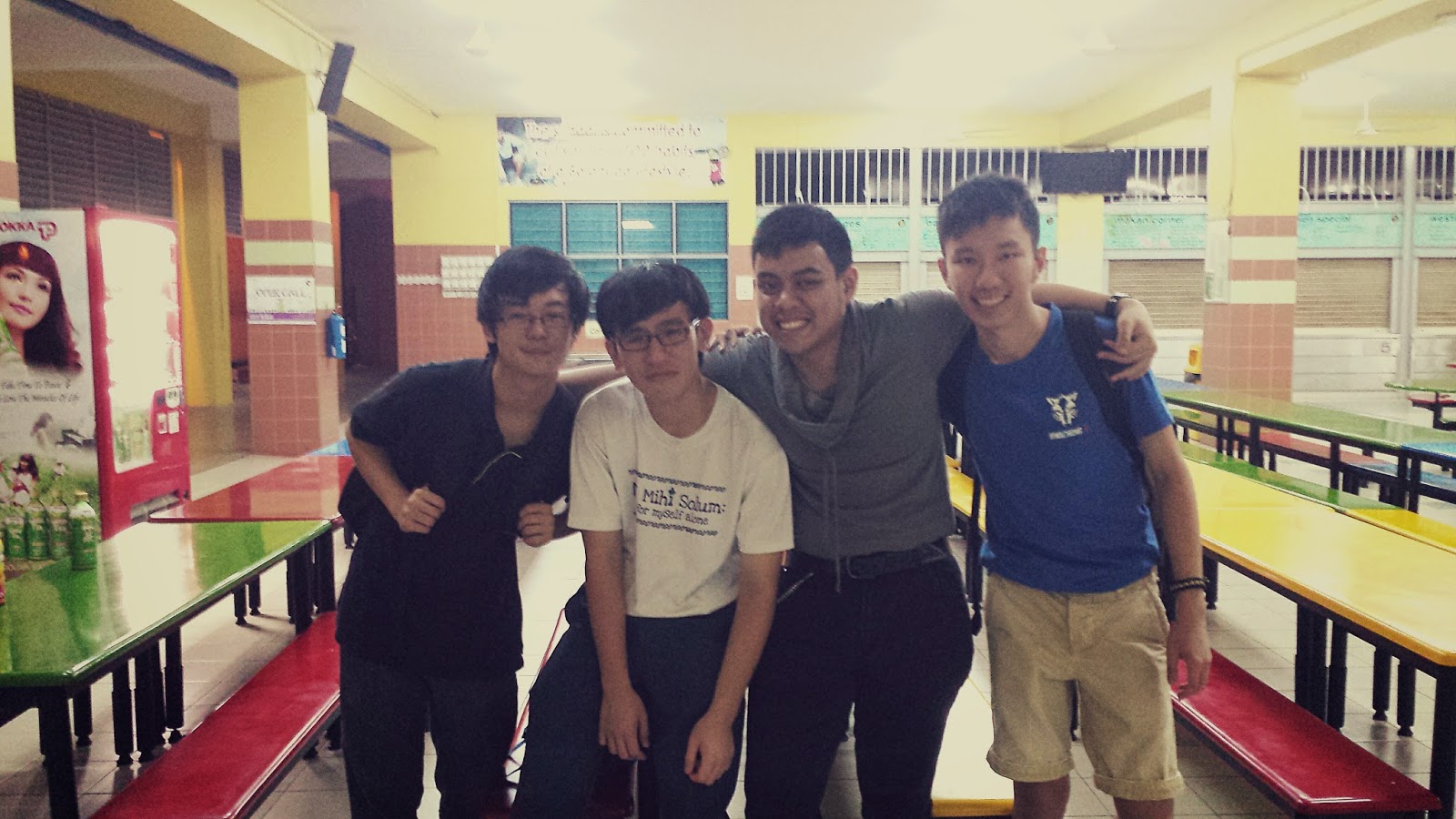 So the picture above summarises what I want to say for this post. The AMKsians of the 2012 batch reunited in AMKSS after 2 years! This picture features a Jazz Band performer and 3 gatecrashers. (PS: I am definitely not doing some sort of description you will hearing during English Oral examination. Although I sounded like one specific student who is unsure of what on earth he wants to convey to his examiners. Am I that bad?)

28 March 2014 can be mark down as one of the more memorable day in my life. It’s a day full of reunion. Let’s not talk about what happened in the morning because I was just slacking my ass off. The day before, the Drama Club seniors were persuaded by the juniors to return for session because it was the last day of Drama for the current batch of Sec 4s.

Time passes by really fast, doesn’t it? I could remember these batch of Sec 4s Drama kids joined the CCA when my batch was in Sec 3. I remembered how difficult it was to persuade them to join Drama (Er… Not sure how we managed to rope in three guys into the gang). And so… Their first Drama session started while we were all busy preparing for the Singapore Youth Festival (SYF) Central Judging (Yes, it was still called ‘Central Judging’ back then. And that was my last ever SYF performance.)

They were so innocent back then and I was still unsure of how to interact with them because of that 2 years age gap. I wasn’t that confident because I never make any close friends out of the Sec 2s back then. Look how I am using my words, BACK THEN. (So that those closer to me now will never get offended. You see how important it is to foster human-to-human relations.)

The phrase ‘Back Then’ has many, or at least, a few meanings.

‘Back then’ can mean that things that one is mentioning has changed. For example, “Back then, the Sec 1s are really innocent.”

‘Back then’ can also mean, at the same time, that the thing that one is mentioning hasn’t changed at all. For example, “The Bomohs couldn’t find the missing airplanes back then, and still couldn’t locate it till now.”

My English is never accurate.

Let’s get back to topic before I start drifting away and don’t even know how to make a U-turn.

I had made it very clear from the start, I will only go if either Kai Hao or Hong Kiat go. And too bad, one supposed to have meeting and the other had CCA in the afternoon. Well, I decided to call for a dinner outing with the juniors and the senior batches.

So on Friday evening, I met up with Hong Kiat at Ang Mo Kio MRT Station because he came down from Anderson JC. Eh-hem. I was supposed to meet Kaihao earlier at 3plus PM because someone said his meeting was cancelled.

And then, he decided to stay in school.

And so, I decided to take a nap.

I thought I was late because we were suppose to meet at 5PM. But then my body decided to sweat like there is no tomorrow and I had to air myself dry before heading out. 5.30PM, I was still at home and Kaihao’s still at Botanic Gardens. Woah. I swear we are those kind of people who can’t be on time for meet-ups. :’D

After meeting Hong Kiat, we were supposed to wait outside Breadtalk for the juniors and Kaihao while Lizhong was making his way down from Hougang. It was then I received a message, from Tan Ting saying that they will reach around 6.30PM. Hong Kiat and I looked at each other, stunned. What are we supposed to do for the next one hour?

But luckily, Kaihao came while the rest reached around 6pm. Phew.

The three seniors met their juniors for the very first time since 2013, and some for the first time. Audrey and Tan Ting were the two whom we know. And then there’s a Minh Quang and Emily, in which we didn’t get to meet before this.

The meeting with the three girls were rather short because they had to go and not staying long enough for dinner. So little Minh Quang was left alone with us. And there came Lizhong.

After dinner, the old ones wanted to go back to AMKSS campus to gatecrash the alumni-organised gathering.

Yes. This one. Where many of my friends (actually almost all) decided not to go because of the $25 price tag (originally $50).

After so much hesitation and ‘loitering’ outside the school campus, the four of us finally had some balls and walked into the school. 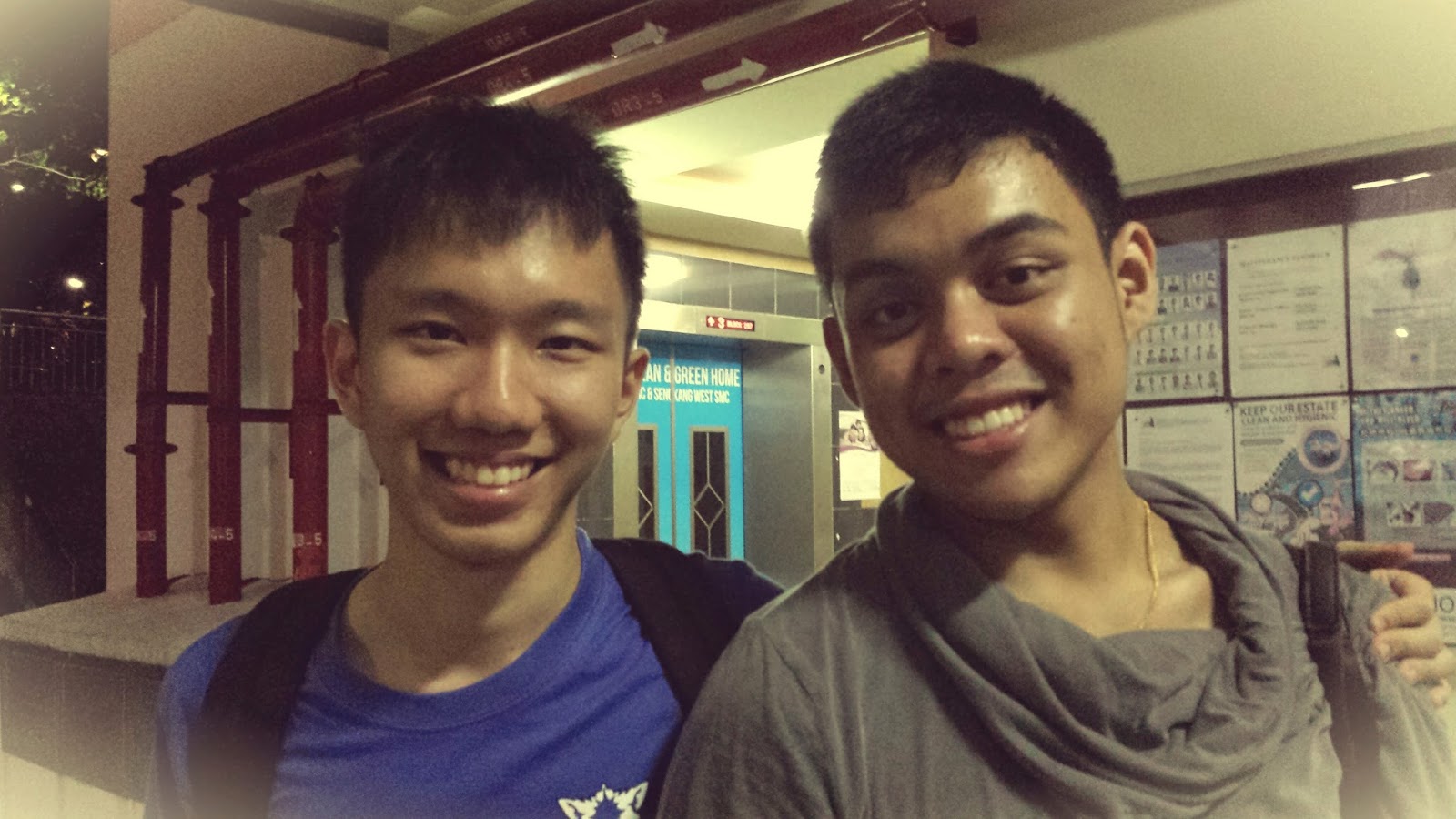 A photo taken while we were hesitating whether to gatecrash the Alumni Gathering or not.

The security guards let us in because we said we were there to see the teachers. Which is as true as it can be.

Finally got to meet a few teachers and chatted with them. Woah. The memories. The event was really very grand, and seems fun. Maybe next year’s alunmi gathering, I should persuade everyone to go, despite the amount of money. I mean, the most important thing is to enjoy the time and reunion with your beloved teachers and friends.

At the end of the event, Hong Kiat, Kaihao and I stayed behind to play Monopoly Deal. 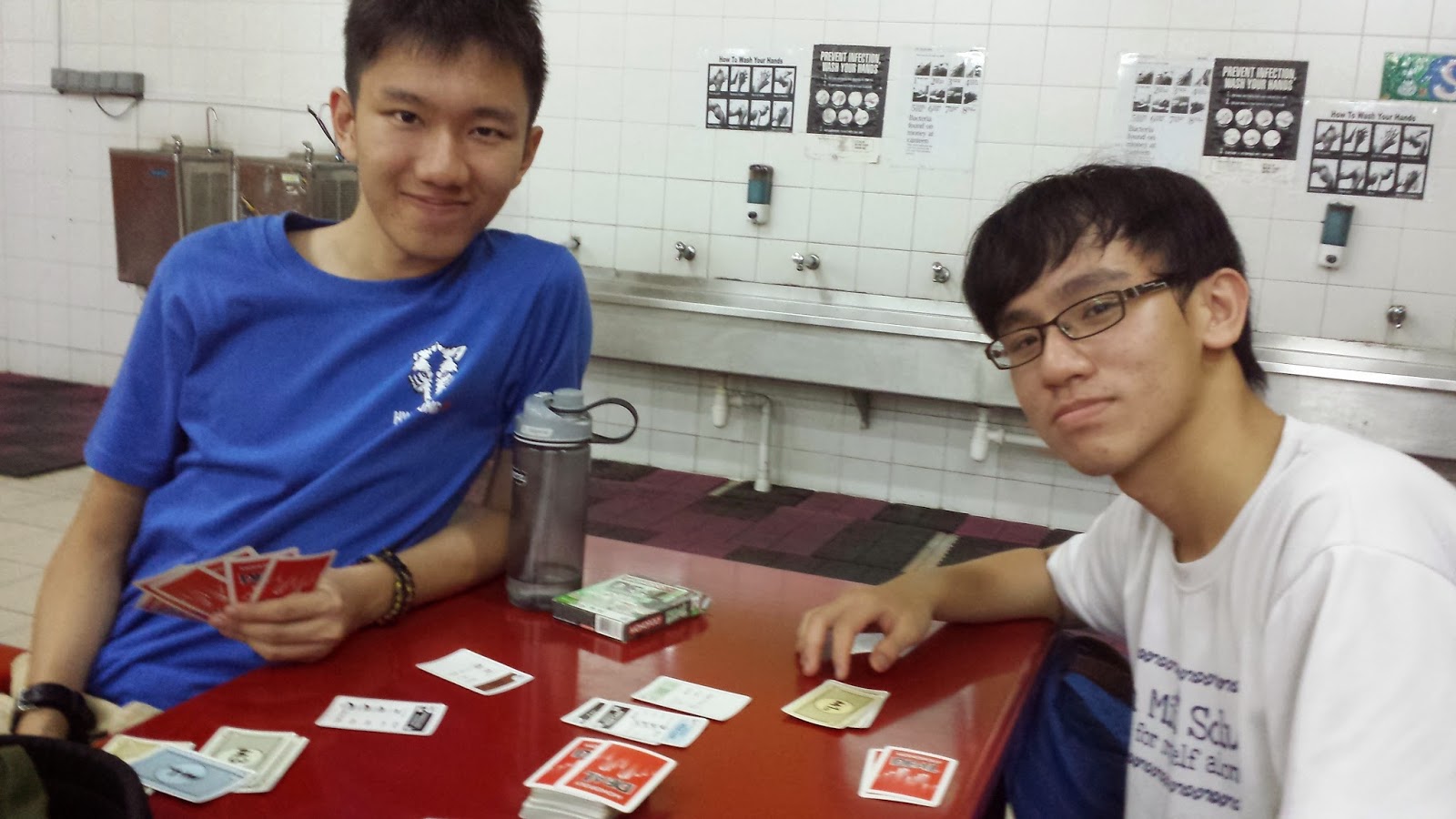 Kai Hao with his pedo-face. 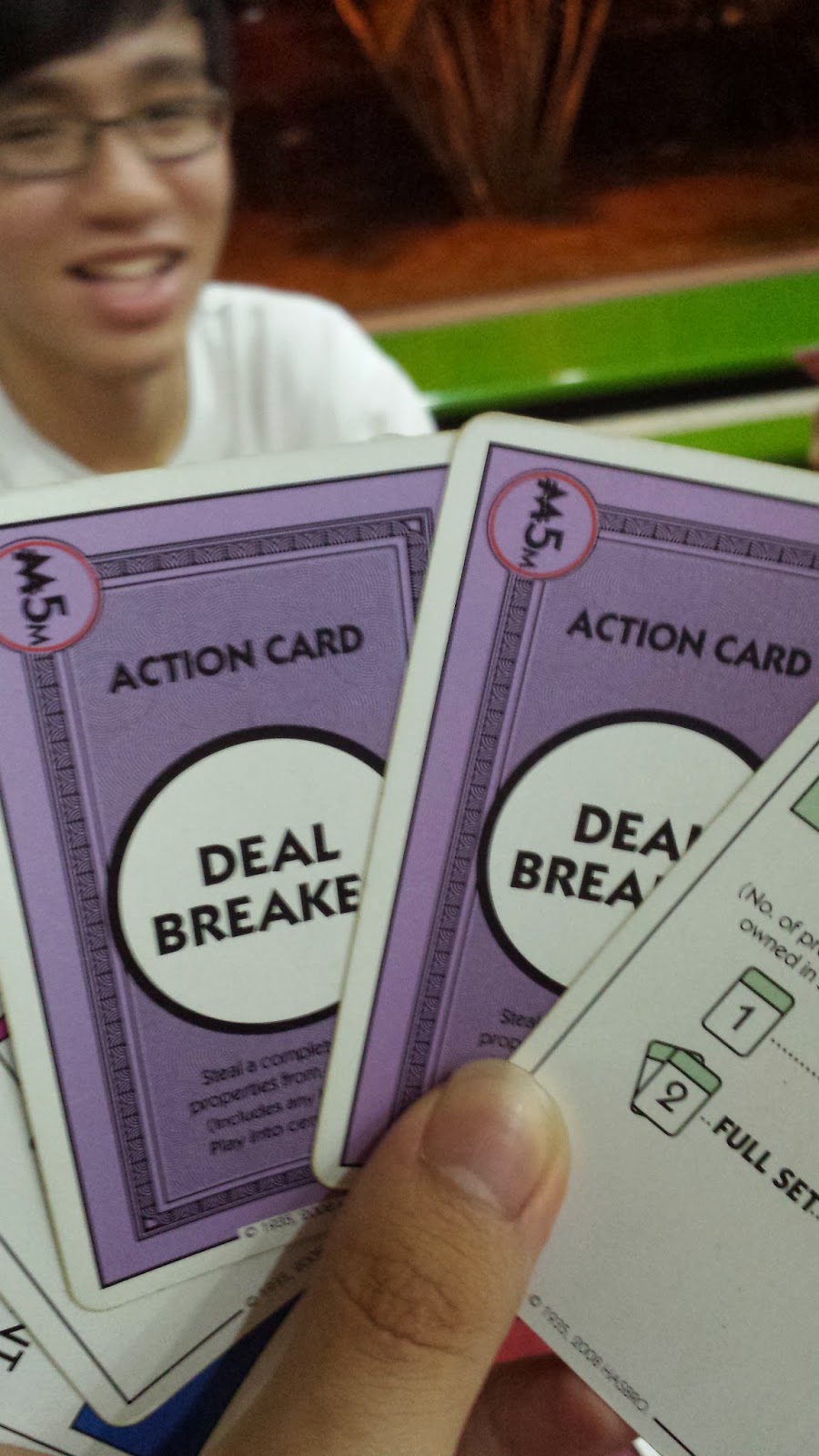 And he wants to show the world he had 2 Deal Breakers. Oh. Wow. :’D
And what’s a gathering without a selfie? (I am really a selfie addict) 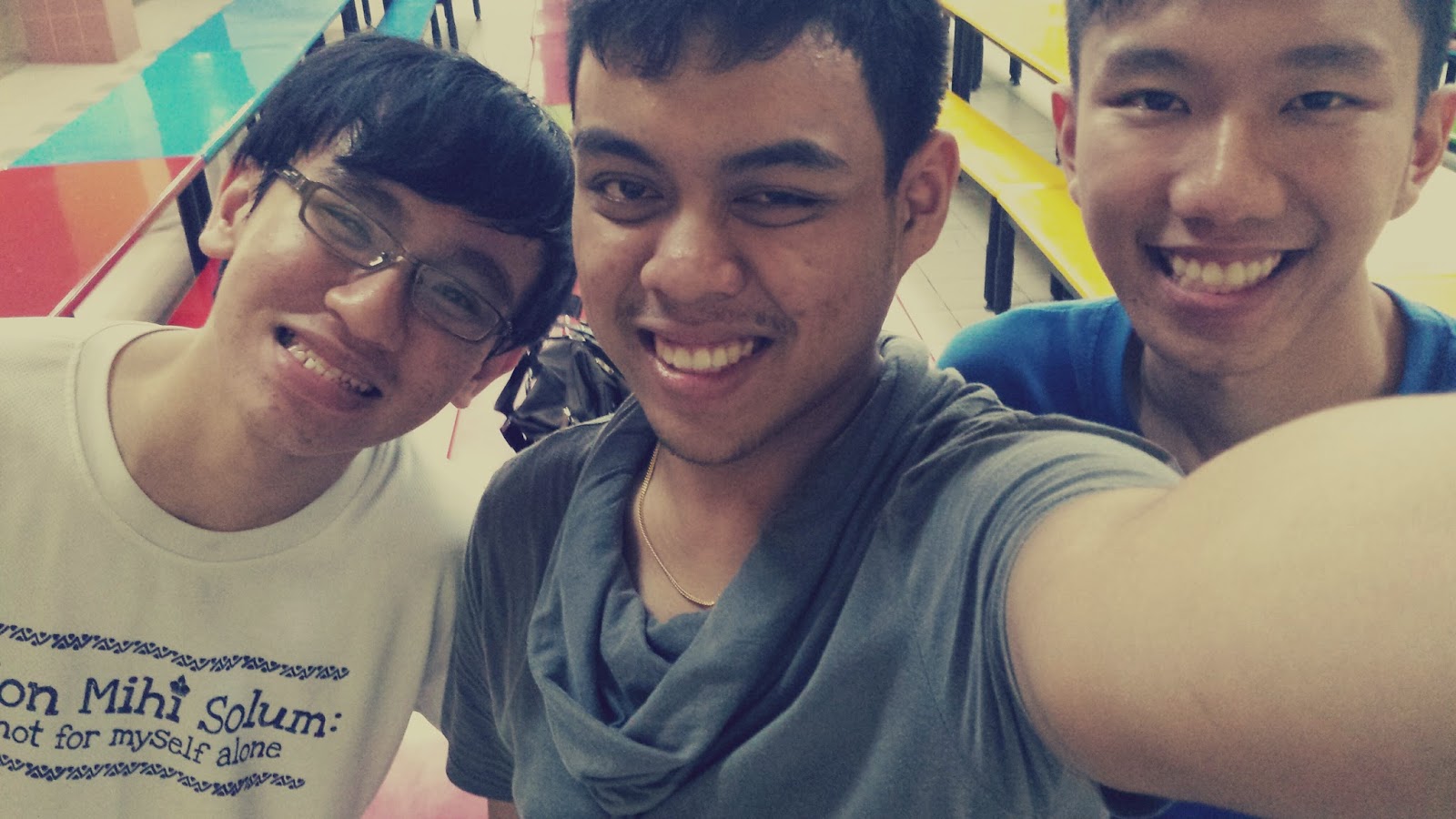 From left: Hong Kiat, me, Kai Hao.
While we were trying hard to take a proper photo, Justin Chong and some of his jazz band friends walked pass. And so… we made use of this chance to call someone whom we know of to aid us. 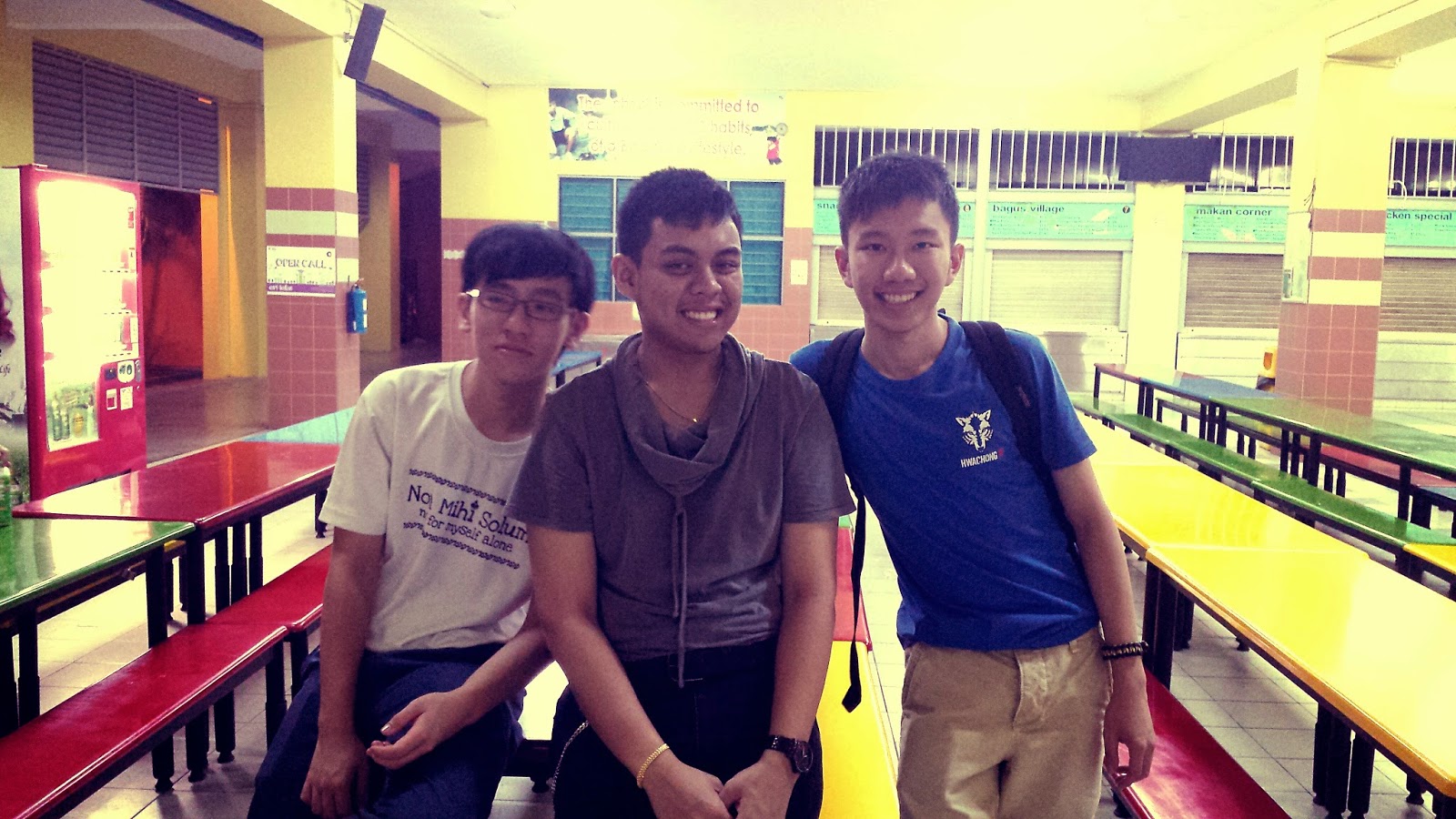 Thanks to Justin, a proper photo was being taken!
And how could we forget about adding Justin into the picture? It has been a long time since I’d last seen him! (And that goes all the way to the picture right at the start of this post). Credit to Andrew Tan for helping us to take the second photo!
Wonderful.