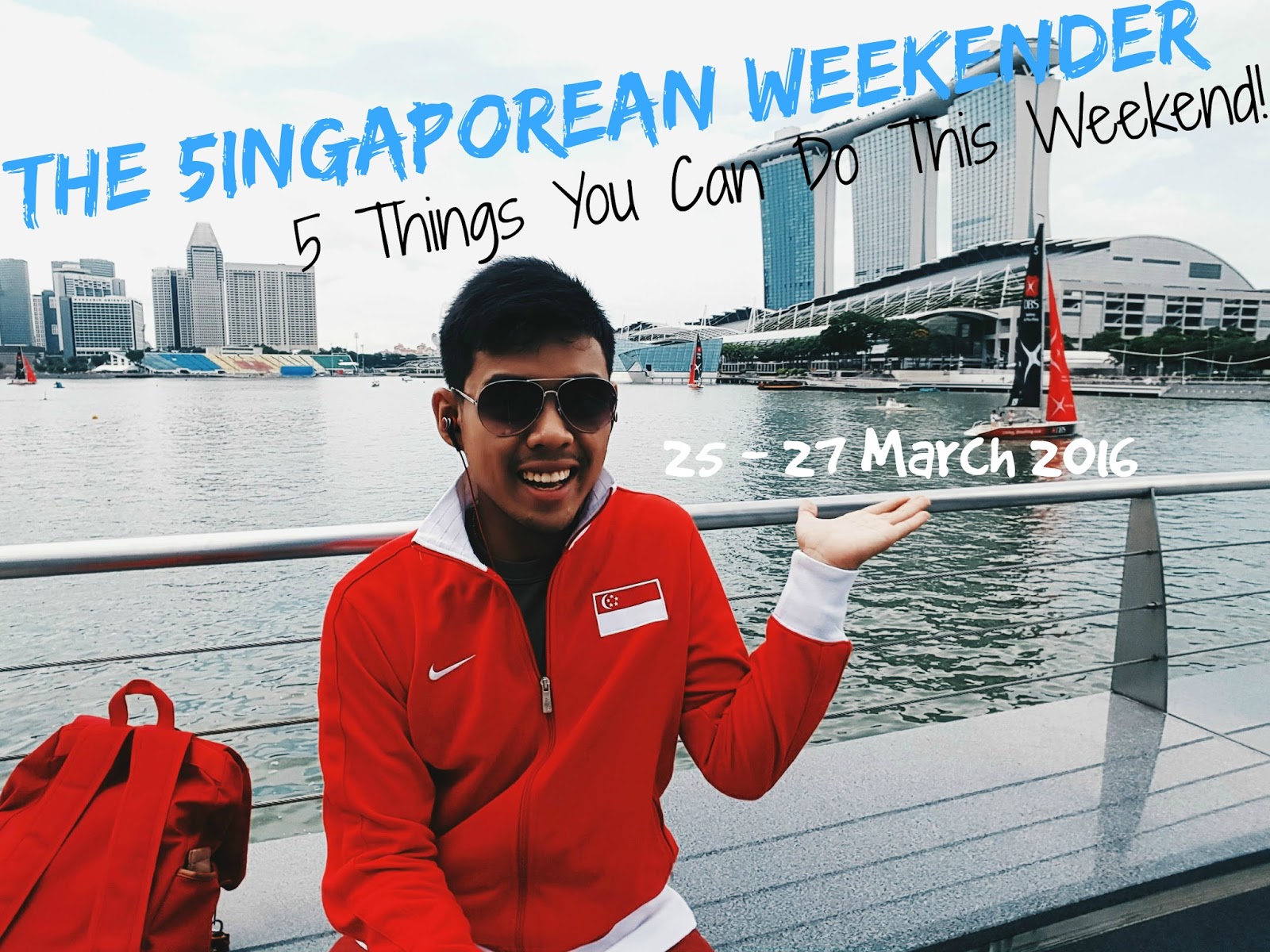 It is towards the end of March now and with Easter weekend coming up, it seems that there is definitely no places that you will find uninteresting to hand out at this weekend. Everywhere is having Easter celebrations, being it be just down below your block where the grassroots leaders organised Easter block party for the children, or at the shopping malls where there are shows and promotion going on, or (and the most obvious of all) the church where churchgoers will head there for some Good Friday and Easter sermon and then to celebrate the resurrection of Jesus.

But, well, nevertheless, for those of you who are looking for events that are ‘un-Easter’, like I do, here are 5 events that you can head to and enjoy the last week of March.

1. Gain for knowledge on how to take care of your pets at Pet Expo 2016

LOOK HERE ALL PETS LOVERS.
PLEASE LOOK HERE ESPECIALLY IF YOU ARE A PET OWNER!

There is a Pet Expo that will be going on at Singapore Expo Hall 7 from today till Sunday. Being marketed as Singapore’s ‘Largest Pet-ducational Fair’, it is definitely a must-go if you are a pet owner, or if you are considering to adopt a pet in the future.

There will be a series of informative seminars, educational workshops and entertaining contests and competition that will help you learn more about your pets needs.

Ohya, and guess what? If your pet is feeling lonely, you can bring him/her to ‘The Pawfect Match: Season 2‘. Organised by AVA, this is to help your pets to get a perfect match. Basically, speed dating for your pets. Well, you’ll never know that you might also find yourself a good match there too if you are interested in the owner of the pet that your pet is being match with.

Call that a Double-Date.

Check HERE for further details on the Pet Expo 2016.

Samsung Fashion Steps Out is back again! This year’s theme is ‘Style Parade‘. Models will be donning the latest Spring/Summer 2016 trends and walk down the runway that will stretch from Scotts Road to Bideford Road. Those fancy dress will probably give you an idea what you can buy during your next shopping (actually, you can just shop on that day itself since you are in Orchard). Brands that are participating in this Fashion Runway includes FOX Kids & Baby, Raffles Privato, MASH-UP, PHANTACi, RÊVASSEUR, SEAN & SHEILA, Thomas Wee and UNIQLO Lifewear.

Here’s the fun part if fashion is not really your cup of tea: there will be an AFTER PARTY AT ORCHARD ROAD immediately after the Fashion Runway. It is like clubbing, I promise. It features ZOUK Singapore’s anchor resident DJ Hong! And hey, there will also be pass for 700 guests to Zouk on 26 March given out so GO THERE AND PARTY LAHHHH!

Oh and did I not mention that JJ Lin will be there too?

What better way to spend my birthday than to celebrate it in style back home? Come join me in this season of love…
Posted by 林俊傑 JJ Lin on Thursday, 24 March 2016

It will be a rather star-studded event because JJ Lin and other celebrities and influencers, like Sheila Sim and Heyley Woo will be there to witness the event with you! So whether or not you are a lover of fashion or fashion design, just make your way down to the event to catch the stars. HEHE
3. Catch the stars at Marina Bay
Event: Stargazing At Marina Bay
Date: 26 March, 2016
Time: 8PM – 10PM
Venue: The Promontory @ Marina Bay
Well, if you are a nature lover and loves to enjoy a peaceful environment, you can also catch the stars! And I really mean, the stars, literally. As part of the iLight Marina Bay 2016, Singapore Science Centre will be setting up telescopes at The Promontory @ Marina Bay to allow astronomy lovers to catch the Moon and Jupiter and also, to catch the constellation: Leo (if the weather permits)!
4. Grab your electronics with Gain City
Event: Gain City’s 35th Anniversary Sale
Date: 24 – 27 March, 2016
Time: 11AM – 10PM daily
Venue: Gain City Megastore @ Sungei Kadut/Singapore Expo Hall 5A
There is always at least an activity that will cater to the different groups of people we have here. Tech gigs, here’s a chance to grab some electronics for a cheaper price when Gain City celebrates its 35th anniversary.
Located conveniently at two locations in Singapore, in the West area and in the East area, the Gain City’s 35th Anniversary Sale will definitely not disappoint. There will be large discounts in most of the products so DON’T MISS IT man!
5. Stay Healthy With some Yoga by the Bay!
Event: Yoglo @ ilight Marina Bay
Date: 26 March, 2016
Time: 7PM – 10PM
Venue: The Float @ Marina Bay
Here’s one thing that’s part of my bucket list: to exercise or do yoga by the Marina Bay. It’s like the best place to keep your mind relax with some yoga. As a frequent to the Marina Bay area (didn’t you realised that most of the to-dos that I’ve recommended are all around that area HAHAHA), I really like the sea breeze that will make you feel cool during the night. And while looking at the beautiful buildings around that area, you really appreciate the work that everyone has put in to bring Singapore to become a successful city-state.
For those of you who want to do yoga, high-intensity workout and sightseeing and enjoy the sea breeze, Yoglo @ ilight Marina Bay is definitely for you. HIIT session will kick start from 7pm to 7.30pm while Yoga will start from 8pm – 9pm. Shed some calories and keep your mind at ease, there’s not many chances where you will get to attend an event that will cater to both your physical health and your mental health!
Do sign up for Yoglo HERE!